Fresh refugee influx from Afghanistan to Turkey has stoked political and social tensions in the country where the refugee crisis is becoming more politicized. 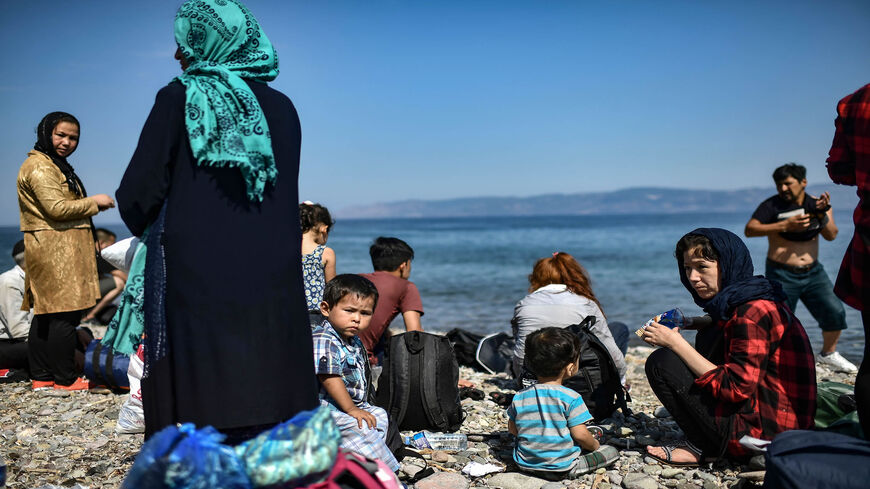 Migrants from Afghanistan arrive after crossing the Aegean Sea from Turkey with a dinghy on the Greek Mediterranean island of Lesbos, Greece, Aug. 6, 2018. - Aris Messinis/AFP via Getty Images

A surge in irregular migration from Afghanistan amid withdrawal of the NATO forces from the country has reignited already high-running anti-refugee sentiment across Turkey, catching Ankara off guard as it still lacks a comprehensive and integrated border security mechanism.

As NATO and the United States ended their operational activity and mostly completed their troop withdrawal from Afghanistan, clashes between the Taliban and the Afghan government have immensely intensified amid the militant groups’ swift territorial gains. The clashes have spurred a fresh flow of refugees toward Turkey via Iran as hundreds of Afghans escaping security risks and economic instability are seeking to reach Europe with the hope of a better life.

News reports in early July that showed a fresh stream of irregular immigrants entering Turkey on foot have further fueled the already heightened anti-refugee sentiment in the country with hashtags against refugees repeatedly becoming a trending topic on Twitter, forcing officials to take action. Turkish authorities announced July 19 that security forces have detained nearly 1,500 migrants, most of them Afghans, since July 10 near the country’s southeastern border with Iran, as well as 11 people on suspicion of human trafficking. Six of the suspects were arrested pending trial, said the statement made by the local governor’s office in Turkey’s southeastern border province of Van.

According to experts and observers, official figures have hardly reflected the actual gravity of the situation on the ground. An Afghan scholar of border security based in Turkey says the number of asylum seekers of Afghan origins entering Turkey via Iran in recent weeks stands between 1,000-1,200 on a daily basis. According to the academic, who spoke to Al-Monitor on condition of anonymity, this figure could jump to more than 2,000 by August and September should the Taliban expand its advances in the country.

The United Nations refugee agency, UNHCR, put the number of Afghan asylum seekers Turkey hosts at 125,104 in a 2020 report. Yet the academic estimates the number of irregular immigrants of Afghan origin in the country might be more than 500,000 with the recent flows.

Most of the Afghan nationals in Turkey — the second-largest refugee population in the country after Syrians — are young males ages 16 to 25. Although no specific data is available on gender and age, the number of females, toddlers and elders among the Afghan asylum seekers are estimated to be quite a few as the journey from Afghanistan to Turkey via Iran is challenging, lasting almost a month mostly on foot sometimes under difficult weather and terrain conditions. The journey costs between $2,500 to $3,000 for each person.

The Afghan nationals are deported at the highest rates in Turkey. According to official statistics, Turkish authorities caught more than 25,000 irregular immigrants of Afghan origin in the first half of 2021 with the total number of Afghan nationals caught in the past five years reaching nearly 500,000.

Ankara now reportedly fears of a possible instability in Iran that serves as a buffer zone for the refugee flow from Afghanistan. Should Iran fail to control the looming influx, the flow of Afghan nationals to Turkey can reach unprecedented levels.

In addition to an European Union-funded 140-kilometer (87-mile) border wall Turkey is building along its 534-kilometer (332-mile) southeastern border with Iran, the latest surge forced Ankara to take further measures to stop illegal migration flow. Gendarmerie special operation battalions have been transferred to three southeastern provinces — Van, Igdir and Agri — along the Iranian border, increasing the number of patrols and checkpoints at the key crossing points in the area. Authorities are aiming to deter irregular migrants through round-the-clock surveillance and ambushes. Most of those who get caught are being deported to Iran before reaching big cities such as the capital Ankara and Istanbul. However, the lack of success in preventing illegal crossings despite all the measures signifies the need for a comprehensive and integrated border security mechanism that Ankara has yet to set up along its southern borders despite decadeslong instability.

Yet the EU seems reluctant to support Ankara in the face of the growing problem of irregular immigration from Afghanistan, hinting a new chapter in refugee rift between Ankara and European capitals in the upcoming period.

Turkey’s opposition, meanwhile, seems to be falling into the trap of populism in the debate over refugees. Most recently, main opposition leader Kemal Kilicdaroglu pledged in a Twitter post July 18 to send Syrians back to their country within two years after they come to power. No one can turn Turkey into “an open prison [for] refugees. Let me tell you in advance, very tough negotiations are waiting for you,” he added, referring to Ankara's ongoing negotiations with the EU. Good Party leader Meral Aksener also often reiterates that refugees in Turkey should go back to their countries.

Turkey's refugee crisis is too important to be abandoned to political bickering and populist discourse. Yet the opposition seems to be sticking to its guns in using the issue for campaigning amid talk of early elections. The increasing politicization of the issue hampers the efforts of creating a rather more rational debate over refugees.

Ankara seems to be caught off guard as the coming months will likely see a new influx of refugees from Afghanistan amid fears of massive refugee waves. Campaign pledges such as sending refugees back to their countries will further politicize the issue, widening the gaps in the deeply polarized country and escalating tensions between the different segments of society.