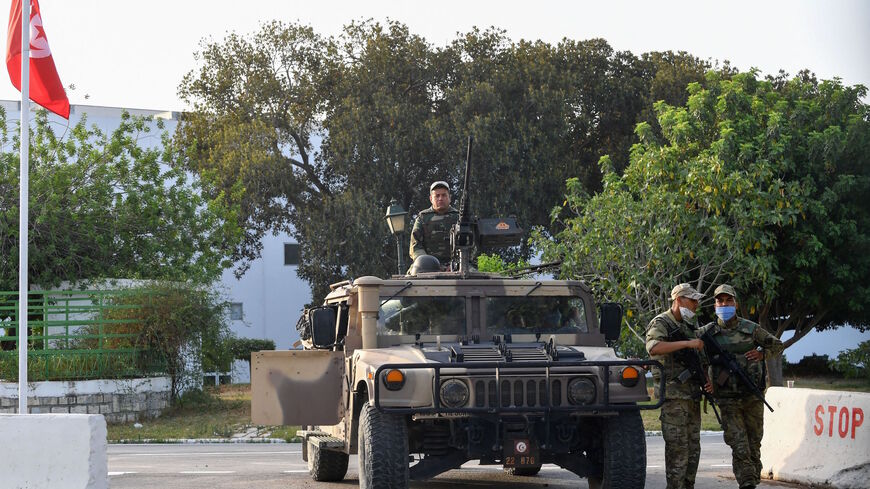 Tunisian soldiers cordon off the parliament in the capital, Tunis, on July 26, 2021, following a move by the president to suspend the country's parliament and dismiss the prime minister. - FETHI BELAID/AFP via Getty Images

Tunisian President Kais Saied has appointed Ridha Gharsallaoui to oversee the country's Interior Ministry amid a political crisis that his critics describe as a coup.

The naming of Gharsallaoui, a former national security adviser to the presidency, comes days after Saied invoked emergency authorities he said were required to tackle the North African country’s political instability.

After violent protests demanded the Tunisian government resign over its handling of the coronavirus and the economy, Saied on Sunday announced he was firing Prime Minister Hichem Mechichi and suspending parliament for 30 days or “until the situation settles down.” Saied also cited his emergency powers when stripping lawmakers of their immunity, and in recent days has dismissed a number of top government officials.

In a televised speech on Sunday, Saied said he would assume executive authority “with the assistance of a new prime minister.” The Tunisian president has pledged to name a replacement for Mechichi, whom he appointed to the premiership in 2019.

The events of the past week pose the biggest threat yet to democracy in Tunisia, a country often held up as the Arab Spring’s sole success story. Ennahda, a moderate Islamist faction and the biggest party in parliament, described Saied’s actions as “a coup.”

The White House said Monday it hasn’t yet determined whether Saied’s ousting of the government amounts to a coup. In an interview with Sky News Arabia on Thursday, US Secretary of State Antony Blinken called on Tunisia to return to the “democratic path,” unfreeze parliament and establish a new government.

“We’re urging our friends in Tunisia to move forward in a way that’s consistent with the constitution,” he said.