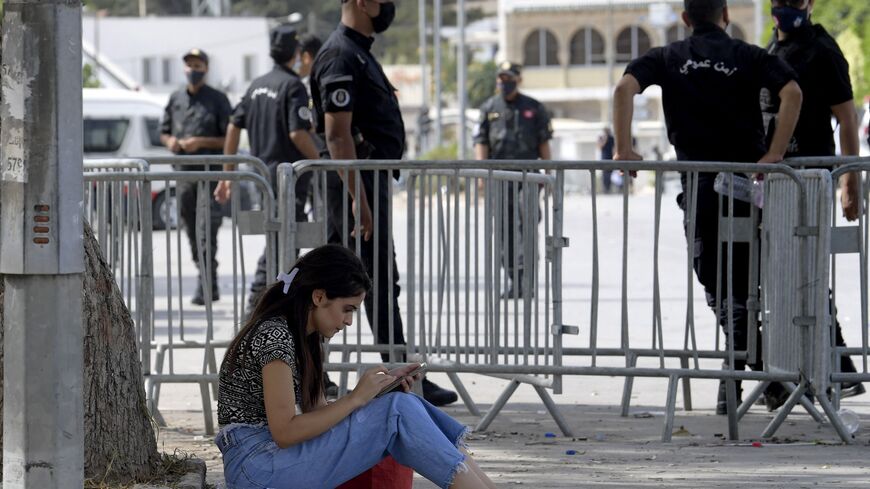 A journalist waits outside the barricaded parliament in Tunis on July 27, 2021. Tunisia, the birthplace of the Arab Spring revolts a decade ago and long seen as its sole democratic success story, was plunged into constitutional crisis this week after President Kais Saied ousted the prime minister and other officials and suspended parliament. - FETHI BELAID/AFP via Getty Images

The regional dimension. A keystone of North Africa is again in crisis. On July 25, Tunisia’s President Kais Saied dismissed Prime Minister Hichem Mechichi, suspended the parliament and ended immunity or parliamentarians and officials, whom he threatened to put on trial for corruption. He also deployed troops in the capital. On one level, the move by Saied is a move against the Islamist Ennahda party, which holds the most seats in the parliament and is associated with the Muslim Brotherhood. The action by Saied and the military is therefore perceived, at a regional level, as a blow against Turkey, Qatar and Libya, whose governments are considered close to the Brotherhood. The buzz is that Egypt, the UAE and Saudi Arabia are all in behind Saied’s actions against Ennahda.

"Downside risks dominate." But Saied’s actions, which opponents are describing as a coup, come in the context of popular demonstrations and overall frustration with a collapsing economy.

In February, an International Monetary Fund report on Tunisia warned that the COVID-19 pandemic was "exacerbating Tunisia’s socio-economic fragilities." Tunisia’s vaccination rate has been unusually low, even by regional standards, at about 7%. The country has had over 575,000 cases of COVID-19 and nearly 19,000 deaths — with a population just under 12 million people. While the IMF anticipated "modest" economic improvement this year, it also has warned that "downside risks dominate" and that public debt could become "unsustainable." Gross domestic product last year contracted by 8.2% with official unemployment jumping to 6.2%, accompanied by a sharp increase in the fiscal deficit and public debt.

On the streets, it’s all about the economy. "For the past six months, Tunisia has been suffering under the weight of political insecurity, and a political class who have cared more for personal politicking than for finding the much-needed real solutions to Tunisia’s collapsing economy, the weakening dinar and the growing disparity between rich and poor," Elizia Volkmann reports this week from Tunis.

Whither Tunisian democracy? The State Department said this week it is "closely monitoring developments in Tunisia" and that the United States stands on the side of "Tunisia’s democracy." Tunisia is where the Arab Spring began in 2010. Jeffrey Martini, senior Middle East researcher at RAND, cites polling data that Tunisians have had their own doubts about "the efficacy of democratic governance. They saw negative effects of democracy on economic performance and maintaining stability," Martini noted in an email to Al-Monitor. "These are indicators that an opportunity existed for political leaders looking to consolidate power.”

Read more: Amberin Zaman explains here why Turkey’s reaction to Saied’s moves against Ennahda, while critical, were less incendiary than might have been expected.

President Joe Biden met Monday at the White House with Iraqi Prime Minister Mustafa al-Kadhimi and declared afterward that the US military’s role in Iraq will no longer include combat troops by the end the year. As Jared Szuba points out, the US-led coalition had already wrapped up combat operations in Iraq last year as troops transitioned to a Baghdad-based advisory role.

But Biden and Kadhimi also made clear that the US-Iraq security partnership will continue to ensure that the Islamic State "can never resurge and to allow communities recovering from terror to rebuild with dignity." That will require collaboration because, as Shelly Kittleson reports, the Islamic State is still committing acts of terror such as the recent bombing in the predominantly Shiite Sadr City district of Baghdad and is stoking sectarian tensions in Iraq’s communities.

As scorching summer temperatures drive up the demand for air conditioning across the Middle East, Sebastian Castelier examines the many pledges made by wealthy Gulf countries to clean up their fossil fuel-driven power grids. Saudi Arabia, for example, plans to generate 50% of its electricity from renewables by 2030. Qatar’s first-ever solar plant will start operations ahead of the 2022 FIFA World Cup.

“A recent push to decarbonize the global economy, and in particular the transportation and power generation sectors, is enticing oil-rich Gulf states,” Castelier writes. There is room for regional cooperation on renewable energy, if regional rivalries can be held in check. It’s not as if there isn’t long precedent for the region collaborating — and sometimes feuding — over energy. The last time it was over oil, this time it will be over the generation, storage and transmission of solar-produced energy.

It’s not entirely clear to Israeli defense officials why Moscow made the announcement, Ben Caspit reports. Were Rear Adm. Vadim Kulit’s comments a slip of the tongue? Was it a trial balloon, signaling Israel to pull back its air campaign in Syria. “Some suggest Russia is also jockeying to improve its position in the region following the change of administrations in Washington and Jerusalem,” Caspit writes.

The withdrawal of NATO and US forces from Afghanistan has triggered a new wave of refugees bound for Turkey, fueling anti-immigrant sentiment among Turks who already resented playing host to the world’s largest refugee population, mostly from neighboring Syria. Metin Gurcan writes about the influx of Afghans fleeing their country in hopes of finding a better life in Europe. But the backlash against the newcomers is growing, with anti-refugee hashtags trending on Turkish Twitter. Meanwhile, border police are stepping up surveillance and deportations to stem the flow of Afghan refugees arriving at Turkey’s southern border.

After Turkey drew international scorn for the planned partial reopening of an abandoned settlement known as Varosha, Fehim Tastekin explains how long-divided Cyprus is serving as nationalist fuel for President Recep Tayyip Erdogan, whose recent actions raise the specter of Turkey’s eventual annexation of Northern Cyprus. Earlier this month, Erdogan announced Turkey would help build a presidential palace and new parliament building in the self-declared Turkish Republic of Northern Cyprus. “Turkey has always had a decisive say in Turkish Cypriot affairs,” writes Tastekin. “But Erdogan feels entitled to dictate, eating into the autonomous space that Ankara has traditionally left to the Turkish Cypriot leadership.”

Plus, Rina Bassist has the backstory on why the Israeli government is expressing concern over Turkish provocations in Northern Cyprus. Israel has traditionally stayed relatively mum on the dispute, in part because it feared the international community would draw parallels between Turkey’s actions and Israel’s own occupation of the West Bank. But a recent head-of-state reception offered by Jerusalem to the Cypriot foreign minister, combined with recent statements, suggests Israel is firmly siding with Greece and Cyprus over Turkey.

In this week’s “On Israel” podcast, Ben Caspit gets NSO Group’s side of the story after a sweeping investigation linked the Israel-based company’s malware to possible hacks of journalists, activists, business leaders and even heads of state.

For the first time, an Egyptian song is getting the Marvel Studios treatment. The soundtrack for the newly released “Black Widow” movie features the song “Atshan Ya Zeina” (“I’m Yearning, Zeina”) by the Egyptian alternative band Gawy. “It’s a huge success for any band to take part in a Marvel production, a step toward having an international presence,” one of the band members told our correspondent in Egypt. Learn more here about Gawy’s musical style, which combines poetry with a blend of Eastern and Western influences.

The IMF projects the global economy will grow by 6% in 2021, but the recovery in emerging and developing economies hinges on vaccine access. In the Middle East, regional GDP growth is forecast at 4% following’s last year’s 2.6% dip. Non-oil growth projection in Saudi Arabia has been revised up, but the Washington-based fund has downgraded the kingdom’s overall GDP forecast. Read the IMF’s latest World Economic Outlook report here.