A report from the World Bank, United Nations and European Union found that the 11-day conflict caused between $290 and $380 million in physical damages alone to the Palestinian enclave. 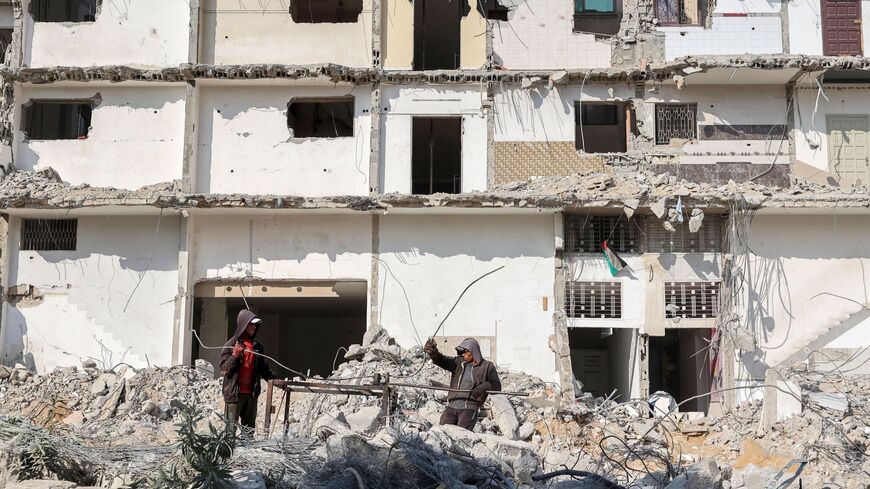 Palestinian workers recycle metal rods from the rubble of a building destroyed by Israeli airstrikes during May's 11-day conflict, in Gaza City on June 29, 2021. - MOHAMMED ABED/AFP via Getty Images

The impoverished Gaza Strip requires up to $485 million to fund immediate and short-term recovery needs following the recent conflict between Hamas and Israel, according to a new report from the World Bank, United Nations and European Union.

The trio’s Rapid Damage and Need Assessment was set up to estimate the losses incurred from the most serious round of Israeli-Palestinian fighting since the 2014 conflict. The 11 days of fighting left more than 260 dead in Gaza and 12 in Israel, according to officials on both sides.

“This is yet another unfortunate episode in which the Palestinian people in Gaza saw themselves in the midst of conflict and destruction,” said Kanthan Shankar, the World Bank’s director for the Palestinian territories. “With this assessment, we hope to mobilize donors’ support to help restore dignified living conditions and livelihoods in Gaza, and lead the way to recovery.”

Before an Egyptian-brokered cease-fire took effect May 20, Hamas and other Palestinian militant groups fired more than 4,300 rockets toward Israel from Gaza. Militants in the besieged Palestinian enclave were targeted by over 1,500 Israeli strikes.

The new report found that Gaza’s housing sector makes up the majority of the estimated $290 million to $380 million in physical damage caused by the barrage of air attacks. Roughly 4,100 housing units were impacted by the Israeli offensive, and the bombings also damaged utilities and infrastructure, including transportation, water and sanitation.

In addition to the physical toll, economic losses caused by an interruption in production and services sit between $105 million and $190 million, the report said. Over the next two years, the report estimates recovery and reconstruction needs at $345-$485 million.

Humanitarian support is desperately needed in the Hamas-run Gaza Strip. Military conflict with Israel, internal political instability and an Israeli-Egyptian blockade imposed since 2007 have crippled Gaza’s economy and left a majority of the territory’s 2 million Palestinian residents without clean drinking water, reliable electricity or a proper sewage system. Even before the latest escalation, Gaza’s unemployment rate hovered around 48%.

The report estimates that Gaza’s gross domestic product will shrink by 0.3% in 2021, compared to a growth rate of 2.5% predicted before the latest conflict. If the security situation remains stable, the report says the economy may rebound in 2022.

“In the short term, socioeconomic recovery in Gaza will be determined by two factors: the level of available financing, including from donors, for reconstruction activities; and the extent of the restrictions on movement and access of people and goods entering Gaza, particularly the supply of essential reconstruction materials,” the report said.

The report also called on the international community to help provide psychosocial support as well as assist with the restoration of social protection systems, social and municipal services and private sector activity.