Spain's elite soccer club has not confirmed it will play the Israeli team Beitar Jerusalem. 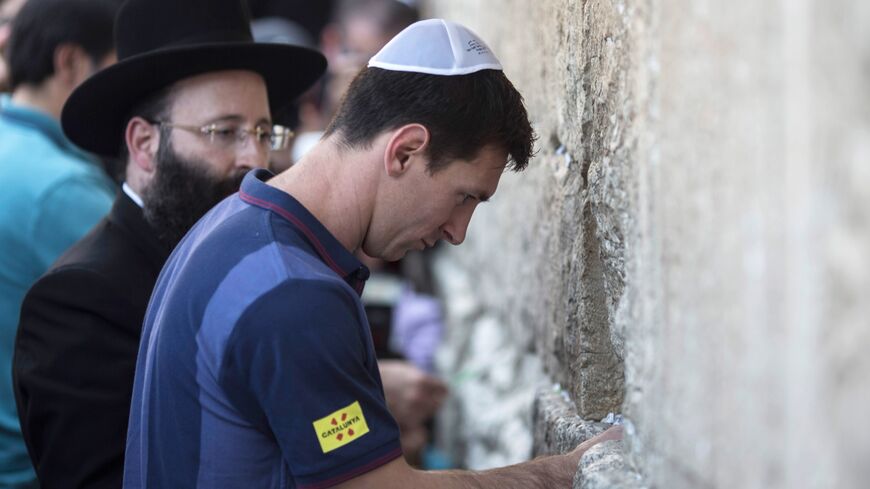 Will FC Barcelona soccer star Lionel Messi (R) return to Jerusalem this summer? Here, the Catholic player places a piece of paper with wishes in a crack in the Western Wall on Aug. 4, 2013, in Jerusalem. Members of FC Barcelona had traveled to the Middle East to visit Israel and the West Bank as part of a two-day "peace tour." - Photo by Oliver Weiken-Pool/Getty Images

A top European soccer team is under fire for reportedly planning to play an Israeli team, though the game is not confirmed.

On Friday, a group of Palestinian soccer teams published an open letter to FC Barcelona urging the club to cancel a soccer match against Beitar Jerusalem, according to the boycott, divestment and sanctions (BDS) movement. The purported international friendly is set to take place Aug. 4 in Jerusalem’s Teddy Stadium. The Palestinian teams said the event is an effort to distract from Israeli human rights abuses against Palestinians.

“As your colleagues, and as athletes who share a passion for sports and fair play, we don’t want to see your passion and name being abused by anyone, especially not by apartheid Israel’s propaganda in its desperate attempt to sports-wash the state’s continuous violations of international law and crimes against our Palestinian people,” the teams said, according to BDS.

BDS supports a variety of boycotts against Israel and Israelis, including in the cultural sphere, in opposition to Israel’s treatment of Palestinians. The statement specifically cited the Sheikh Jarrah neighborhood, where local Arabs are engaged in a property dispute with a group of Jews.

Beitar Jerusalem is notorious for having nationalists and anti-Arab racists among its fan base. The team has tried to clean up its image recently. Last year, an Emirati investor purchased a 50% stake in the club, which was praised by some fans.

FC Barcelona is based in the eponymous city in the autonomous Catalonia region of Spain. The team and its star Lionel Messi are tremendously popular in the Middle East, and all over the world.

However, on Sunday, the Palestinian Authority’s official WAFA news agency reported that it received a letter from FC Barcelona saying the club has not confirmed any match with Beitar.

A Palestinian soccer body had also protested the purported match, due to Beitar Jerusalem’s stadium being in the Malha neighborhood of Jerusalem, according to WAFA. The neighborhood was inhabited by Arabs before the 1948 Israel-Palestine war, but the community left during the conflict. Some Israeli scholars say they fled, while some Palestinians maintain they were expelled.

FC Barcelona representatives did not immediately respond to Al-Monitor’s request for comment.

FC Barcelona is not new to the complexities of the Israeli-Palestinian conflict. The team visited Israel and the Palestinian territory the West Bank in 2013 for a peace-focused tour.