Israeli soccer club calls off match with Barcelona in Jerusalem

Faced with pressure by pro-Palestinian elements, Barcelona preferred having its soccer game against Beitar Jerusalem canceled, rather than play in Jerusalem. 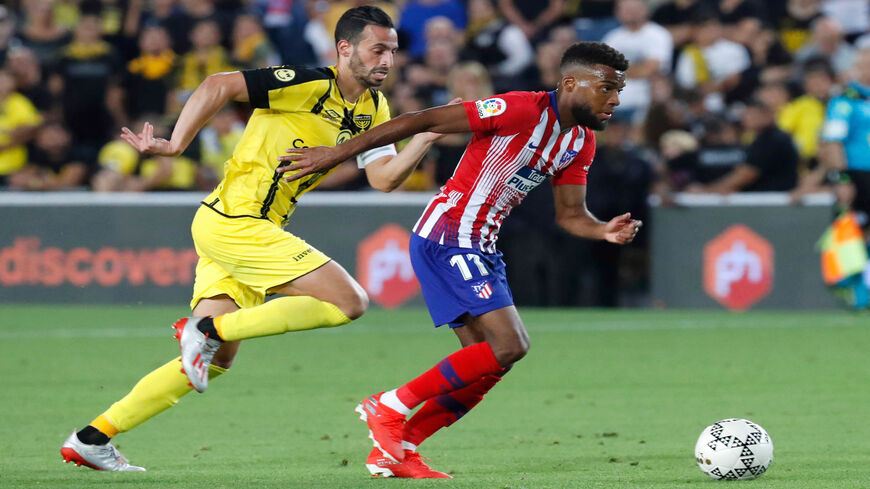 The friendly exhibition match between Israeli soccer club Beitar Jerusalem and Spanish super team FC Barcelona, scheduled to take place Aug. 4, ended up being canceled, after the Catalonian team refused to play in Jerusalem, stay in Jerusalem and take a tour of the city.

“It is with great regret that I am forced to cancel the game against Barcelona,” Beitar owner Moshe Hogeg announced on his Facebook page July 15. This was followed by an explanation as to why the game was being canceled. “It was only when I received the contract that I first encountered the unequivocal demand that the game not be played in the capital, Jerusalem, as well as several other demands that I did not like. I went to sleep that night feeling broken-hearted. I thought a lot about it and decided that I am a proud Jew first and foremost. It is only fitting that the game against Beitar Jerusalem should take place in Jerusalem. I could never live with myself if the game wasn’t being held there for political reasons, and I succumbed to that.”

It is important to point out that the game’s cancellation was preceded by an appeal by Knesset member Sami Abu Shehadeh of Arab party Balad to President of FC Barcelona Joan Laporta, stating that his team coming to play against Beitar in Teddy Stadium, which was built in a neighborhood that sits on the land of a former Palestinian village named al-Malha, would be granting legitimacy to a team “that represents the most extremist, racist and fascist segments of Israeli society.”

Contrary to most other national soccer league clubs in Israel, Beitar Jerusalem has never signed up an Israeli-Arab player, though they did sign up a few Muslim players over the years.

The point of Shehadeh was echoed in a letter by President of the Palestinian Football Association Jibril Rajoub to FIFA, asking to intervene and prevent the game from taking place. “Although we have no right to tell any club how to schedule its exhibition games, we do have a right to oppose the choice of Jerusalem as the venue for this event. According to international law, Jerusalem is a divided city, and its eastern half is considered occupied Palestinian territory. This gives the Palestinian Football Association authority over all football matches that take place there.”

Reports before the cancellation said Lionel Messi might not arrive to Israel. These reports said the management of the team preferred offering him some vacation after the Copa America. Beitar Jerusalem rejected these reports at the time, and it is unclear if this had anything to do with the cancellation of the game.

Be that as it may, evidently, the Spanish team came under intense pressure to cancel the game, or at the very least to relocate it. In the end, it was canceled, much to the chagrin of the Jerusalem team’s fans. As Ofir Saloniko, an avid supporter of Beitar Jerusalem, told Al-Monitor, “As a sports fan I am of course disappointed that the game was canceled. Who wouldn’t want to see Barcelona with all its stars? But everyone knows that sporting events are never just a game, and that this is especially true about soccer."

He said, "The considerations are perfectly clear to Barcelona. What soccer club wants negative publicity? But for better or worse, Beitar is more than just a soccer club. In these days of national self-deprecation, giving up on having the game in Jerusalem will be difficult to swallow for many Beitar fans. In other words, Beitar Jerusalem is mas que un club [‘more than just a club,’ citing the FC Barcelona slogan].”

The truth is that this is not the first time a friendly game in Jerusalem has turned into an international incident, and that it would prevent Israeli soccer fans from seeing international soccer stars like Messi. Something similar happened as recently as 2018, just before the World Cup in Russia. Then, the Argentinian national team announced that it would not be coming to Jerusalem for a match against the Israeli national team in preparation for the World Cup. Ironically, the Argentinian team even suggested that the game be moved to Barcelona. Back then, the cancellation came about in response to pro-Palestinian demonstrations and opposition by the Palestinian Football Association to the match being held in Jerusalem.

This only underscores the fact that Jerusalem is still a burning issue in the international arena. Israeli politicians can make bombastic statements about a “united Jerusalem," but the fact is that several parts of the world do not accept that.

What do Arab sports fans have to say about the game’s cancellation? The overall impression is that they are not particularly disappointed about it. Thair Abu Rass, a researcher at the University of Maryland, happens to be a fan of Barcelona. He told Al-Monitor, “It’s good to see Barcelona paying heed to the criticism. As a team, Beitar Jerusalem has no connection with the ethics of soccer or the UEFA slogan, ‘Say no to racism.’"

He noted, "If Barcelona wants to boost its ties with the Israeli market, it would be better served collaborating with a team that represents minorities in the country like [Israeli-Arab] Bnei Sakhnin or with teams that uphold UEFA principles like HaPoel Tel Aviv. In any event, Barcelona made the right decision. It would be best if every European soccer club that wants to cooperate with an Israeli counterpart would check the club out with its embassy first, because racism is still in many ways part and parcel of the Israeli mainstream.”

Waseem Mawasi, who loves Spanish soccer, is a fan of Real Madrid. For him, Beitar Jerusalem is not really a match for Barcelona, and he sees no justification for such a match. But he makes another point, which is more political. “A team that represents the Catalonia region, whose residents claim is occupied by Spain, cannot afford to put itself in such a sensitive position, given everything that is happening in Jerusalem and to the Palestinian people.”