Israeli soccer fans divided over who's to blame for canceled match

Israelis blame anyone they can for the cancellation of Argentina’s national soccer team and its star Lionel Messi’s visit to Israel: the Palestinians, BDS, Minister of Sports Miri Regev. 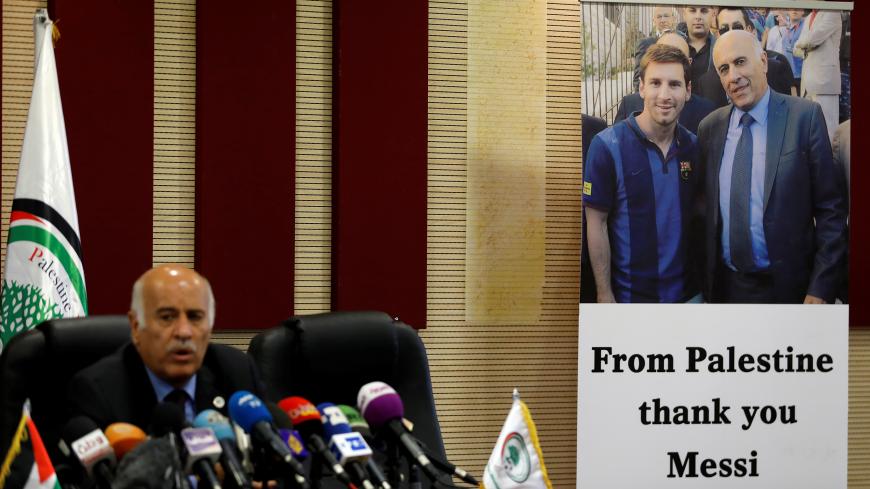 The Argentine soccer team canceled its June 9 exhibition match in Israel, which stirred up emotions among the public and the media. On the one hand were those who blamed the Palestinians; the Boycott, Divestment and Sanctions movement (BDS); the “cowardly” Argentinians; and any and all others. On the other hand were those who denounced the “political” decision of Minister of Culture and Sport Miri Regev to move the game from Haifa to Jerusalem, arguing that this caused the cancellation of the game.

Soccer fans in Israel — on the right and on the left — are disappointed that they won’t be hosting one of the best teams in the world and its big star, Lionel Messi.

Uri Cohen, 12, from Ramat Gan, sobbed when he heard that Messi, his idol, will not come to Israel, saying that his dream will not come true “because of bad people.” His father, Aviram Cohen, told Al-Monitor that he had finally succeeded, after much trouble, in getting tickets to the game as a birthday present for his son.

The sale of tickets was also shrouded in scandal, when it turned out that few tickets were available to the wider public, with most tickets having been reserved to those in politics and business. On May 31, the state comptroller even announced that he would look into this issue because of the many complaints.

Cohen is furious at the Palestinians and their supporters, whose protest he believes led to the cancellation of the game. “The Israeli team has five Arab players,” he said, “and then the Arab members of Knesset opposed the plan to hold the game in Jerusalem and supported the Palestinian and BDS demand that the Argentine team not come here.”

The Argentinian team was supposed to play against the Israeli team as a final warmup game before the World Cup, which will begin June 14 in Russia. The Palestinian Football Association demanded that the game not take place, and its president, Jibril Rajoub, even threatened to "burn Messi’s shirts." This week, during the Argentine team’s training in Barcelona, BDS activists protested the team by holding up red-painted team shirts. According to various reports, families of some of the players received threats. The pressure worked, and on June 5, it was announced that the team would not come to Israel.

“Protests and murder threats against players if they play in Jerusalem? I want to see how the world reacts if they threaten to kill players who come to play in Paris,” Jerusalem resident Tzviya Zizi told Al-Monitor. “It’s easy to talk about Miri Regev or [Prime Minister Benjamin] Netanyahu, bury your head in the sand and shut your eyes to the atrocities taking place in the world. Sadly, there are some who only feel hate. It’s too bad they bring politics into sports.”

Uriel Harel, from Beersheba, places the main blame on Regev. According to him, the game should have been played as initially planned in Haifa, and Regev’s insistence on spending millions of the public’s money on moving the game to Jerusalem was uncalled for. “The involvement of deal-makers and politicians in sports doesn’t bring about anything good,” he said. “They do so only in return for favors. They have taken sports from the fans in order to benefit from it.”

Meir Raz from Ariel said that the Palestinians would have tried to cancel the game even if it had taken place in Haifa. He added, “But in any case, Miri Regev played into their hands when she moved the game to Jerusalem. From that moment, the Argentinian players and the coach preferred to refrain from getting into political disagreements that do not concern them and canceled [the game].” Raz was concerned that canceling the game would lend legitimacy to canceling the Eurovision Song Contest in Israel next year. “It’s too, too, too bad that we didn’t get to see this terrific team play in Israel.”

Itzik Shukrun, from Jerusalem, sides with Regev, since he believes her role as minister of sport is to intervene in the national team’s games. “All over the world when there is an event or a big game, they hold it in the capital. It's only forbidden for us?” he said.

Tom Mehager, a social activist, told Al-Monitor that Israel causes Palestinian suffering, “and so it is right not to hold an event in Jerusalem as if it is business as usual.”

Ilanit Dahan of Kiryat Shmona told Al-Monitor that the Palestinian Authority (PA) is waging a policy of diplomatic terrorism against Israel, and that “the cancellation of the game is only one of the steps that they have managed to take in their diplomatic terrorism. The one responsible is Jibril Rajoub who pressured Argentina by means of the BDS movement. It is easy to pile on Miri Regev. I wonder why there are Israelis who find it hard to agree that the cancellation of the game is a result of the PA’s harassment.”

Oren Feld, from Jerusalem, said that the decadeslong political diplomatic situation and Israeli conduct is to blame. He told Al-Monitor, “If the organizers in Israel did not understand that it would lead to canceling the game, they are stupid. For them to invent terrorism and threats — it is simply populist, inciteful and divisive behavior. I’m Argentinian on my dad’s side, and this has caused me to support the Argentinian team even more.”

The Argentinian team has visited Israel several times in the past before a World Cup. As the team won the World Cup twice after visiting Israel, some say that visiting Israel beforehand is considered good luck for them.

Yossi, from the Tel Aviv area, told Al-Monitor that he hopes that canceling the game would bring bad luck to Argentina. “Too bad that politics won and Israeli fans have to suffer for it,” he said. “Because of the cancellation, I will root for Argentina’s rivals in the World Cup. They are hypocritical — like there are no other wrongs in the world, only in Israel.”