The legendary FC Barcelona soccer team enthused the West Bank and Israel during its peace tour on Aug. 3-4. 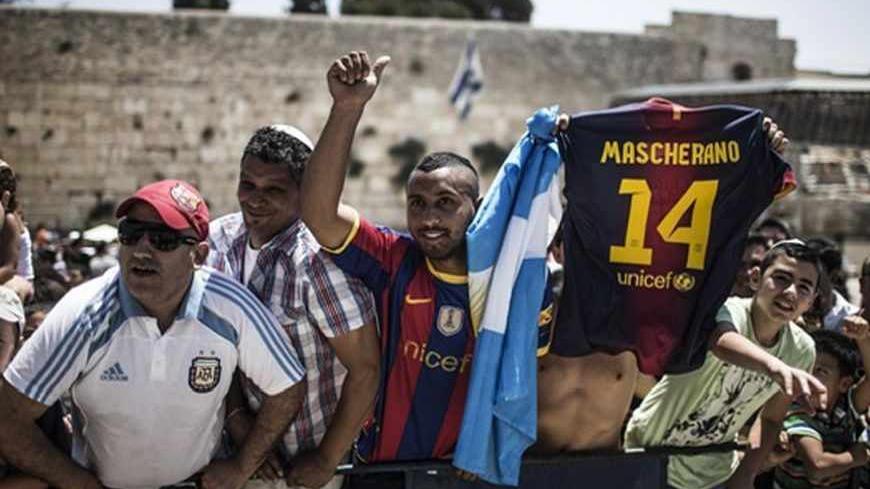 Sports brings people and nations together. In most cases, all anyone has to do is bring together a group of people who love tossing around a ball or playing some other competitive sport, and they will find a way to overcome differences of age, gender, language, class and culture to create a fan base or exchange stories about the most exciting moments of the game. Sports can even fix the wrongs inflicted by politicians and religious leaders alike. It has potential to cross the deepest chasms and overcome the most daunting barriers.

People have known and respected this ever since the first athletic competitions began in ancient Greece. It was there that a wonderful tradition began. Sports were used to promote peace. The tradition lasted for 1,100 years, until 394, when Emperor Theodosius I finally extinguished the Olympic torch. It would not be lit again for another 1,500 years, in 1896.

Sports teams nowadays — especially soccer and basketball teams — recruit regardless of players' nationality or religious beliefs. All they need to play are those traits essential to be a successful athlete: fitness, perseverance and talent. That is how sports clubs are built in the modern era, as they strive to reach as many fans as possible, who will watch them on the field, on TV and the Internet.

Every ambitious soccer player with an outstanding record playing for his local team dreams of one day being selected by one of the great international soccer clubs: Barcelona, Real Madrid, Manchester United, Liverpool, Bayern Munich. As the best teams in modern soccer, their reputations precede them.

Barcelona’s team (Barca) is one of the most admired soccer clubs in the world among fans — no matter who the players are. Just about every game it plays becomes a major sporting event. Barca players such as Lionel Messi and Andrés Iniesta are superstars and sports idols just about everywhere in the world.

On Aug. 3, the team and its coaches showed the people of the Middle East — who have long been locked in conflict — how easy it is to overcome disputes and differences, cultural clashes and conflicts. Upon landing at Ben Gurion Airport in Tel Aviv, the team immediately made its way to a friendly training match in the village of Dura, near Hebron (Palestinian Authority). Thousands of Palestinians — young and old — showed up to see Messi and his teammates play on the local soccer field. Not long ago, Palestinians would never have dared dream that the objects of their adoration would appear in real life to play right before them.

Barca's players showed up for another friendly training match on Aug. 4 — this time in Israel — sponsored by the Peres Center for Peace. Thousands of young Jews and Arabs were invited to see them play. Players from the great Barca were keen to join the regional peace initiative, while Israelis and Palestinians were engaged in peace talks in Washington.

On Aug. 6, FC Basel will play Israel for a rematch against Maccabi Tel Aviv in the UEFA Champions League’s qualifying matches. The Swiss team has won quite a bit of praise since winning the Swiss Super League championships every year for four consecutive years (2010-2013), and has started to recruit talented soccer superstars from around the world. Last season, the team even made the semifinals of the European Championship.

Egyptian players Mohamed Salah and Mohamed El-Nenny are two of FC Basel’s recent acquisitions. After the first game in Basel on July 30 — in which his team beat Maccabi Tel Aviv 1-0 — Salah was quoted by the Egyptian media as saying: “Allah gave me the very strange idea of not shaking hands with the Israelis. Instead of following protocol and shaking their hands, I decided to change shoes instead [on the sideline], using this as an excuse to avoid shaking hands with the Israelis.”

By refusing to shake hands with his opponents, Salah avoided a long-established custom in just about every type of sports: shaking hands with the opposing team. He later asked his team’s management to release him from his responsibility to play in the rematch in Tel Aviv.

This behavior by Salah, as well as by his teammate Nenny, gives a bad name to professional sports internationally. For anyone who might have forgotten — or who is trying hard not to remember — there is a peace treaty between Israel and Egypt. It may be a cold peace. There may be no effort to normalize relations. Nonetheless, the peace has been preserved, even by the Muslim Brotherhood.

Salah later bragged about his “heroic” refusal to shake hands with any Israeli. The truth is, he actually left me feeling quite confused. During this last year, Israelis — myself included — discovered the “Hebrew speakers” of Egypt. Yes, they are a small group consisting mainly of students who support normalization with Israel, but they filled Israelis with hope and gave them the impression — mistaken as it may have been — that they are part of a larger group of people who are fond of Israel’s language and culture. I really wanted to believe that even if they do not constitute a majority of Egyptians, they still represent a large group that is swimming bravely against the stream.

Through them, many Israelis kept tabs on what is happening in Egypt. In many ways, it was this group that caused Israelis to admire the millions of Egyptians who took the future of their country in their own hands and proved that when the masses work together in the name of liberty, dictators, presidents and governments can be toppled. I believed that toppling dictatorships would bring sanity and goodwill along with it.

Then came soccer player Salah. Instead of bringing the two peoples together, he struck out at anyone who believes that sport is intended to build bridges of peace and tolerance.

The management of FC Basel did not release Salah and Nenny from the rematch. In fact, they will be forced to play in the Tel Aviv-Jaffa Bloomfield Stadium before thousands of Maccabi fans. Were it not for the shameful behavior that these two players displayed, those fans will get up on their feet and cheer for the representatives of the Egyptian people, who are fighting so bravely for their freedom.

Will Salah pretend to tie his shoelaces again at the end of this match in Tel Aviv, just to avoid shaking hands with the Israeli players?

I have no advice for anyone who feels the need to tie his shoelaces instead of shaking hands, but I would like to make a recommendation to the thousands of Maccabi fans, who will cheer on their team. Greet Salah and Nenny with a resounding round of applause. Cheer every deserving sportive performance they make on the field. Let them see the good side of soccer fans in Israel and around the world, who cheer on their teams and sometimes boo their rivals, but who also respect talent, skill and good sportsmanship on the playing field.

Show them that Israelis are very concerned about the terrible bloodshed in their homeland, Egypt, and that we do not regard them as enemies. Let them see and feel this, and let them somewhat be ashamed as well as realize the impact their actions have left on international sports.