Knesset member Miri Regev has called for suspending the Arab-Israeli Bnei Sakhnin soccer club from the Israeli league over the raising of Palestinian flags during a match, ignoring racist actions by Jewish rival fans. 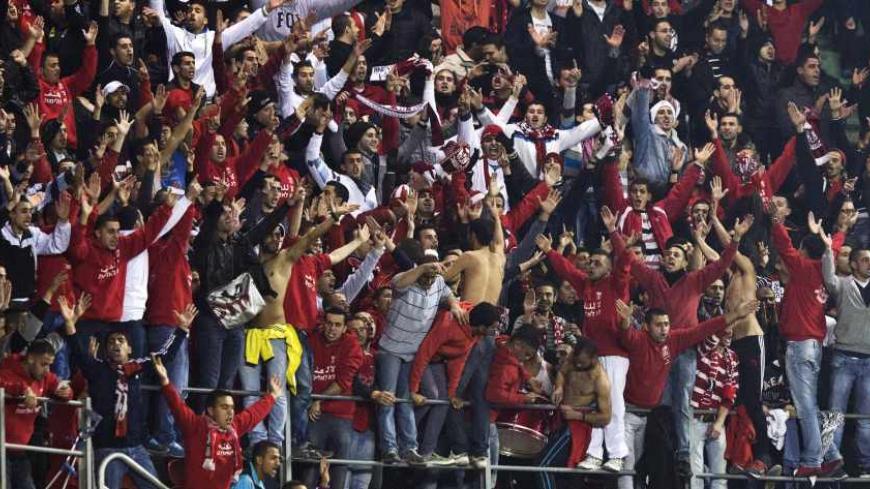 Fans of Bnei Sakhnin shout slogans during a match against Beitar Jerusalem as part of the Israeli Premier League at Teddy Stadium in Jerusalem, Feb. 10, 2013. - REUTERS/Nir Elias

Arab-Israeli soccer players have always played on various Israeli soccer clubs. Rifaat Turk and Zahi Armali were pioneers in this field, and in their time, served as role models. In the course of their careers on the field, they starred in the Israeli national soccer team and represented the State of Israel. They paved the way for other Arab-Israeli players, among them Salim Toameh, Abbas Suan and Walid Badir — the latter a record holder in the Arab sector (having taken part in 74 games with the Israeli national soccer team). At present, there are three Arab-Israeli players on the national team roster.

But there is one Israeli soccer team in particular — the Israeli soccer club Beitar Jerusalem — whose fans have become known as the embodiment of racism and hatred, as reflected in their objection to the participation of Muslim players in the team.

During the last soccer season, two Muslim Chechen players joined Beitar Jerusalem. The club's fans were beside themselves with rage. They showed up on the field when the team had its training sessions and disrupted the training, cursing and spitting. At the end of the first league game in which the Chechen players took part, police had to escort them off the field after a number of fans tried to physically attack them. At the height of the crisis, some of the fans set fire to the dressing room at the club. Finally, at the end of the season, the Chechen players left the team, with a bitter image etched in their memories — that of Israel as a racist state.

The racism of Beitar Jerusalem fans is generally reflected in the matches against the Arab-Israeli soccer club Bnei Sakhnin, the major club in the Arab sector. Bnei Sakhnin first made it to the Israeli Premier League in 2003, and then went on to win the State Cup in 2004, the first time in the history of Israel that a team from the Arab sector won.

At the Bnei Sakhnin soccer club, Jews play side by side with Arabs, and the club has Jewish fans as well. It is a soccer club like any other. However, every soccer game between Bnei Sakhnin and Beitar Jerusalem turns into an event that has nothing to do with sport. Every such match is a potential conflagration. Every game between the two teams becomes the arena of a political brawl that goes on even after the game has ended and the players and fans have left the field.

In the Dec. 17 game between the two teams, some Bnei Sakhnin fans waved Palestinian flags. At the same time, several Beitar Jerusalem fans ripped up a copy of the Quran and burned its pages.

In response, Likud Knesset member Miri Regev announced that she would take action against Bnei Sakhnin and expel the club from the Israeli national league. She wrote on her Facebook page, “The situation where a [soccer] club receives support from the State of Israel as part of its sports-sponsorship policy, while the club fans are waving the flags of Palestine, is unacceptable.” She assured readers that she would take prompt action to suspend the team and do her best “to introduce legislation on the issue.”

Regev blatantly disregarded the burning of the Quran by the Beitar Jerusalem fans and made no reference to the racism that characterizes many of these conflicts. The only thing that bothered her was the waving of Palestinian flags by fans of the Arab team.

A soccer aficionado who happened to attend the match at Doha Stadium in the Arab city of Sakhnin told me that, in fact, only two small flags were waved in one of the stadium galleries, and most Bnei Sakhnin fans behaved in a civil manner and were calm. And when they realized that he was a Jew and not one of the Beitar Jerusalem fans who showed up at the game to provoke and antagonize them, he was invited to coffee after the game by more than one of the team's fans.

Religion and nationality have nothing to do with soccer. Indeed, soccer can potentially bridge gaps and bring people together on behalf of a common cause. Winning and achievement — that’s the essence of sport. Cooperation and confidence in the other are the cornerstones of team sports.

Abbas Suan, a former captain of Bnei Sakhnin, played in the past for the Israeli national soccer team. In his fourth game with the national team in February 2005 at Teddy Stadium in Jerusalem — the home stadium of Beitar Jerusalem — he was greeted with jeers and catcalls from the Beitar Jerusalem stands when he was called on to replace a player. His colleagues in the national team backed him and condemned the racist shouts leveled at their friend.

It was none other than Suan who, a month later, scored the equalizer for the Israeli national team in the 90th minute of the match against the Irish national team in the World Cup qualifiers. Yet, rather than attacking the Beitar Jerusalem fans who had humiliated him just a month before, and instead of ranting or using harsh language, Suan kept his calm and chose to speak about coexistence and moderation, attempting to bridge the gaps and hatred.

Suan has worked for years on behalf of the New Israel Fund and acted against violence and racism in the soccer fields. He is a member of the Peres Center for Peace and played as captain of the national peace team in a match against Real Madrid.

Suan even considered playing with Beitar Jerusalem. In an interview he gave a short while before his retirement, he told Haaretz, “I fought to play on Beitar to reduce hatred between Jews and Arabs. The contract was finalized. … I knew some Arabs would call me a traitor and Beitar fans wouldn't cheer for me, and might even try to kill me, but I did it to bring folks together. But in the end, the people at Beitar weren't brave enough. The fans run things … and everyone is afraid of them.”

If there is one place where Jews and Arabs can be brought together, it is in the sports arena. It is rather doubtful whether Regev is capable of suspending the Bnei Sakhnin team just because its fans waved Palestinian flags. Still, she did manage to unnecessarily escalate the tensions in the soccer stadiums and further undermine the rickety bridge that connects Jews and Arabs in the state of Israel.