Some athletes in the Middle East and North Africa face domestic pressures to refuse to face Israelis in competition. 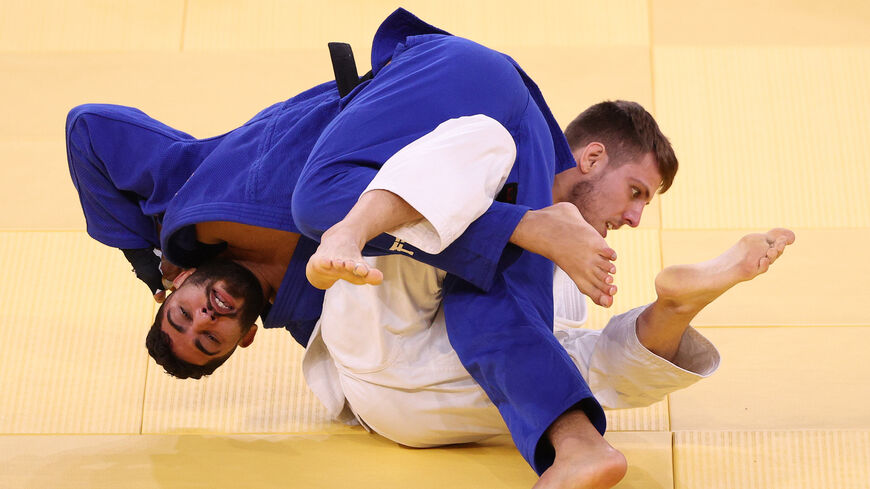 Tohar Butbul of Israel and Arthur Margelidon of Canada compete during a men’s judo repechage match at the Tokyo 2020 Olympic Games at Nippon Budokan on July 26, 2021, in Tokyo. - Harry How/Getty Images

A Sudanese judoka pulled out of his match against an Israeli opponent at the Olympics on Monday. It was the second time a martial artist refused to fight an Israeli at the marquee sports competition.

Mohamed Abdalrasool was scheduled to face Israeli Tohar Butbul in the 73-kilogram (160-pound) men’s division in Tokyo, according to the official draw. However, Abdalrasool failed to show up for their match Monday, despite previously weighing in, The Associated Press reported.

It was the second fight in a row Butbul won by default due to the withdrawal of his opponent. Last week, Algerian judoka Fethi Nourine withdrew from the Olympics rather than face Butbul.

Butbul later competed against Moldovan Victor Sterpu on Monday and won, but then lost a quarterfinal match to South Korea's An Changrim. That knocked Butbul out of contention for a silver or gold medal. He was then eliminated from bronze medal contention by Canada’s Arthur Margelidon in what is known as a repechage match.

Some athletes from Middle Eastern and North African states refuse to compete against Israelis. Most nations in the region lack diplomatic relations with Israel.

Sudan actually agreed to normalize relations with Israel last year, though they have yet to officially establish ties. Algeria does not recognize Israel.

There is international pressure on athletes to not compete against Israelis as a result of the Israeli-Palestinian conflict. This month, a soccer match between FC Barcelona and Beitar Jerusalem was called off amid opposition from Palestinian authorities and groups that support boycotts of Israel. In this instance, the Spanish club did not want to play at Beitar’s stadium in disputed Jerusalem, leading Beitar to cancel the game.

The situation has somewhat changed with the normalization agreement between Israel and the United Arab Emirates last year. In March, the Emirati and Israeli rugby teams played each other for the first time. This constituted a shift. In 2009, the UAE barred an Israeli tennis player from entering the country for a tournament.

Judo has been particularly affected by the Israel-Palestine issue. At the 2016 Olympics, Egyptian judoka Islam El Shehaby refused to shake hands with Or Sasson after losing to the Israeli.

The refusal to compete against Israelis in sports may be influenced by domestic pressures athletes face in their home countries — as opposed to the views of the athletes themselves. In 2019, Iranian judoka Saeid Mollaei lost a match on purpose to avoid facing an Israeli in a later round of a tournament. Fearing retribution from authorities, he then claimed asylum in Germany. In February, he traveled to Israel to participate in a judo competition.

Some regional media outlets praised Abdalrasool for refusing to face Butbul. The Lebanon-based news outlet Al Mayadeen wrote, “Abdalrasool did not attend the match, rejecting normalization and achieving victory for Palestine in an honorable stance after Nourine's move a few days ago.”