Fears are growing among rights activists that the appointment of Gholam Hossein Mohseni Ejei may usher in a new reign of terror for Iran's already stifled civil society. 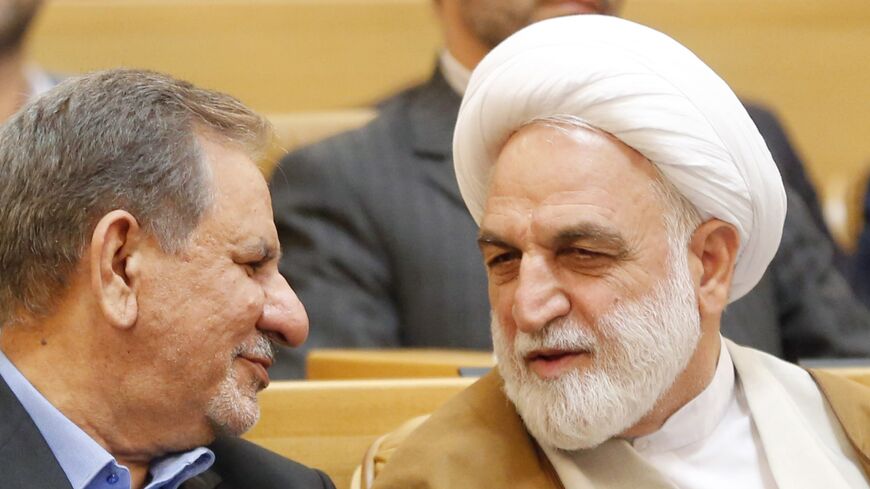 Gholam Hossein Mohseni Ejei (R), deputy of the chief justice of Iran, speaks with Iran's first vice president, Eshaq Jahangiri (L), during an annual ceremony in Tehran on March 14, 2017, in which charitable donors pay off the debts of prisoners as a show of Islamic charity. Mohseni Ejei was appointed Iran's chief justice on July 1, 2021. - ATTA KENARE/AFP via Getty Images

In his letter of credentials to the new chief justice, Khamenei advised his pick to tackle corruption, and ensure the rule of law and justice, after describing the cleric as a man with "in-depth understanding and a brilliant record."

Under Article 157 of Iran's theocratic constitution, the unelected supreme leader directly appoints the head of the judiciary, one of the three branches of power along with the executive and the parliament. As the same laws require the judiciary head to be a cleric, the post has in the past three decades been held by relentless hard-liners close to Khamenei.

Iran's judiciary has long been accused of rights violations and has represented to many Iranians an institution defined by lack of transparency and plagued by inner corruption. Mahmoud Shahroudi famously declared upon his appointment as chief justice in 1999 that he had inherited an institution that was in ruins.

What perhaps distinguishes Mohseni Ejei from his predecessors is his repeated movements between the judiciary and the intelligence apparatus. As an interrogator in the early years following Iran's 1979 revolution and later the judiciary's representative in the Intelligence Ministry, Mohseni Ejei is accused of close involvement in the mass executions of political prisoners in the 1980s as well as the so-called "chain assassination" of Iranian dissidents and intellectuals in the late 1990s.

In 2005, Mohseni Ejei was named Iran's intelligence minister, a post he maintained for four years before his promotion to prosecutor-general. His transition between the two key posts coincided with the Islamic Republic's crackdown on the 2009 postelection protests. The unrest saw hundreds killed and thousands placed behind bars, many of whom shown confessing in mass televised trials as the ruling establishment was poised to crush a fledgling Green Movement. Mohseni Ejei's role in the state-led clampdown triggered his inclusion as a rights violator in separate blacklists issued by the European Union and the US Department of Treasury.​

In 2004, the cleric became known as "the biting judge" after he expressed his intolerance of criticism by severely attacking and leaving a bite mark on the shoulder of a senior Reformist journalist during a weekly meeting.

The figure of a man known for his inflammatory speeches and overt disregard for press freedoms is already sending shivers down the spines of members of Iran's civil society, who are sharing across social media platforms their experiences with the ultraconservative judge.

"It would be a step backward," wrote rights activist and lawyer Ali Mojtahedzadeh before the official appointment as he hoped for the rumors to be untrue. "As we continue to deal with crises on a daily basis, the replacement of a bad chief justice with one who is worse is little less than a surprise," tweeted another Tehran-based lawyer.

Mohseni Ejei's appointment also marked yet another move toward a further tightening of the hard-liners' grip on power in Iran. All the three branches of the Islamic Republic establishment are now in full control of men effectively handpicked by the country's supreme leader.