The lawmakers' formal complaint was appended by a public petition that, among other allegations, accuses Rouhani of betraying Iranians through signing the nuclear deal with the world powers. 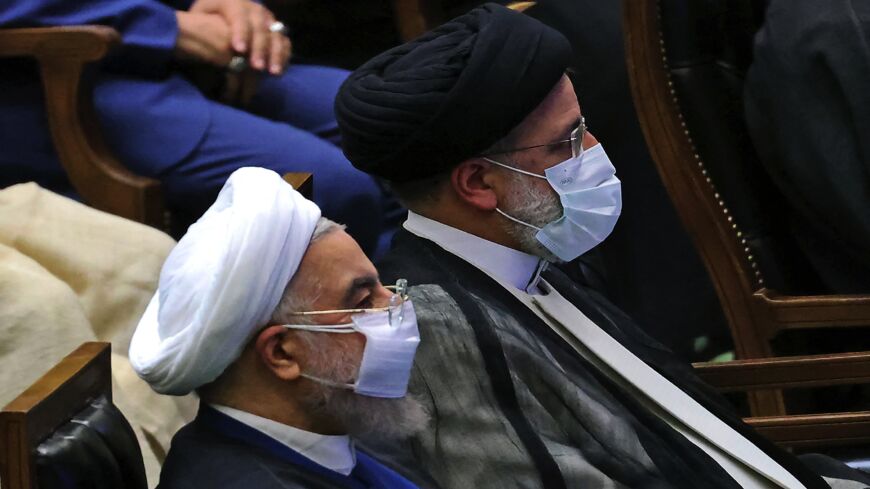 An influential committee in Iran's hard-line parliament submitted a concluded investigation and formal lawsuit to the judiciary demanding former President Hassan Rouhani be put on trial. The parliamentarians advancing the complaint argued their probe had established Rouhani's misconduct and failure to honor his presidential duties during his two consecutive terms (2013-2021).

Deputy parliament speaker Abdolreza Mesri, who presided over the Oct. 12 session, declared the lawmakers would respect any decision by the judiciary, "which is an independent entity." Iran's judiciary has traditionally been a conservative entity whose chief is directly appointed by Supreme Leader Ayatollah Ali Khamenei. The post is currently held by hard-line cleric Gholam-Hossein Mohseni Ejei.

Enclosed with the lawmakers' formal complaint was an online petition signed by over half a million "university students, young clerics and people from different walks of life." The document urges the "revolutionary parliament" to pursue the matter until a "firm judicial verdict" is issued against the former president for "devaluing Iran's national currency," "destroying jobs," and "appointing spies and dual nationals" to sensitive positions. Iran's hard-liners have repeatedly claimed the "enemy's intelligence services" infiltrated the Rouhani government's negotiating team, who signed the "humiliating" 2015 nuclear deal with the world powers.

Listing 18 counts, the petition accuses Rouhani of "deception of the public about sanctions removal" as well as "destroying Iran's nuclear technology." It further levels "treason" allegations, punishable by the death penalty under Iran's strict judicial laws.

The signees have also implicated Rouhani in the "deaths of over 200 Iranians" in the November 2019 unrest triggered by fuel price hikes. According to the petition, the increased gasoline price was a Rouhani "sedition." Iran's supreme leader publicly threw his full weight behind the controversial plan and linked the unrest to "foreign enemies" as forces loyal to him carried out the Islamic Republic's deadliest crackdown ever on public protests. Rouhani's role in crushing the unrest has already been highlighted by his predecessor, hard-line Mahmoud Ahmadinejad, who insists the moderate cleric stand trial for "paving the ground for shedding the blood of Iranians."

Rouhani bid farewell to his post on Aug. 2, handing it over to Ebrahim Raisi who won a landslide victory — albeit in a controversial election marked by the lowest turnout seen in Iran's recent history. Ever since, Rouhani has been unusually absent from public view, making his future political career anyone's guess.

It was not immediately clear if the parliamentarians' lawsuit was more symbolic in nature and how far the Khamenei-controlled judiciary will go after Rouhani. In post-revolution Iran, no former president has been seen in the dock. Yet under Khamenei's leadership, and regardless of their political leanings, they have shared the same destiny: Effectively marginalized, they have fallen from the supreme leader's grace one after another.