Iran's parliament speaker Ali Larijani had to cancel a speech scheduled to mark the upcoming 40th anniversary of the country's Islamic Revolution after hard-liners mobilized a harsh unwelcome. 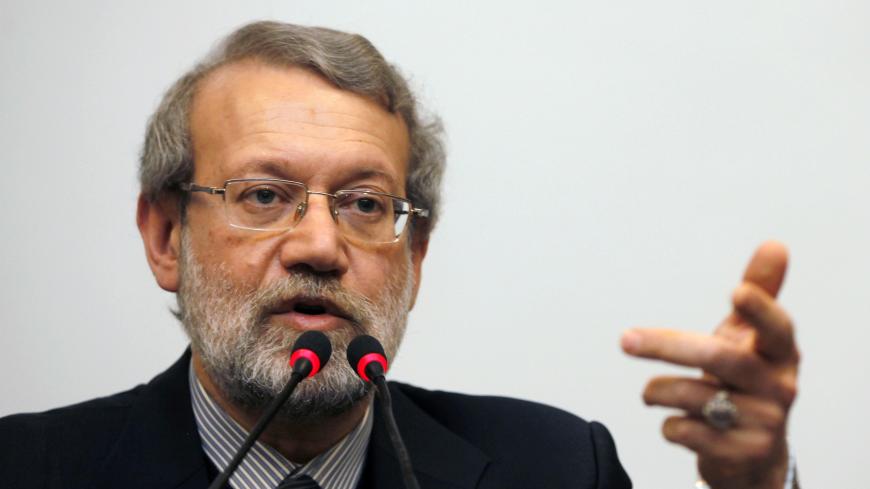 It all began with petitions signed by "the revolutionary people" of Karaj, a city west of the capital Tehran, where parliament speaker Ali Larijani was scheduled to deliver a speech on the upcoming 40th anniversary of Iran's Islamic Revolution Feb. 11. According to ultra-conservative outlet Raja News, the petitions were an expression of anger backed by the city's Friday prayer leader Seyyed Mohammad Mehdi Hosseini Hamedani, who declared it a "legitimate" protest.

The hard-line cleric openly demanded that the speech be canceled. "The ceremony is meant to commemorate the revolution. The speaker of that ceremony must be a revolutionary, too," Hamedani's website quoted him as saying.

The term "revolutionary," a recurrent motif in speeches by Iran's supreme leader, has increasingly come to reference people he and figures close to him view as committed to the basic principles of the Islamic Republic. Critics perceive it as a euphemism for someone with a hard-line mindset and zero tolerance for political differences.

The message from the Karaj Friday prayer leader was clearly received. Larijani's office announced that the trip was canceled and that the cleric could feel free to ask anyone of his choice to deliver the speech.

Larijani has been a heavyweight politician with significant leverage in Iran's key decision-making processes for years. Despite his origins in the country's conservative camp, he has made a piecemeal metamorphosis into a moderate figure. His close coordination with President Hassan Rouhani and particularly his support for the highly divisive nuclear deal enraged his former allies, exposing him to unyielding attacks.

While conservative papers largely ignored the cancelation of the speech, outlets with Reformist affiliations covered it extensively. Arman ran an interview with Gholam-Ali Rajaee, a Reformist adviser to the mayor of Tehran. Rajaee warned that if not properly addressed, similar moves could target other senior officials. The parliament speaker took "a smart tactical step," opined Aftab, another Reform-leaning daily.

The parliament speaker's decision was perhaps rooted in concern about a repeat of what happened to him during a similar event in the ultra-religious city of Qom — his own constituency — back in 2013, when he was confronted by a large and furious shoe-throwing crowd.

After the cancelation of the speech, Larijani's like-minded colleagues came out in his defense. "There are certain people in our country who insist on extremism," said Mahmoud Sadeghi, a lawmaker from Tehran known for his quick and outspoken reactions. Sadeghi also raised concern about "what the hard-liners might have in store for the country."

Deputy parliament speaker Ali Motahari, who is also Larijani's brother-in-law, urged the Iranian judiciary to intervene, while another deputy speaker, Masoud Pezeshkian found the matter serious enough to be addressed by the supreme leader.

The "revolutionary people" who blocked Larijani's speech have not offered an explanation as to why he was so unwelcome. But speculation has been rife that Larijani is aspiring to become Iran's next president. The speech, therefore, might have been viewed by powerful hard-liners as a prelude to the 2021 campaign.

In the "bumpy road ahead," as an Iranian economic analyst has put it, Larijani faces other, more serious accusations. There are unofficial reports that ultra-conservative cleric Ayatollah Mohammd Yazdi, a member of the Assembly of Experts, told a meeting of the powerful clerical body that Larijani had sat down with the UK Ambassador to Tehran, Rob Macaire. According to Yazdi's account, the British diplomat offered Larijani a deal: The UK government will support Larijani in the 2021 presidential polls in exchange for the parliament speaker's help with the ratification of a controversial bill against the funding of terrorism, a precondition for Iran to be removed from the blacklist of the Financial Action Task Force.

The British envoy expressed surprise at the claim and denied even having met with Larijani, let alone engaging in such a discussion with him. "I certainly would not be 'pledging help' for anyone in Iran’s next elections, since we do not interfere in Iran’s internal politics."

Larijani is not the lone target of the hard-liners' campaign to keep moderate figures away from podiums. "Now that the public demand for the cancelation of Larijani's speech has worked, let’s just take another resolute step forward by doing the same to Rouhani's speech as well," tweeted a man introducing himself as a staunch supporter of the supreme leader. He was referring to a key speech addressing the Tehran rallies for the Islamic Revolution's anniversary, traditionally delivered by the country's sitting president. Days ahead of the annual address, pressure is already mounting and calls are getting loud under the hashtag "No to Rouhani's Speech."