Iran's parliament speaker said he is not running in February's parliamentary elections and also does not plan to run for president in 2021; these statements brought jubilation to the camp of his hard-line rivals and triggered debate as to what his next steps might be. 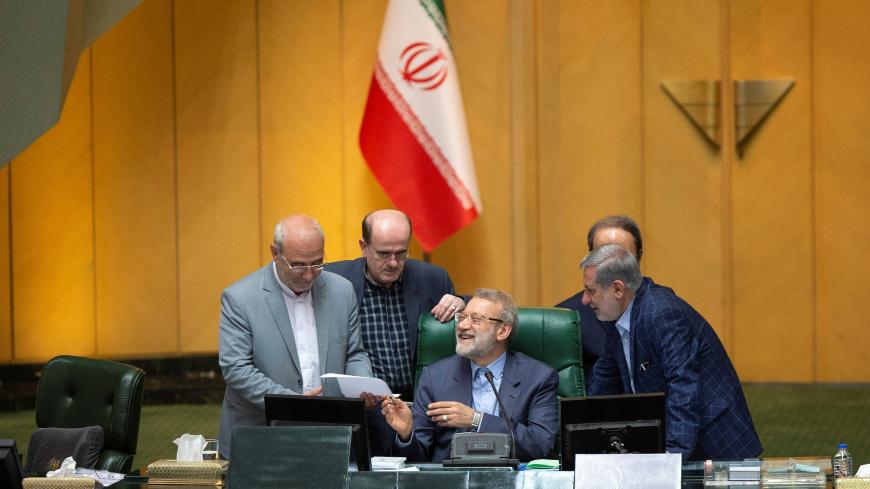 For weeks, speculation had been rife that Iranian parliament Speaker Ali Larijani was deliberating whether to run for reelection, and on Nov. 30, he officially declared that he will not participate in the Feb. 21 parliamentary vote.

Larijani has been speaker for 11 years, and his decision strengthened theories that he was setting his sights on becoming Iran's next president. It took him less than a day, however, to say, "Let me make it clear, I have no plan for the 2021 presidential election."

The second, straightforward announcement from a man known for his diplomatic and ambiguous language left many unconvinced. While Larijani might be serious about his plan to bid farewell to parliament, it was argued, the presidency was still an option; indeed, he ran for the post in 2005, although without success. "He is not one of those politicians who would show their cards as early as now," the pro-Reform Shargh daily observed.

Larijani has been well inside Iran's top decision-making circles and at the upper echelons for over three decades, serving as the secretary of the Supreme National Security Council and the chief nuclear negotiator (2005-2007) at the height of a standoff between Iran and the West over the latter's controversial nuclear program.

Though originally hailing from the conservative camp, the 62-year-old speaker has in recent years come to be known as a moderate figure. With Hassan Rouhani taking office as president in 2013, the fault lines between Larijani and hard-liners began to be publicly exposed as he demonstrated utmost affinity with the Reformist-backed president. Those who once prided themselves in throwing their full weight behind Larijani were seen throwing shoes at him, disrupting his speeches in the city of Qom, his clergy-base constituency.

"His decision not to run is a divine blessing for the revolutionary camp," said Bijan Nobaveh, a former conservative lawmaker. "His absence will usher in an efficient parliament," he added, accusing Larijani of driving a wedge among members of the conservative camp.

Larijani's divorce from his former supporters became more evident in October 2015. While being overwhelmingly controlled by hard-liners, parliament passed the bill on the contentious and divisive Iran nuclear deal, which those lawmakers had vigorously opposed as being a series of humiliating concessions to the West. The hard-liner camp accused Larijani of abusing his power and influencing fellow parliamentarians by forcing the bill's ratification in a historic session as brief as 20 minutes.

Ever since, the ultra-conservatives' resentment of the eloquent speaker has not subsided. Only a few weeks before he announced his departure, an alliance of conservative politicians in his constituency removed Larijani from their list of proposed candidates for the upcoming parliament. "Twelve years is a long period. … And for the power structure to remain dynamic and democratic, circulation of political forces is a necessity," said Mohsen Pirhadi, who serves as the spokesman for the alliance. The removal, some hard-liners argue, sent a clear message to Larijani, making him rethink his plans and decide on the farewell after he saw his chances of a victory fast diminishing.

On the other hand, to some leading Reformist figures, Larijani has never been a family member, and only a pragmatic politician at best. Thus, facing opposition from both ends of the spectrum, Larijani is seen as unlikely to win the presidential race should the existing political calculus persist.

Nevertheless, given the unpredictable nature and endgame surprises characterizing Iranian power plays, Larijani's departure from parliament is not yet an absolute. There are reports that several Qom-based senior Shiite clerics have urged Larijani to have a change of heart and run for parliament again. That has already triggered worries among Larijani's toughest opponents, who had been dreaming about seeing his back. Javad Karimi Ghodousi, a hard-line lawmaker whose allegations of espionage against rivals have not even spared Rouhani, exhibited such concern in a chain of tweets. Ghodousi warned Larijani not to exploit the clerical community's influence for his personal gains.

In addition fo facing such partisan attacks, Larijani has recently come under fire for circumventing parliamentarians in the case of the controversial gasoline price scheme introduced by the Rouhani government; the decision to reduce fuel subsidies threw the country into days of disarray and deadly protests unseen in Iran's contemporary history. Larijani is criticized for not engaging fellow lawmakers in the approval of the plan. He is one of the three members of the temporary and newly introduced Supreme Council for Economic Coordination set up by the supreme leader and tasked with important decisions against what the Islamic Republic calls the US economic war.

The gasoline scheme, which went through the council, underscored the lack of parliament's power. Outspoken Reformist lawmaker Parvaneh Salahshouri, in the immediate outbreak of the protests and the harsh government crackdown, lamented, "My dear people, it's been a long time since the helm stopped being taken by parliament. We used to have this remaining and fragile pillar of democracy, which is gone for good now."

The government's iron-fist clampdown on disillusioned Iranians carrying economic grievances came only a few months into the parliamentary elections. It is, therefore, expected to widen the nation-state rift and add to the ruling elites' trust deficit. Ordinary Iranians' collective estrangement from the establishment has already prompted a boycott even from those who are known for relentlessly encouraging the public into political participation, further raising the possibility that the upcoming polls will be marred by low turnout,unless the state sorts out some workable national reconciliation.

Poor public participation in past Iranian elections has traditionally facilitated landslide wins for hard-liners. The bitter experience coupled with Larijani's departure is already fueling fears among moderate forces that the next Iranian parliament will be taken over by the uncompromising segments of the conservative camp, who are lurking for a Rouhani impeachment and counting the days to "topple" him before the official closure of his presidency.