Prime Minister Naftali Bennett is reviewing Israel’s policy on Iran in order to find the best strategy adapted to the developing situation in the region and worldwide. 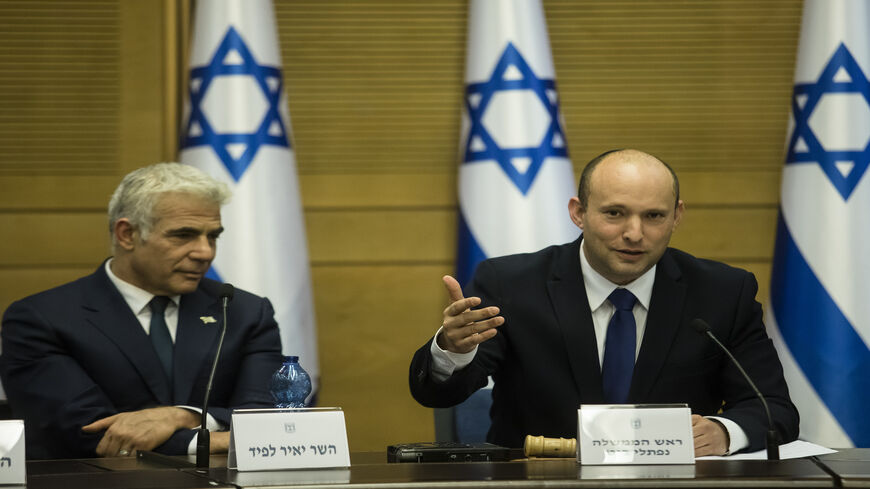 I have a firm opinion on the Iranian issue, I am well versed in the subject matter, and I also want to hear your opinion, especially if it differs from mine. That is what Israeli Prime Minister Naftali Bennett has been telling his interlocutors in recent weeks. Bennett emphasized he would like to hear everything, from the beginning, asking his interlocutors not to hold back. The new prime minister insisted he wants to dismantle and put together this Iran policy landmine — to conduct an in-depth seminar on the issue in order to think outside the box and formulate a coherent policy vis-à-vis the US administration.

This is the thrust of what Bennett has been telling the heads of Israel’s security agencies, government officials, and serving and former diplomats. He has been repeating his message in private meetings and in larger forums. This seminar, as he calls it, is designed to put together a coherent Israeli policy ahead of his critical Washington meetings with President Joe Biden and his team. The meetings, according to Bennett’s people, will likely take place only in August because Bennett wants to wait until Iran’s newly elected President Ebrahim Raisi assumes office. Bennett believes it will be easier to convey Israel’s agonizing concerns over the nuclear deal with Iran once Raisi, whom Bennett dubs the “hangman from Tehran,” is installed in the presidential palace.

Bennett’s policy marathon is fascinating. He meets with all the heads of all the agencies, with all forums possible, as well as with a large number of former office holders. He is willing to hear every opinion as he conducts this policy review without prejudice. He prides himself on being a clean slate as he faces a complex dilemma. As reported here previously, Bennett holds particularly hawkish and aggressive views on the Iran issue. He has previously said Israel should openly attack Iranian targets in retaliation for every blow directed at Israel by Iranian proxies, such as Hezbollah. Judging by past statements, had Bennett been a member of the “group of seven” — the unofficial ministerial forum on national security advising his predecessor, former Prime Minister Benjamin Netanyahu — he would most probably have supported a military strike on Iran’s nuclear infrastructure.

However, as the Israeli cliche aptly describes it, the view from the prime minister’s office is different than the view from outside. Almost all of Israel’s prime ministers changed their positions once they moved into the hot seat where decisions are made on running of one of the world’s most complex and dangerous countries. Prime Minister Yitzhak Rabin, a former general, forged the historic 1993 Oslo Accord with Israel’s bitterest enemy — the PLO. In 1979, Prime Minister Menachem Begin, an ideological hard-liner, signed Israel’s first treaty with an Arab nation — Egypt — and handed back all of the Sinai Peninsula that Israel had captured in 1967. Defense hawk and pro-settlement Premier Ariel Sharon dismantled the Jewish settlements in the Gaza Strip and handed the territory — also captured in 1967 — to the Palestinians in 2005. And Netanyahu delivered his landmark Bar-Ilan speech the year he took office, in 2009, expressing support for the two-state solution, and signed an agreement handing the West Bank town of Hebron back to the Palestinians. Even Prime Minister Yitzhak Shamir, a die-hard right-wing ideologue, agreed to have his arm twisted and attended the 1991 Madrid peace summit.

Bennett does not necessarily intend to change his original views, but he will have to pit them against reality and decide on a winning formula, or at least on the least harmful one. His choices are stark. Some of Israel’s intelligence agencies believe maintaining the status quo is Israel’s most dangerous option. Given the stalemate in US-Iran negotiations and Iranian progress on its nuclear program development, Israel finds itself in a difficult spot. Is a return to the original 2015 agreement between Iran and world powers better for Israel or worse? What price would Israel pay for yet another public clash with the US administration on Iran echoing the Netanyahu government’s clash with the Obama administration? Could Israel withstand the cost, and do the risks of such a course outweigh its benefits?

Bennett’s goal, as he has been explaining at these sessions, is not to change Israeli policy on Iran, but to review current policy in light of changes on the ground. Much has changed, he says. His associates explain his view: There is a new US administration, its negotiations with Iran are stuck, Iran is accelerating its nuclear program and Israel is run by a new government. Renewed thinking and preparation for every eventuality are a must. Israel must choose its best course not in terms of its ideology, but in terms of the desired result.

Several particularly sensitive points have arisen in these deliberations. For example, is Israel even able to influence US policy on Iran’s nuclear program, even if it is given all the time in the world to lay out its views and intelligence in Washington? Is an independent Israeli military option vis-a-vis the Iranian nuclear program still feasible? Can the United States and Israel agree on a joint action plan in case Iran violates the terms of its renewed nuclear agreement with world powers?

Bennett means to arrive in Washington with a clear, cohesive policy on this issue and not leave anything to chance. He will present the Americans with a series of realistic scenarios and responses to each one. Prior to his departure, he will hold a methodical discussion with his foreign policy and security Cabinet in a bid to mobilize as much support as possible from his government coalition partners for the revamped approach. He is working closely on the issue with Foreign Minister Yair Lapid and Defense Minister Benny Gantz, who hold similar views on Israeli policy vis-a-vis the United States. Lapid and Gantz believe Israel must avoid, at all cost, the mistakes made at the time by Netanyahu by entering into a public clash with the Americans on the Iran nuclear issue.

They both agree that while Israel can express criticism of a return to the deal and even strong opposition, a frontal campaign against Biden would be a fatal error. Even in the worst-case scenario of a return to the exact same agreement that President Barack Obama signed with Iran, Israel would be better off trying to reach a separate agreement with the administration compensating it and laying out future courses of action than engineering a head-on collision. That is what Israel’s minister of defense and foreign affairs believe.

This places the position of military chief Lt. Gen. Aviv Kochavi in a particularly interesting light. Kochavi generated a storm earlier this year when he voiced a harsh warning against a return to the nuclear deal with Iran. The Netanyahu government extended Kochavi’s three-year term to a fourth year, but Netanyahu is no longer at the helm. Will his departure affect the position of Israel’s top soldier? We may not know until August rolls around.