Yusuf Albaz allegedly called for police to be killed during May's unrest in the city of Lod. 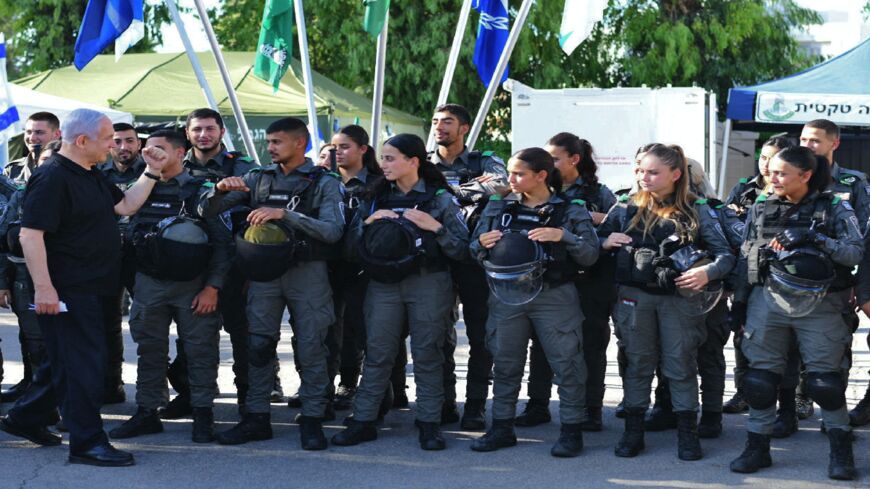 Israeli Prime Minister Benjamin Netanyahu meets with members of the Israeli border police in the central city of Lod, near Tel Aviv, on May 13, 2021, a day after Israeli far-right groups clashed with security forces and Arab Israelis. - YUVAL CHEN/POOL/AFP via Getty Images

An Israeli imam was arraigned in court today in relation to communal violence between Jews and Arabs earlier this year. Some rights groups accuse Israeli authorities of disproportionately going after Arab citizens in relation to the violence.

Yusuf Albaz, from the central city of Lod, was charged on Thursday with inciting violence against police and issuing threats against Lod’s deputy mayor, Yossi Harush.

Lod was the center of much of the unprecedented communal violence between Jewish and Arab Israelis in May. The attacks followed similar tensions in Jerusalem and coincided with the war between Israel and Hamas.

The charges are based on Albaz’s Facebook posts during the unrest. He allegedly shared a movie clip showing police being killed and wrote “The best way to deal with injustice,” among other transgressions, according to The Times of Israel. Al-Monitor could not find the post, and it may have been deleted.

Albaz posts regularly on his Facebook page and did so during the conflict in the spring. On May 12, Albaz criticized Lod Mayor Yair Revivo for touring Lod with the right-wing nationalist politician Itamar Ben Gvir days before the riots. The tour angered Arab residents, as Ben Gvir has been widely accused of racism against Arabs. Albaz also accused Revivo of “urging police to enter mosques and prevent the call to prayer from therein” in the post and blamed the unrest on these incidents.

“Then it becomes very clear to you the reason for the deterioration that happened in the city,” wrote Albaz in Arabic, using duplicate letters to emphasize the word “clear."

Albaz is a prominent figure in the Islamic Movement in Israel. He was first arrested on June 17, according to the Arabic-language Israeli website arab48. The outlet also referenced the allegation that the imam called for the killing of police officers.

Israeli police arrested 1,892 people in connection to protests, riots and other forms of violence that took place in May. Of those who were arrested, 183 are Jewish and the rest are Arab, according to the Israeli outlet Haaretz. Arab Israelis sometimes identify as Palestinian citizens of Israel.

Some Israeli Arab rights groups have accused the authorities of disproportionately targeting Arab citizens in a “mass arrest campaign” in relation to May’s violence. The Haifa-based Mossawa Center said that many of those arrested had not participated in any protests. Adalah, another rights group in Haifa, wrote a letter to Israeli officials accusing them of “collective punishment based on racial profiling.”