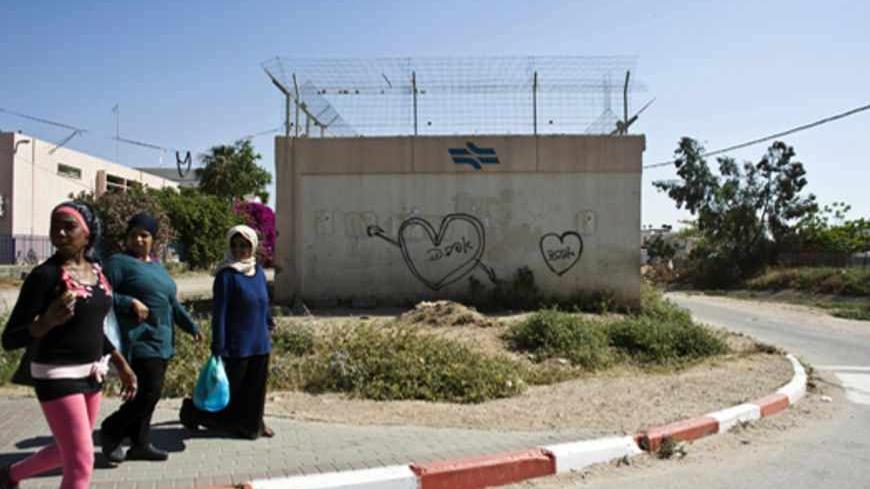 Women walk past a Hebrew graffiti that reads "Love" in the Rakevet neighborhood in Lod, May 15, 2012. The backstreets of Lod, a mixed Arab-Jewish city just 20 minutes from the tree-lined boulevards of Tel Aviv, reveal a seamy underside of Israel that few visitors get to see, tucked away behind Ben Gurion airport off the main highway to Jerusalem and the occupied West Bank. - REUTERS/Nir Elias

Lod is just 20 minutes from Tel Aviv. There is no other city in Israel that has gone through such turbulent political upheavals as Lod. Two years ago, Meir Nitzan, who had served as mayor of Rishon LeZion for more than 30 years, was called to the rescue and asked to run the city. He was preceded by a retired Israel Defense Forces officer, reserve Brig. Gen. Ilan Harari, and a retired police officer, Aryeh Bibi, who, each in turn, had also been called on similar rescue missions. The fact that the three were appointed to the mayor’s office without standing for election or applying for the job established the image of Lod as a city that is incapable of managing its own affairs and that is still not mature enough for democratic elections. “Running this city is an impossible mission,” I was told by Bibi, who had served as commissioner of the prison service before being called on to head the Lod City Council. His colleague Harari, addressing the Knesset, described the task as “the greatest municipal challenge in the country.”

Given the central location of Lod in Israel, all government ministries have pitched in to help the city and get it out of trouble. Prime ministers visited the city one after the other, lavishing promises aplenty. Alas, to no avail. In the absence of vital infrastructures, any of the residents who could afford it have fled the city.

“It is all going to change,” promised Aaron Attias — who leads the religious community in the city — as we were sitting in his bureau, encircled by photos of new buildings that adorn the office walls. “In 10 years, you will not recognize Lod,” he added. Attias was born in the city, and he is the only one of his six brothers and all his classmates who stayed behind. “They all left because they wanted to get ahead in life. In a certain sense, the residents of Lod have the feeling that they live in the most remote of development towns. We live in the center of the country; yet, we are the furthest removed from Israeli society.”

Like many of the Jewish residents, Attias attributes the decline of the city to the influx of “undesirable” Arabs, as he calls them. He targets his criticism at collaborators, Bedouins and criminal elements who established a foothold in the city, propagating poverty and violence. “I was asking myself what could be done in face of the situation,” he went on to tell me. “Should we cave in and give up on the city or rather brace up and fight for it? I realized that I could rely on the religious public alone, as we, the religious, are motivated by codes of mission ethics. We go where we are needed.”

To illustrate the root causes of the problems weighing on the city, Attias offered to show me around the poorer and tougher neighborhoods of Lod. Riding in his car, he led me into Lod’s “Rakevet” [railway] neighborhood, notorious across the country as the most violent and dangerous neighborhood. In fact, no other locality in Israel arouses as much fear and dread as this rough neighborhood. It was originally set up in the days of the British Mandate as a luxurious residential quarter for the British railway workers. However, over the years it has deteriorated into a wild mass of sands, swamps and garbage dumps.

Although intensive rehabilitation works have been carried out in the area, the neighborhood is still in a miserable state, and it is hard to believe that in 21st century Israel, adults as well as children are living in such poor conditions. Due to the rising violence, most of the houses in the neighborhood are surrounded by barbed-wire fences and sophisticated cameras, tracking any suspicious movement. The houses and courtyards are closed to the outside to guard the privacy of the inhabitants. Children who are not attending any educational institution are running aimlessly around the alleys. Of the 17,000 children in the city, 5,000 have been identified as children at personal risk. They are for the most part Arabs.

Despite the campaign Attias is waging against the Arab population over the future of the city, he is convinced that their plight and poverty are a direct result of deprivation and discrimination. He admits that had Jewish children been involved, the government would have promptly intervened to solve the problem and the situation would have changed then and there.

“I can argue with them and struggle against them,” Attias added. “However, the Arabs know that I want to live in peace side by side with them. As a matter of fact, it is the secular leftists — who have come to Lod to change it — who are seen by the Arabs as alien outsiders.”

Attias believes that the Arab residents of Lod are presently at a crossroads: Many of them wish to integrate into Israeli society and share both rights and duties with the Jewish population. Others aspire to foster their religious identity as Muslims and keep apart from the state of Israel and its Jewish citizens.

I asked Attias which of the two trends would prevail, in his opinion. His answer surprised me. “We will join forces with those Arabs who seek integration and fight the extremists, and ultimately, we will win,” he firmly stated.

Faten al-Zinati shares the same impression. She, too, believes that the Arab population in the city is undergoing radical changes. She is in her forties and wears a black headscarf. She is one of the dominant activists taking part in the efforts to bring about rapprochement between Jews and Arabs in the city. Her openness, her ready smile, her friendly manner and her fluent Hebrew have earned her popularity in the city. In addition to managing the local community center, she coordinates the “City without Violence” program, which is designed to minimize crime. “I want to save my city,” she told me when I called upon her at her office, “and I am working together with Jews, as I feel that we are all one big family.” A number of Jewish youths wearing skullcaps happened to be there when I visited her office. They came to help local teenagers about to enlist in the army. They were sitting in front of her, as pupils facing their teacher, waiting for her instructions.

“This atmosphere [of cooperation] is something new here, unseen in recent years,” Faten explained. “Now, everyone wants to lend a hand to forestall the collapse of Lod. The mayor is regularly calling us and asks how we are doing. Everybody is showing interest. We are getting phone calls from school administrators, from the secular activists, as well as the religious ones, and from the new student village. It is the first time in my life here, in Lod, that I am optimistic; it is the first time that I can hope to see my children living in a normal city.”

It turns out that the relentless quest for normalcy is a common goal of all the parties concerned in the city. If they manage to accomplish it, Lod may yet overcome the sense of desperation that has been haunting it for decades and become like any other city thriving and prospering in central Israel.