Tensions are rising in the ethnically mixed Israeli city of Lod between progressive and religiously motivated Israeli activists over the city's demographic future. 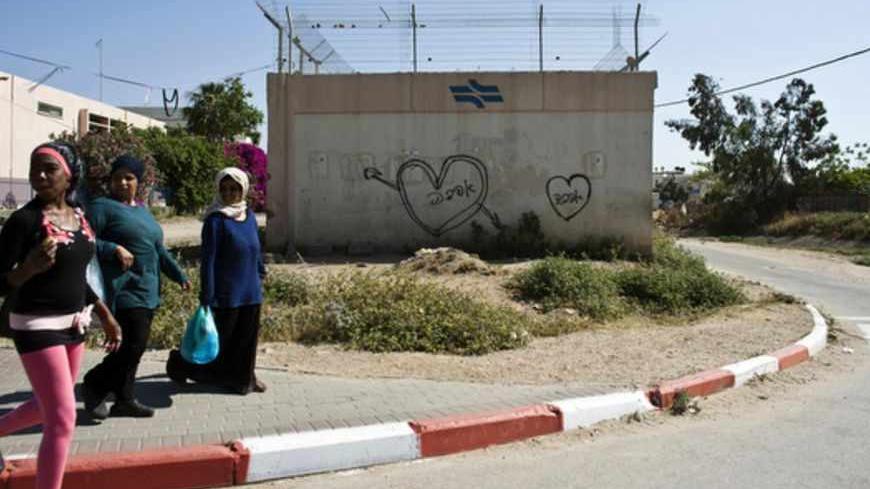 LOD, Israel — In the summer of 2011, at the height of the social-justice protest that shook Israeli society, Avital Blonder sent a personal email to hundreds of her friends. At the time, she wondered how she could contribute her share toward correcting the social wrongs that inspired hundreds of thousands of young people to take to the streets in protest.

Avital, a university graduate in her 30s from a well-heeled family, was looking for different path from the demonstrations and the tent pitching on Rothschild Boulevard in Tel Aviv. An article recounting the endless woes of Lod had caught her eye and gave her an idea. She would go there, she thought, on the social mission she was so desperately looking for.

“Until a few days ago,” she wrote to her friends, “the city of Lod meant nothing to me. For all I knew, it was a forsaken place in which I had no interest. However, I have found that it has tremendous potential to become a symbol of multiculturalism and coexistence. More than 20,000 people living in Lod are still not connected to the sewage system, and to have a shower, they must drag buckets with water they fill elsewhere. The illiteracy rate in the city is one of the highest in the country. There are in Lod neighborhoods without any social services, and in many of them, gangs rule the streets.”

Avital proposed to those young activists, the advocates of social justice who had paralyzed the center of Tel Aviv, to join her and move to Lod to revolutionize the city.

“I have no doubt that if we invest in the human capital in the city,” she wrote, “we can bring about a major social change, the like of which has seldom, if ever, been seen in Israel.”

One of the young activists who moved with her to Lod is Itzik Shmuli, one of the leaders of the protest movement and currently a Knesset Member with the Labor Party.

“In Lod, I run into all of Israel's social plights in my own building's staircase,” Shmuli said in an interview published on May 10 on this site.

Now, a year and a half following her appeal, I was walking with Avital through the streets of Lod. Some residents said hello to her, while others even kissed her on the cheek. Evidently, they see in her a lifeline thrown to them. She could barely hide her pride. It appears that her call has stirred many to action. Within a few weeks, hundreds of young people had moved to Lod and set up a new social community whose spirit of enthusiasm calls to mind the early days of the kibbutzim, the pioneering collective communities in Israel. They are all imbued with a sense of mission, feeling like saviors called to rescue the city before it was too late.

And they have not gone there merely to clean the city of the corruption and dereliction that plague it. In fact, they moved there with the intention of bringing closer the Arab residents of the city and instilling in them the feeling that they are an integral part of the city. For years, Lod was notorious for the inequality between Jews and Arabs, and it seemed as if the State of Israel lost any interest in improving the situation. What’s more, thousands of religious young people had flocked to the city over time with the professed purpose of shoring up the Jewish community in the city.

“I thought at first that only a few dozen religious families would come here,” recalls Aaron Attias, the man who encouraged and orchestrated the influx of groups of religious youths into Lod. “However, once I began advertising the issue in synagogues and rabbinical colleges, and as it received more publicity, thousands have registered. They asked me: ‘What do you expect us to do?’ And I told them: ‘I want to change the city of Lod.’ It is a huge operation, saving the city. We are taking over Arab neighborhoods and urge the Arabs to sell. I am not hiding it; our goal is to transform Lod into a Jewish city.”

Lod has about 70,000 inhabitants. A third of them are Arabs, another third new immigrants and the rest veteran residents who are clearly frustrated with the situation in the city and are leaving it in droves for the new settlements set up in the environs of Lod. The deserting Jewish residents attribute the gloomy situation of the city to the local Arab population, the violence in the streets, the drug epidemic and the corruption in the city hall.

In recent years, Lod has come to be known as a free-trade zone for drugs. Drug deals are made there in the open, with no one to stop them. Unfortunately, the Arab inhabitants of the city are, predominantly, of the lowest socioeconomic stratum. Most of them are still packed in three shantytown neighborhoods, whose dismal sight is reminiscent of Kolkata. Some of them have managed to move up the ladder to Israeli-style success, and having acquired higher education and lucrative professions, moved to Jewish neighborhoods, seeking to integrate into a better social environment.

Alas, they are unwelcome there. The appearance of Arabs on the scene has deeply upset the Jewish residents. And while the first sought to blend in, the later influx has strived to break off contact. Once Arab residents moved in, the local Jewish inhabitants hurried to leave. The few Jewish residents left behind in the dilapidated mixed blocks have hung for-sale or for-rent signs on their balconies and eagerly await buyers to save them.

In an attempt to attract Israelis who are higher up the socioeconomic ladder, well-manicured neighborhoods of “self-build” individual houses have been established in recent years in Lod, as well as stylish high-rise buildings. At the same time, nothing has been built for the Arab population, as if it did not exist. In their plight, the Arab residents have invested vast resources in building a large mosque, to meet the growing needs created by the increasingly popular return to religion.

“It is our miserable lives and our poverty that have triggered this trend,” explained an Arab resident who frequents the mosque several times a day. “I am confident that with the help of Allah alone, we will solve the problems that beset our youth in Lod.”

Be that as it may, an open rivalry has emerged between the two main groups of Jewish settlers in Lod, and may shape the character of the city in the next years. While the religious community seeks to gain a foothold and expand the Jewish control over the city, the secular community is acting to reinforce multicultural and pluralistic values among the various population groups.

“If Lod falls into the hands of the religious,” Blonder argues, “it will deliver a message of bigotry and unravel the fabric of life in the mixed city, where Jews and Arabs have been living side by side.”

Aaron Attias is of a different opinion, saying, “If we fail to block the Arab expansion in the city, the State of Israel will lose a strategic outpost located in the center of the country. I am sure that in a few years, Lod will become a definitely Jewish city, unquestionably so.”

Elections for the office of mayor and seats in the city council are to be held in Lod in about six months. Their outcome may determine which of the two groups will lead Lod in the years to come.