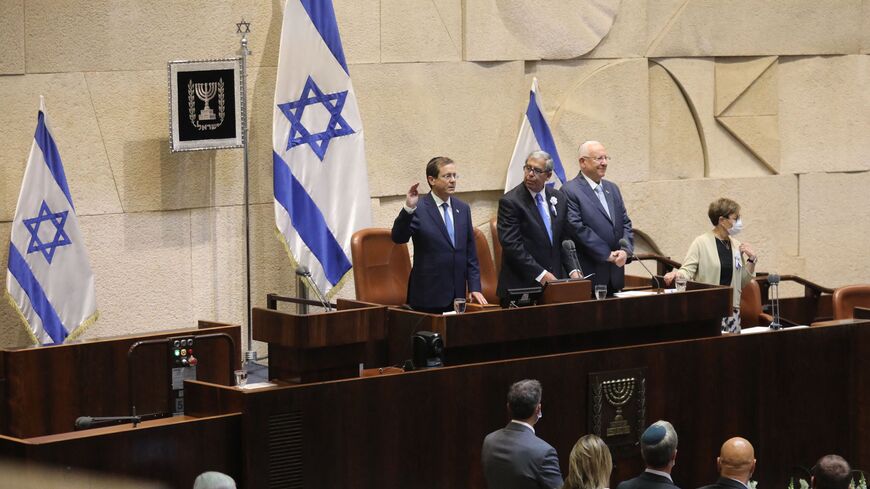 Isaac Herzog was formally sworn in today as the 11th president of Israel, replacing Reuven Rivlin. The ceremony took place at the Knesset, where Herzog took the oath over same Bible as his father, Chaim Herzog, who served as the country’s sixth president.

In his acceptance speech, Herzog vowed to be president for everyone. He said that with growing divides in society, the citizens of Israel clearly expect their leadership to change the tone, to lower the flames and calm things down. "I will set out … every morning to be the president for all. In normal times, this is a mission that sounds almost naive. But these days are, unfortunately, are not normal. Baseless hatred, the same factionalism and polarization are exacting a heavy price — today and every day. The heaviest price of all is the erosion of our national resilience."

Herzog noted that the last two and a half years, with four stormy elections, have left Israel in an unprecedented political crisis of the kind that "as the history of modern times teaches us, has managed in the past to destroy nations that were much more ancient and established than the young State of Israel, which is only 73 years old," he said.

Describing what he sees as his central task as president, Herzog said, "From here I will go to the residence of the presidents of Israel, and from there to a journey between the lines of the rift and the fracture of Israeli society. A journey that aims to find what unifies within the differences, what brings together among the rifts, a journey designed to rediscover us. I will go this way to meet the pain, to face it, tilt ear and heart to the difficulty and apprehension, even on the most explosive points.’’

Ahead of the ceremony, Rivlin tweeted a note to his successor, stating in Hebrew, "The truth is that I am a little envious of you. In a short while you will discover what a great and wonderful privilege you have to be president of all of Israel's various communities — Jews and Arabs, religious and secular, young and old."

In his farewell speech at the Knesset, Rivlin stated, "For me, the State of Israel will never be something I take for granted."

Herzog is also the grandson of late Rabbi Isaac Halevy Herzog, who served as the country’s chief Ashkenazi rabbi. A lawyer by training, he served in a variety of political positions, including as minister and as head of Israeli Labor. Before his election to president, he chaired the Jewish Agency.