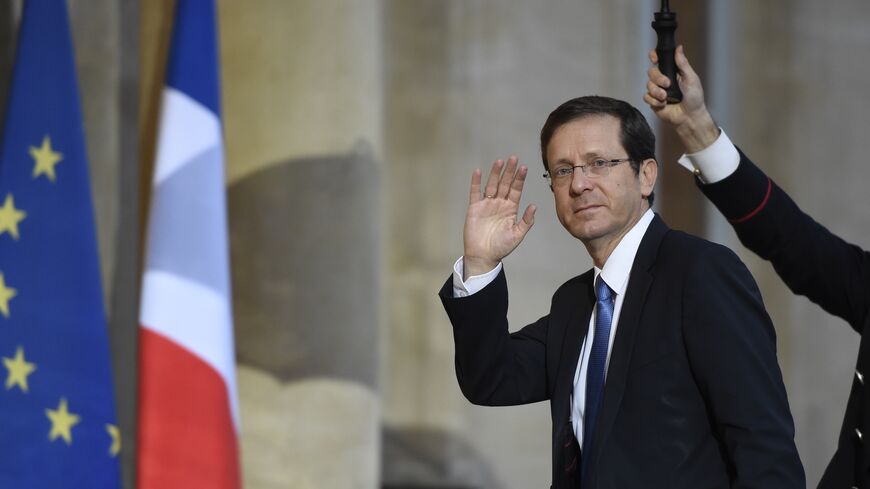 Israeli Labor Party leader Isaac Herzog waves as he arrives at the Elysee Palace for a meeting with French president on Jan. 22, 2016, in Paris. - ERIC FEFERBERG/AFP via Getty Images

At the height of one of the most tense and uncertain days in the history of Israel’s Knesset, Isaac Herzog was chosen yesterday as the 11th president of the State of Israel. He will take office July 9 and serve in this role for the next seven years.

Herzog, former chairman of the Labor Party, was elected in a secret ballot of 120 Knesset members. He received a large and diverse majority of 87 votes from both the left and the right, including the ultra-Orthodox and Arab parties.

Herzog is hugely popular, viewed as a balanced, impartial and constructive figure who managed to bridge the deep divide that separates Israeli society and its political system — at least for several hours.

The election of the president was held as everyone’s eyes were fixed on the advanced coalition negotiations taking place within the change bloc, heightening the sense that a historic change was taking shape.

Herzog was elected only hours before the expiration of the mandate for assembling a government, held by Yesh Atid chair Yair Lapid. No one knew at that point how things would turn out for the coalition talks. Would Lapid inform President Reuven Rivlin that he had succeeded in cobbling together a government, or would Netanyahu’s regime once again survive? It was close to midnight when Lapid called Rivlin with the news. Looking back, many people may view Herzog’s election as a harbinger of change.

Herzog won with a large majority, but even he seemed to be surprised by the scope of the results. Earlier that morning, analysts were still debating whether Herzog would defeat the other candidate, Miriam Peretz.

Peretz, a religious woman identified with the ideological right, is a daughter of immigrants who lost her two sons during their army service. After her tragic loss, Peretz became a symbol for love of the homeland, the “queen of hearts,” a woman with tremendous influence who has worked to bring people together. Some of her backers said that her election would be a foundational event for “the second Israel” and symbolize social mobility and unity — especially now.

Herzog, on the other hand, is often viewed as member of the so-called Israeli aristocracy. His grandfather, Rabbi Isaac-Halevi Herzog, was Israel's first Ashkenazi chief rabbi. His father, Chaim Herzog, served as Israel’s ambassador to the United Nations and was later appointed Israel’s sixth president.

It is interesting to note that Prime Minister Benjamin Netanyahu did not choose his own candidate, apparently preferring to support Herzog. It may seem not to make sense, since Herzog was viewed as the candidate of the left. However, those who understand their long relationship know that the two men appreciate and even trust each other. Netanyahu, say his associates, believes in Herzog’s fairness and decency. Yesterday, after Herzog was elected, Netanyahu hurried to to congratulate him warmly before the cameras.

The president-elect first studied law at Tel Aviv University and then international relations and English literature in Cornel University and New York University. He worked as a lawyer for a number of years. He and his wife Michal have three sons. For most of his life, Herzog has been a public figure and politically active.

Still, when Herzog was elected Labor chair, his opponents within the party said he lacked a killer instinct. In 2015, as chair of Labor and the Zionist Camp, Herzog ran against Netanyahu and lost. Yesterday, many people argued that it was a good fit for Herzog to serve as president, a position where a killer instinct is obviously not required.

After the election, Herzog said in a speech, “It is essential, really essential, to tend to the wounds that have been opened in our society recently. We must defend Israel's international standing and its good name in the family of nations, battle anti-Semitism and hatred of Israel and preserve the pillars of our democracy. We will rise to the challenge and build bridges within Israeli society and with the Jewish diaspora. This is our essence — our pioneering thrust and our obligations to this land.”

Herzog seems the right person at the right time. True, the president of Israel is a symbolic role. However, it serves as a significant platform for promoting ideas and concepts — especially regarding Israel’s political system and society, which currently is suffering deep internal rifts.

Herzog will assume his new role at a time when millions of citizens who voted for the Likud and other right-wing and ultra-Orthodox parties feel cheated by the anti-Netanyahu coalition. Should the change government be sworn in, the rifts will be sure to deepen even further.

Herzog could have a moderating effect at this confusing and difficult time. The large Knesset majority that backed him shows that he is accepted by large parts of Israel’s population and could become a force for peace in the coming years. His international standing could also contribute to Israel’s foreign relations and especially its connection to Judaism in the diaspora.

Furthermore, even if a new government is established, no one can say how long it will last. In the case of still more elections, Herzog could play a key role in bringing stability to the political system.

In the 1980s, President Chaim Herzog actively worked to break the political impasse of his generation, playing a role in the creation of a national unity government of the two large parties. On the right was the Likud headed by Itzhak Shamir and on the left was Labor, headed by Shimon Peres. Herzog learned from his father the art of political compromise. He is not a person of extremes and was educated under the model of joint solutions.

Now that he has been elected president, Herzog is free of the political fetters of the ideological camps and can bring his worldview into practice.