With his pleasant persona, political record and status as an international statesman, new President Isaac Herzog could be the answer to the divides that have plagued Israeli society for years. 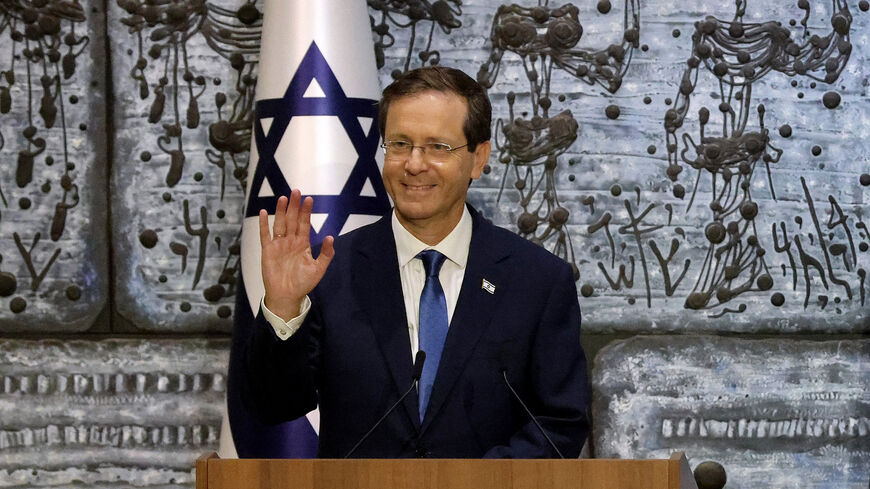 Israeli President Isaac Herzog gestures during a press conference at the president's residence in Jerusalem during a handover ceremony on July 7, 2021. - EMMANUEL DUNAND/AFP via Getty Images

Israel, a young state, has no long established tradition of official ceremonies. The social and cultural structure of the state encompasses a largely tribal society, with conflicting national narratives among its Arab and Jewish populations and deep divisions between its secular and ultra-Orthodox communities. It is a society made up of more than 9 million people crammed into a tiny piece of land, each group with its own ethos and beliefs. For these reasons, the country tends not to unite around ceremonies.

During one of the most turbulent and divisive times in the country’s history, the July 7 inauguration of Isaac Herzog as the country’s 11th president stood out.

Herzog managed to get all the diverse tribes that make up Israeli society to coalesce around him. He brought together Arabs and the ultra-Orthodox, leftists and supporters of the far right. They all went out of their way to congratulate him on his election.

For a few hours, Knesset members from all the different factions called a cease-fire in their incessant fighting and focused on the moving inauguration ceremony. There was an equestrian guard, a military band, a red carpet and children’s choirs to accompany Herzog to the Knesset, where he was sworn in.

Herzog is a former leader of the Labor Party whose last official position was chair of the Jewish Agency. He is also the son of Israel’s sixth president and the scion of a long and aristocratic line of rabbis. He chose to be sworn in on a 100-year-old family Bible that survived the Holocaust. His grandfather carried it with him since the end of World War II. Herzog’s father, Chaim Herzog, was sworn in as president on the same Bible 38 years earlier.

In his inaugural address, Isaac Herzog waxed emotionally about “the book that survived World War I and World War II, immigration to Palestine, the siege of Jerusalem and the riots against the Jewish settlement in the country. It is a book that survived all sorts of turbulent journeys, a book that marks days of family celebration and memory, a book of life, the book of books.”

Though Herzog’s speech contained abundant references to Jewish sources, he also made a point of stressing his commitment to Israel’s Arab population. As he put it, he would be “president of everyone.” He focused on the polarization that Israel has experienced with such intensity over the last two years.

Herzog experienced it himself last week, when his decision to appoint former Prime Minister Benjamin Netanyahu’s spokesperson to his own office. Groups aligned with the left who felt betrayed by this decision demonstrated outside Herzog’s house. They argued that the appointee was an inseparable part of “Netanyahu’s apparatus of incitement and lies.”

Despite the media outcry and public pressure, Herzog refused to concede. The way he handled himself gives a sense of how he intends to carry himself in the future. Herzog wants to be president of Netanyahu’s supporters and the right no less than of his own political supporters. He used his speech to congratulate both new Prime Minister Naftali Bennett and Netanyahu as chair of the opposition.

Herzog said, “The gaping wounds along the length and breadth of our society still bleed. The structural and social problems that weaken entire sectors of our society perpetuate the difficulties we face. We must recognize that there are many among us — too many, in fact — whose daily lives are neither simple nor fair. There are many who do not get a real chance, many for whom equal opportunity is light years from the reality of their lives. Ignoring this will not get us anywhere.”

Judging by his speech, Herzog recognizes that the task he is facing will not be easy, especially after the last two and a half years, which saw Israeli society torn apart by internecine fighting from one election to the next, trapped in a state of political instability.

The current government has already faced problems in gaining a Knesset majority in the last few days. Just one day before his inauguration, the Knesset saw another sleepless night of squabbling between the coalition and the opposition over the extension of an amendment to the citizenship law. Anyone familiar with the history of the Knesset will be hard pressed to remember a government that got its start in such an atmosphere.

Nevertheless, for a few hours, all Knesset members seemed to embrace Herzog’s message of unity. What is it about Herzog that makes him a consensus figure in Israel in such polarized and turbulent times? How has he managed to do it when each group is convinced that its way — and only its way — is right?

First, there is his political and personal temperament. Even when he ran against Netanyahu for prime minister in 2015, Herzog refused to get sucked into an ugly war of words. He was never drawn to extremes. He was always easy to get along with, perhaps even too willing to appease his opponents. He always made himself accessible, answering his own phone and maintaining direct contact with thousands of people. Many of them were happy to congratulate him in media interviews and on social networks. They spoke about how they knew him personally.

Furthermore, Herzog is seen as an appropriate choice because of his talents and skills, including in the international arena, where he has what it takes to represent Israel to other world leaders. He spent his teen years in New York, attending a religious high school while his father served as Israel’s ambassador to the United Nations. He is also intimately familiar with the job of president, having seen his father in the role. His father is still considered one of Israel’s most influential and admired leaders, and the younger Herzog has close ties with all sectors of the American Jewish community. He has already committed himself to healing the relationship between the Reform and Conservative communities after it suffered so much under Netanyahu.

Interestingly, Herzog also maintains an excellent personal relationship with Netanyahu himself. Both Netanyahu and his wife Sara, who has not appeared much in public recently, attended the entire ceremony just one day before they are set to leave the prime minister’s residence on Balfour Street that became a symbol of Netanyahu’s long, strong-armed rule. After 12 years in office, Netanyahu's participation in the inauguration ceremony as chair of the opposition is one of the most iconic symbols of the change of government. In just one month, Israel has a new prime minister and a new president whose most important task will be to serve as the voice of calm and healing for a conflicted society still fighting over its identity.