Iranian authorities continue to pressure the Iraqi government into waiving its travel visa between the two countries. 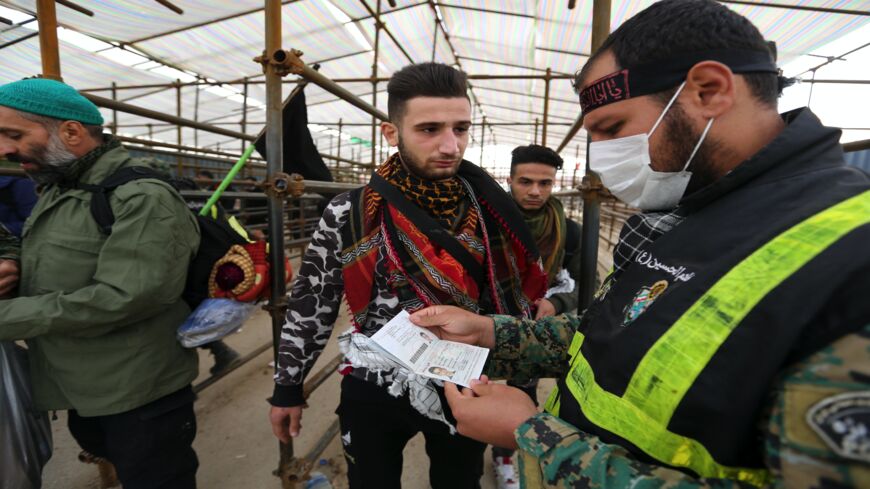 An Iranian policeman checks the travel document of a pilgrim at the Mehran border point between Iran and Iraq, as thousands of Shiite Muslim Iranian pilgrims headed toward the central Iraqi shrine city of Karbala on Oct. 27, 2018, ahead of the Arbaeen religious festival. - ATTA KENARE/AFP via Getty Images

BAGHDAD — During a meeting between Iranian ambassador in Baghdad, Iraj Masjedi and acting minister of health, Hani Iqabi on Jul 12, the latter announced that Iraq is planning to resume the travel of Iranians to Iraq. The travel has been banned after the pandemic.

As the month of Muharram draws near and with thousands of Iranians expected to flock to the Iraqi city of Karbala to commemorate the killing of Imam Hussein bin Ali, the Iraqi government is facing Iranian pressure to waive the visa requirement between the two countries.

The Iranian Council of Ministers decided on June 9 to waive the visa for Iraqis provided Iraq also cancels the visa requirement for Iranians, but Iraq has yet to reciprocate.

Iran’s Ambassador to Baghdad Iraj Masjedi said the issue of entry visas between Iran and Iraq “is not limited to the occasion of visiting the holy shrines in the month of Muharram, and we are currently waiting for the approval of the Iraqi side to implement this decision.”

“We entered into negotiations with Iraqi Prime Minister Mustafa al-Kadhimi on the cancellation of visas, and a joint committee has been formed in this regard, the meetings of which led to a bilateral agreement that is currently being drafted,” he added.

Baghdad currently grants a three-month visa to Iranian visitors for $40, which provides needed revenues that contribute to managing the economic crisis that the country is going through and falls within Kadhimi’s plans to maximize the country’s non-oil resources and reduce its dependence on oil, knowing that oil sales account for 95% of the federal budget imports. Differently put, the visa waiver decision at this particular time is not easy to make.

During talks with Iranian President Hassan Rouhani in 2019, former Iraqi Prime Minister Adel Abdul-Mahdi rejected an Iranian request to cancel the visa between the two countries. But he agreed it would become free of charge in what reflects constant Iraqi concerns over border travel with Iran remaining fluid, as this negatively affects the security and economy of Iraq.

The Iraqi government launched in February an exceptional program to lift entry visas for citizens of dozens of countries, with the aim of encouraging investment movement in Iraq. But Iran, with its current economic situation, is not considered an investing country in the Iraqi market.

On the contrary, the US sanctions on Tehran have affected the Iraqi economy due to the increase in the smuggling of hard currency from Iraq to Iran and the disruption of many Iraqi industrial and agricultural projects by militias and parties loyal to Iran, with the aim of turning Iraq into a large market for Iranian goods.

An informed source in the Iraqi Ministry of Interior told Al-Monitor, “The issue of visas with the Iranian side is very sensitive and complicated for many reasons, including the social and religious relations between the two countries and the volume of trade exchange. However, Iraq is currently in need of such funds.”

“The issue of visas with Iran is also related to the security situation and the control of smuggling operations that are constantly taking place at the border between the two countries,” he added.

The source expected “the Iraqi government to work on introducing a new mechanism for granting visas — one that would facilitate procedures for the citizens of the two countries according to specific controls and rules.”

The Iraqi border with Iran represents the main crossing for the smuggling of drugs and weapons into Iraq, most of which enter through the official border crossings that were marred by corruption up until Kadhimi took office in mid-2020 and launched a campaign to fight border corruption and subject borders to permanent control.

Member of the Security and Defense Committee in Iraqi parliament Abdul-Khaleq al-Azzawi played down the importance of maintaining or canceling entry visas between Iraq and Iran, saying, “I do not expect joint cooperation between Iran and Iraq in this regard."

“I don't think this proposal is purely Iraqi, as it could be made by one of the influential parties in power,” he said, in reference to the extent of Iranian influence in Iraq and its ability to affect the political decision in the country.

The issue of visas between Iraq and Iran remains a subject of discussion and debate among political elites and in popular circles, similarly to other issues related to the relationship between Iraq and the countries in the region. The government’s insistence on maintaining the visa as an additional source of resources will lead to a political and popular opposition reaction from those who sympathize with Iran. Conversely, canceling the visa requirement will provoke the rest of the Iraqi parties opposed to the Iranian role in Iraq.

Tehran’s insistence on raising the trade exchange with Iraq from 12 billion to 20 billion annually is what seemingly prompted it to rush to lift the travel visa with Iraq, especially considering that about 3 million Iranians enter Iraq on a yearly basis, the majority of whom are traders, craftsmen and small-business owners.

Tehran is seeking to develop its projects and trade in order to bring hard currency to Iran and bypass the ordeal of the US economic sanctions imposed on it.