The Iraqi government has taken several new initiatives to fight corruption, from automating border crossings, arresting corrupt figures and imposing restrictions on the economic interests of militias and political parties. 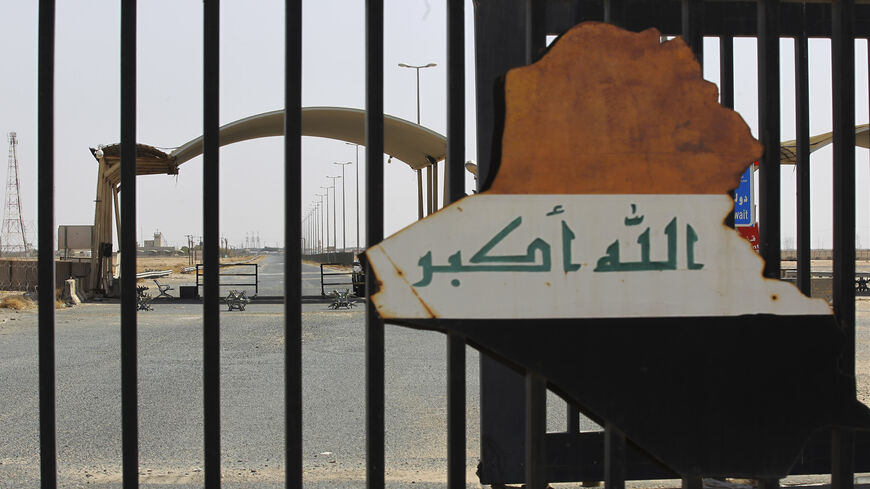 A picture taken during the visit of Iraqi prime minister to the southern city of Basra shows the Safwan border crossing with Kuwait, July 15, 2020. - Ahmad al-Rubaye/POOL/AFP via Getty Images

Iraq signed a contract May 27 with the United Nations Conference on Trade and Development (UNCTAD) to automate its customs procedures in a bid to eliminate financial and administrative corruption and expel armed militias from border crossings with neighboring countries.

This step is the second phase of the war on corruption at border crossings after the military operation launched earlier by the current government when it assumed its duties.

Iraq has more than 24 border, land and sea ports with neighboring countries. These outlets achieved revenues around $1 billion in 2020. Yet corruption at the Iraqi crossing points causes Iraq more than $10 billion losses annually, not to mention the smuggling of drugs and goods that are prohibited from being imported because of their abundance locally.

Finance Minister Ali Allawi said in a press statement that Iraq needs to improve the standards of public administration in all state departments. “The ministry is determined to implement the Automated System for Customs Data (ASYCUDA) at the General Authority of Customs, which was provided free of charge as a result of the efforts of continuous meetings with the UNCTAD,” he said.

He noted that this system will contribute to the development of customs departments and improve their performance, which in turn achieves efficient management and financial sustainability and diversifies the economy in accordance with the principles of integrity, transparency and fighting corruption.

Mustafa al-Kadhimi’s government had launched its financial and fiscal reform plan known as the White Paper, and the 2021 budget was the first budget drafted based on this reform plan. According to Article 16 of the budget law, state institutions are to automate the tax and customs system, link all units subject to tax and customs to an electronic system and collect customs duties for imported goods on the basis of the foreign currencies sold by the Central Bank to finance foreign trade.

In an interview with Al-Monitor, Sadiq Huwaidi, director general of the customs department at the Ministry of Finance, who is responsible for implementing the customs modernization and reform program, said that Iraq will adopt the latest version of the automated system for customs procedures.

He noted, “ASYCUDA will help us simplify procedures at border crossings, increase our financial revenues and provide a real database on foreign trade. This system will be a window involving several institutions concerned with foreign trade, including the Central Bank and the Ministry of Commerce. Its objective is to curb corruption and prevent foreign currency smuggling.”

He noted that the system will be managed by the Iraqis but with the help of foreign expertise, and that Iraqis will soon start receiving training. A series of training sessions is already scheduled for businessmen.

Huwaidi added, “This will be implemented at all border ports. We will focus on the seaports as the most active. The system will include cameras and goods screening devices. The system will be implemented a month from now. It has proved its success in more than 60 countries. By applying this system, Iraq will be joining several international organizations concerned with foreign trade.”

An informed source working in one of the companies operating at the border crossings told Al-Monitor that Kadhimi’s government is adamant about fighting corruption, but that the challenges are immense, given entrenched political parties and militias that have taken advantage of the system since 2003.

“Applying modern technologies at the border crossings is a game changer. Yet it is difficult to implement amid official outlets that remain outside the state control after the end of official working hours,” the source said.

Moreover, the source accused the majority of the employees at the border crossings of being corrupt and backed by senior politicians. “I do not think this system will be implemented. Some official outlets and their revenues are controlled by militias and parties. Should this system be applied, merchants will head toward the outlets dominated by clans, militias and political parties to bring in goods. Importing goods through official outlets means higher prices in retail markets. The majority of merchants do not pay taxes but rather bribery.”

Iraq has 11 land border crossings with neighboring countries, in addition to other crossings in the Kurdistan Region.

Economist Dargham Mohammed Ali praised automation as an excellent option. “But it is not the final solution to corruption,” he told Al-Monitor. “Corruption at border crossings requires a united political decision, cooperation between Baghdad and Erbil, and the closure of all unofficial ports. A united political decision against corruption is the starting point of economic reform, which must start with controlling the borders.”

Ali said that he expects unofficial outlets to increase in the coming period after the implementation of automation, as a means to avoid paying taxes.

Since 2003, Iraqi governments have implemented several automation programs in state institutions. These were interrupted amid pressure by corrupt quarters. Economist Sadiq al-Hamashi told Al-Monitor, “The problem in Iraq is not automation. This has been implemented in several institutions for years. The problem is rather the will to implement automation. The influence of corrupt quarters beats all efforts for reform.”

Hamashi said that the automation of customs will curb blackmail practices by businessmen, increase state revenues, expel gangs and corrupt officials from border crossings, and reduce foreign currency smuggling. “If this succeeds, non-oil revenues could increase by more than 20% during the current year. This experience should be transferred to other state institutions including those managing electricity and taxes as well as the municipality of Baghdad,” he concluded.