Prime Minister Mustafa al-Kadhimi's government has set its sights on controlling corruption that could ease the impact of the financial crisis in the country, while prioritizing the border outlets. 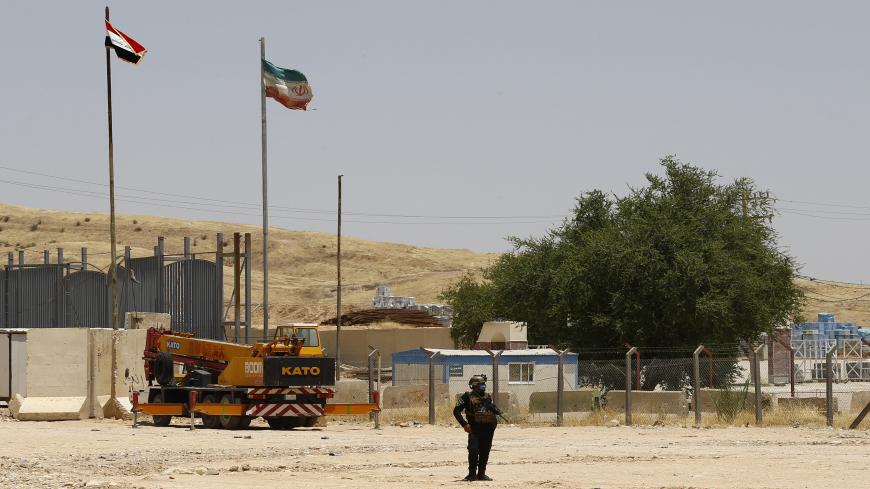 A member of the Iraqi security forces stands guard on the Iraqi side of the Mandil crossing on the border with Iran, Iraq, July 11, 2020. - THAIER AL-SUDANI/POOL/AFP via Getty Images

Prime Minister Mustafa al-Kadhmi's spokesman Ahmad Mulla Talal said that the government is determined to take resolute actions to end corruption at the border outlets. In a press conference June 30, Mulla Talal said, “Pretty soon the government will take resolute action under the prime minister’s direct supervision to establish state control over the border outlets, which the beneficiaries and corruption mafias have tainted,” without naming any.

Soon after, Kadhimi has started a campaign to impose full government control on the borders outlets. The campaign has started on July 11, when Kadhimi visited Diyala province. He reopened Mandalay border outlet with Iran and ordered the Rapid Response Forces to take control of the border and stop any illegal actions there.

The next step was in Basra during Kadhimi trip on July 15. He ordered security forces to impose strict security and military measures on the province borders with Iran and Kuwait. Basra is Iraq's only outlet to the Persian Gulf. The security of Iraqi ports have been handed to the Marine Force Command and the land borders which include Shalamcheh outlet with Iran and Safwan outlet with Kuwait were handed to Basra Operations Force.

The dwindling oil prices and the coronavirus outbreak have caused a stifling financial crisis in Iraq. The oil revenues that Iraq mainly depends on plummeted by nearly 50%. Based on that, the country will have to resort to domestic and foreign borrowing enabled under the law that parliament voted on June 24. The law allows the government to borrow $13 billion to pay employee salaries and to finance key sectors, such as the health sector.

According to Mulla Talal, the border outlets consist of important state resources, but “most of their revenues go to the pockets of the beneficiaries and corruption mafias.”

There are 11 land border outlets, six seaports and three airports in Iraq, through which goods and commodities arrive from nearly 130 countries to the official institutions, merchants and investors. Nevertheless, the head of the parliament's Finance Committee, Haitham al-Jubouri, told a local TV channel, “There are nearly 10 land border outlets that do not originally fall under the state’s authority in Maysan and Anbar provinces, and the Kurdistan Region of Iraq. These border outlets are run by the armed parties, clans and factions.”

Jubouri explained how corruption is occuring at the borders and preventing the state treasury to receive the funds. He said, “There are investors who are taking advantage of the tax exemptions that are designed to encourage investments, by importing more than the investment project requires. For instance, there is a need for 10 tons of steel for a particular investment project. The investor would import 100 tons, use 10 for his project and sell the rest on the market.” This example shows how the investors are evading taxes and custom duty at the same time.

He added, “Fraud at the border outlets and customs takes place while goods [entering Iraq] are registered. Imported goods worth $3,000 are reported at $1.”

Alaa ad-Din al-Qaisi, spokesman for the Iraqi Border Ports Authority, confirmed what Jubouri said. He told Al-Monitor, “Food imports are mostly exempted from fees, which leads to reduced revenues. The investors are also being permitted to bring in the raw materials they need.”

Although there are no statistics on the state treasury’s losses because of the corruption at the borders, Kadhimi said, “Iraq’s loss of a number of border outlets due to the armed groups and bandits’ control over them is causing the country a loss ranging from $3 billion to $4 billion.”

On June 12, head of the Iraqi Border Ports Authority Omar al-Waeli submitted to Kadhimi a request to have the counterterrorism forces control the security situation and protect the outlets from “the outlawed groups that meddle in the work of the border outlets” — without naming them.

Al-Monitor spoke with two members of parliament in order to learn about the parties that control the outlets. Yet neither mentioned any names.

Speaking to Al-Monitor on condition of anonymity, an officer at the ports in Basra province said that “the same thing happening at the ports is happening throughout Iraq,” in reference to the political bodies dividing among themselves the ports and their resources, just as the political parties are dividing into shares the posts in government institutions.

“It is a hard task to control the outlets and ports. … Anyone who discloses [information about] corruption would be sanctioned,” noted the officer, who was threatened of being deported to another province because he rejected the entry of expired goods.

Katea al-Rikabi, a member of the parliamentary Security and Defense Committee, confirmed the officer’s remarks. “The majority of the outlets in Iraq are out of control. There are violations there and some of them fall under the political parties’ control,” he said.

Speaking to Al-Monitor, Rikabi noted, “The plan that parliament heard from the prime minister requires a comprehensive change in the border outlets’ management at the level of managers, and the imposition of the presence of security forces."

In contrast, Jubouri believes that ending corruption at the outlets requires more than security services. “Past experiences show that more security agencies at the outlets result in an increase in bribes that they share among themselves,” he said.

Mahasin Hamdoun, a member of the federal parliament's Finance Committee, said corruption and money waste are caused by border outlets that do not function properly. She told Al-Monitor, "There is administrative chaos at the outlets. There is no communication between customs, taxation offices and the central bank that grants the merchants and companies dollars at the currency auction in order to import goods.”

For the Kadhimi government, the border outlets dossier is a top priority in the talks with the Kurdistan Regional Government, in the absence of any bilateral agreement so far.

Qaisi did not disclose the next steps to control corruption in the border outlets. He told Al-Monitor, "The revenues of the border outlets are witnessing an increase month after month due to the continuous authorities' monitoring and scrutiny."

According to Jabouri, Hamdoun and Rikabi, the outlets need more than scrutiny to control corruption.

Jubouri disclosed features of the government's plan to control the outlets through "a shift to an automation system in the areas of border outlets and customs," noting that "the government has received offers from foreign companies in this field."

Hamdoun is not very optimistic, saying, "The problem is that the political forces that use the outlets' money will block any measures to control it." On the other hand, Rikabi seemed more optimistic and said, "Parliament will support Kadhimi in his efforts to control corruption."