As Erdogan’s dependency on Kurdish votes becomes more urgent, violence and other oppression against Kurds are on the rise. 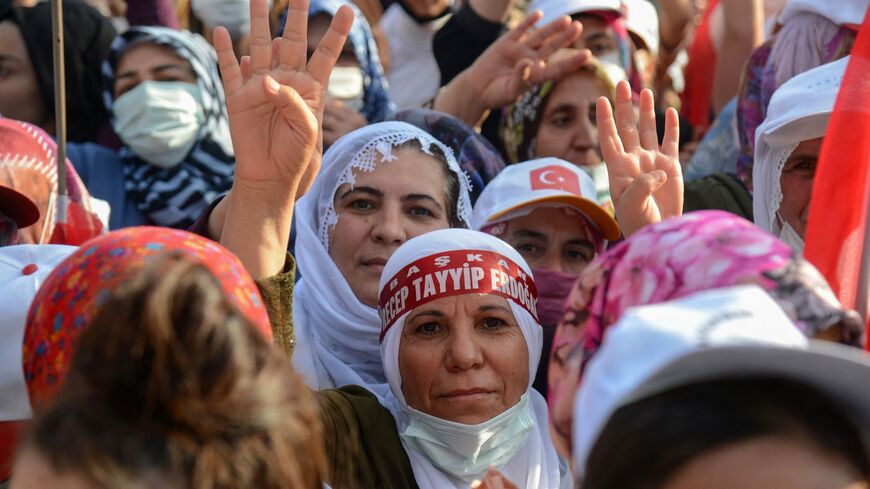 Supporters of Turkish President Recep Tayyip Erdogan listen to him during the opening ceremony of the Bismil Agricultural Irrigation Facilities in Diyarbakir province, on July 9, 2021. The Tigris River goes through the plain. - ILYAS AKENGIN/AFP via Getty Images

Is the Turkish government returning to the idea of reconciliation with the Kurds? Is another “Kurdish opening” possible? Turkish President Recep Tayyip Erdogan’s early July visit to Diyarbakir province, a major Kurdish area, rekindled hopes that this might happen.

Some observers came to the conclusion that the unexpected visit was the result of Erdogan's realization that he will need a segment of the Kurdish vote to win the 2023 presidential election. And Erdogan was quite pleased to announce that a mayor from the Dicle district of the province, was joining the president's Justice and Development Party (AKP).

At the same time, a quick scan of the news indicates violence against the pro-Kurdish Peoples’ Democratic Party (HDP), which speaks up for Kurdish and other minority rights, continues.

On June 17, a young woman working at the Izmir HDP building, Deniz Poyraz, was brutally murdered. In less than a month following the vicious hate crime, there were two other armed attacks on HDP, one in the Aegean town of Marmaris and another in Istanbul. Threats to HDP strongholds in various cities have become almost routine.

Meghan Bodette, an independent researcher focused on Turkish, Syrian and Kurdish issues, told Al-Monitor, “Multiple armed attacks against HDP and Kurdish targets in western Turkey carried out by individuals with similar profiles over the course of one month are unlikely to be a coincidence. State and state-affiliated forces in Turkey have used violence against Kurdish opposition parties before, though primarily in Kurdish-majority regions. Nonstate actors have also singled out progressive Kurdish targets at sensitive times for the government — like the series of ISIS [Islamic State] attacks between June and October of 2015.”

The attacks are not limited to Kurds officially connected with the HDP. A Kurdish family that has lived in Konya province, in central Anatolia, for the last 24 years was viciously attacked by 60 ultranationalists. The hospitalized family members told the media even before the lynching attempt that they had been harassed by racist groups screaming, “We won’t allow you to live here.”

It is not only the violent attacks against Kurds that made the news in the last month. Nine imams were arrested for leading prayers in Kurdish. COVID-19 vaccination rates are the lowest in Kurdish majority cities as the Health Ministry continued to refuse to launch a Kurdish campaign for vaccination.

If Erdogan understands his dependency on Kurdish votes, would not at least a reconciliation process be in the works? “These recent attacks may be an effort to intimidate the HDP's core Kurdish voters as well as its progressive, pro-peace Turkish voters — the coalition that brought the party over Turkey's electoral threshold for the first time. As Erdogan faces competing factions in his government and his poll numbers drop, this kind of nationalist and anti-opposition violence may become more prevalent,” Bodette said. Most other experts Al-Monitor spoke with expect oppression against Kurds to persist, or rise, as election nears.

How can we explain the Diyarbakir visit and Erdogan’s words on keeping his promises to Kurdish citizens while violence and oppression against Kurds continues? Three possible explanations for this disconnect are explored below.

The first lies in understanding why Erdogan visited Diyarbakir. As Erdogan launches the election campaign for 2023, we can expect to see an increased frequency of AKP officials’ televised rallies from Kurdish-majority towns. A senior AKP official, who is also Kurdish, told Al-Monitor on condition of anonymity, “Erdogan went to Diyarbakir, because he could. He is the only politician in Turkey who can travel to any city and hold rallies and have crowds cheering for him. Now the whole world sees Kurds are not against Erdogan and the AKP embraces Kurds. We are fighting terrorists and those who support terror, and we are protecting our Kurdish citizens from their attacks.”

Some see this thinking as misguided. Abdurrahman Gok, a seasoned journalist from the Kurdish region, told Al-Monitor, “Support for Erdogan among Kurdish voters is eroding fast. For example, before his visit to Diyarbakir, Erdogan said he would be announcing good news, but still residents of Diyarbakir didn’t greet him. People of the city did not join his rallies. In previous visits, there was curiosity in the city. Even people who did not support the AKP would gather in coffeehouses to watch Erdogan’s speeches live. This time, nothing. In politically engaged corners of the city, we observed no chatter about expectations before or after Erdogan’s visit about his speech. Most of the people of Diyarbakir said, ‘There is not a word Erdogan can say to the Kurds, so we do not want him to come to the city.’ I think the AKP understands they lost the Kurds, and know well that a ‘promise of good news’ is not sufficient to gain back the trust of Kurdish voters.”

Gok said the real AKP strategy “is to find pathways to disenfranchise Kurds further. Meaning to generate ways so Kurds won't cast ballots. HDP policies and its existence are criminalized. We do not see an olive branch coming from the government.”

The second explanation is that the mainstream media acts as if the AKP and Erdogan could at any time reinitiate the peace process with Kurds if the HDP and the Nationalist Movement Party (MHP) the AKP is allied with do not block such a reinitiation. The ultranationalist MHP rejects reconciliation with the Kurds. The HDP is portrayed as being the same as the Kurdistan Workers Party (PKK), considered a terrorist group by Turkey and the United States. Turkey’s efforts to diminish Kurdish support for the PKK, which is seen as a people’s insurgency movement by millions of Kurds, overlaps with political efforts to ostracize the HDP and push it out of the public domain. “While the HDP is being disenfranchised, we signal to the Kurds that only the AKP can deliver for you,” the AKP official said.

Yektan Turkyilmaz, a research fellow at the Forum Transregionale Studien in Berlin, told Al-Monitor, “The visit at best is one to prevent further loss of votes from pro-government Kurds. Erdogan’s messages are directed at Kurds who do not engage in a quest for rights.” This strategy to campaign for the votes of obedient citizens of various stripes has become a pattern for Erdogan.

Turkyilmaz also raised a red flag about how the Kurdish cause is a battleground between the MHP and the AKP where Kurds end up stuck in the middle.

It is perplexing to envision the AKP restarting a peace process with the Kurds while the party is still in a coalition with the MHP. The role and the power of ultranationalists in government is difficult to gauge. The AKP-controlled media sometimes exaggerate the reach of ultranationalists.

Gokhan Ozbek, an independent journalist and producer of 23 Derece independent news center, analyzed data from three years of the presidential system and found clues that show the limited powers of the MHP. None of the 282 bills the MHP submitted to parliament became law. They were all rejected, just like all the opposition parties' proposed bills' only AKP bills passed.

Ozbek told Al-Monitor that “different groups who support Erdogan within the state battle on different issues. Even though a subgroup might value an opening with Kurds as valuable, other groups act to prevent the realization of such an opening. This undercurrent leads to inconsistencies.” Still, they continue to operate under the AKP umbrella.

The third explanation for the dichotomy between seeking the votes of Kurds and the violence against them is rising Kurdophobia in Turkey. Faysal Sariyildiz, a former Kurdish lawmaker in parliament, told Al-Monitor, “From the 1990s, in Erdogan we had a politician who excelled in planning, but a vindictive one. The policies he followed inevitably deepened this crisis. So now he is in a cul-de-sac resulting in political trauma. We cannot find consistency in his policies anymore.”

Sariyildiz said Erdogan has leaned on ultranationalist rhetoric for so long that a significant portion of “society is poisoned with sexist, racist, Islamist rhetoric. Attacks against the HDP to some extent are carried out by government offshoots, but not all of it is done with government control. The hatred-led society can spin out of control and engage in violence at any time."