Turkish President Recep Tayyip Erdogan’s visit to Turkey’s largest Kurdish-majority city is seen as a sign of his recognition of how crucial the Kurdish vote will be in his bid for reelection in the next polls. 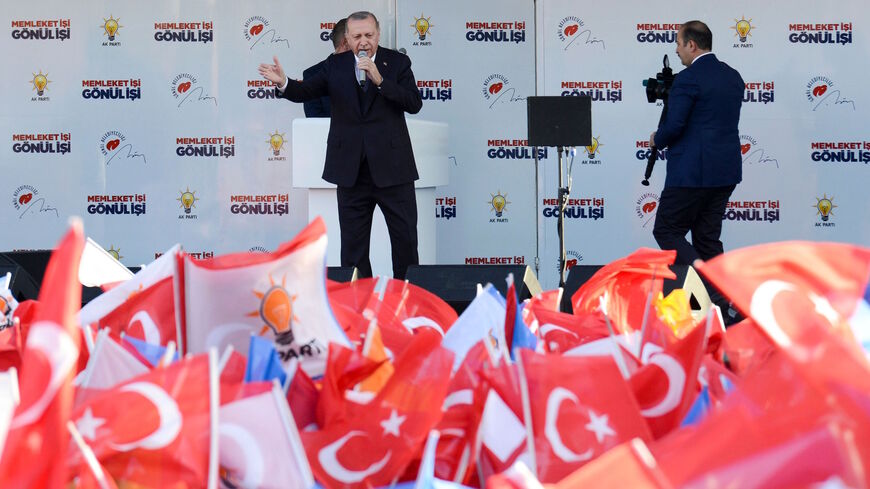 DIYARBAKIR, Turkey — Turkish President Recep Tayyip Erdogan’s recent visit to Diyarbakir, the central city of Turkey’s mainly Kurdish southeast, is largely seen as an effort to salvage his Kurdish vote ahead of potential early elections, as pollsters report a downtick in his popular support, both among Kurds and across the country.

Erdogan has enjoyed solid popularity among conservative Kurds, drawing mostly on his Islamic credentials, and his Justice and Development Party (AKP) has been the only real rival in the southeast of the Peoples’ Democratic Party (HDP), the standard bearer of the Kurdish movement in Turkey. He had won much credit also for settlement talks with the Kurdistan Workers Party (PKK), the armed outfit that has fought Ankara since 1984 and is designated as a terrorist group. But since the talks collapsed in 2015, he has shifted to a hard-line nationalist agenda, marked by a ferocious crackdown on the PKK and the HDP, and aligned with the far-right Nationalist Movement Party (MHP) to bolster his electoral fortunes.

Erdogan’s trip to Diyarbakir July 9 — the first in 2½ years — was preceded by speculation he might be bracing to revive the peace process to make amends with the Kurds amid growing anticipation he might bring the next elections forward from 2023 before Turkey’s economic woes erode further his popular support. HDP parliament member Erol Katircioglu stoked the speculation ahead of the visit, saying the HDP would be ready to mend fences with Erdogan should he revive the settlement process.

In the streets of Diyarbakir, however, few seemed optimistic. Most residents who spoke to Al-Monitor said they had no big expectations from the visit, though one shopkeeper insisted the Kurds should continue to back Erdogan in acknowledgement of his past efforts to resolve the Kurdish issue.

Still, thousands of people packed the venue where Erdogan was to speak. Some were curious to see him live, others hoped to pass requests for jobs. One young man said he came to convey his resentment with Erdogan’s ally, MHP leader Devlet Bahceli.

In his address to the crowd, Erdogan fell short of announcing a new settlement process, but owned up the broken one and rejected responsibility for its collapse. Referring to his 2005 speech in Diyarbakir, when he memorably declared, “The Kurdish problem is my problem,” Erdogan said he stood behind his words. He lashed out at the HDP and the PKK, saying, “Yes, we were the ones to initiate the settlement process but it was not us who ended it. What ended the settlement process was their ill will, malicious intentions and secret agendas. And those who claim to be politicians never distanced themselves from violence and terrorism.”

In his most notable pledge, Erdogan announced that the Diyarbakir prison, notorious for its torture chambers in the military rule after the 1980 coup, would be converted to a cultural center.

The HDP convened in Diyarbakir two days later. Responding to Erdogan’s messages, the party’s deputy co-chair, Tayip Temel, said, “No matter what AKP leaders and representatives say, [the Kurdish people] have nothing to do with a mindset that has left its will, conscience, justice and the democratic solution of the Kurdish issue hostage to the mercy of the MHP.”

Diyarbakir-based researcher and analyst Reha Ruhavioglu believes Erdogan’s visit had two main objectives: consolidate his base ahead of potential early elections and win favor with the Joe Biden administration to ease Ankara’s fraught ties with Washington.

According to Ruhavioglu, Erdogan is seeking to reach out to the many Kurds who tend to gravitate away from him but remain undecided whom to back. He is basically telling them, “I’m still here. We’ll resolve the [Kurdish] issue when the time comes.” Erdogan’s messages will likely fall short of winning back lost voters, but could help slow the meltdown in his Kurdish base, he told Al-Monitor.

A fourth of AKP voters in the southeast have been drifting away from the party, which had mustered about 35% of the vote in the predominantly Kurdish region in the 2018 elections, according to a poll conducted in late December by Rawest, a Diyarbakir-based research company. Less than 30% said they would back Erdogan’s reelection as president.

As for the Washington-related impact, Ruhavioglu pointed to Biden’s emphasis on democratic values, which, he said, is leading Erdogan to “put on airs of democratization.”

The researcher said he saw no sign of a serious preparation to revive settlement efforts on the Kurdish issue, but argued that Erdogan’s messages had a morale-boosting effect on Kurdish voters who wish to stick to the AKP despite their resentment over the party’s alliance with the MHP, and could serve to prolong the undecidedness of those who vacillate toward opposition parties. “Yet one could hardly say that the visit aroused any excitement among voters the AKP has already lost or those in the opposition block,” he added.

Sedat Yurtdas, who represented the Kurds in parliament in the early 1990s and is now the deputy head of a think tank in Diyarbakir, said that Erdogan was facing a big problem of credibility. The president may have owned up to his past pledges to resolve the Kurdish issue, but “those who were involved in or contributed to that process are now either in prison or standing trial, facing heavy sentences,” Yurtdas told Al-Monitor, referring to senior HDP members.

He agreed that Erdogan’s visit to Diyarbakir appeared to be an election investment, stressing that the 2019 mayoral elections in Ankara and Istanbul had strikingly demonstrated how crucial the Kurdish vote could be. Candidates of the main opposition Republican People’s Party wrestled Turkey’s two biggest cities from the AKP, backed by a coalition of opposition forces, including the Kurds.

Yurtdas said Erdogan would struggle to entice Kurds back unless his government makes some bold moves on the ground and offers self-criticism over its repressive policies, especially since Erdogan assumed sweeping executive powers in 2018, backed by the MHP. “It’s plain as day how much the Kurds have been ostracized, how much their political space has shrunk and how people have been suppressed, unable to express their thoughts and opinions,” he concluded.