Egypt looks to strengthen its relations with Senegal and win it over in the Grand Ethiopian Renaissance Dam negotiations, to be held under the auspices of the African Union, which is to be headed by Senegal next year. 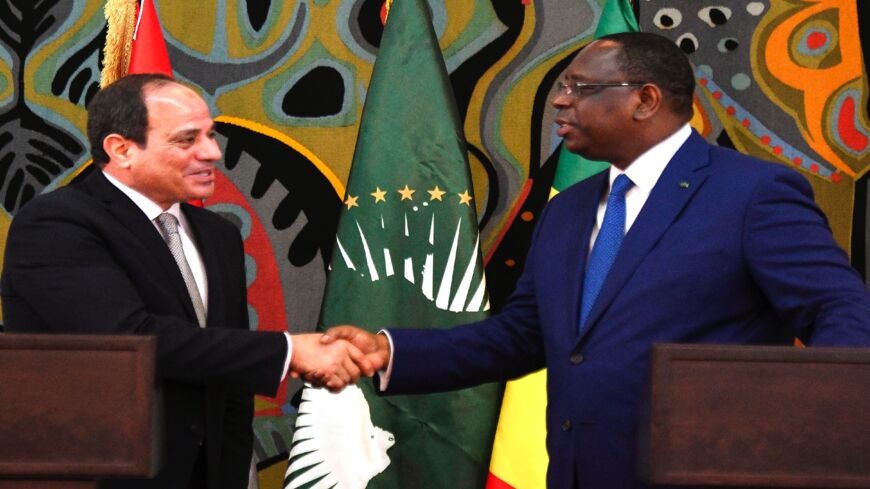 Egypt's President and current chairperson of the African Union Abdel Fattah al-Sisi (L) takes part in a joint press conference with Senegalese President Macky Sall at the Presidential Palace in Dakar for an official visit on April 12, 2019. - SEYLLOU/AFP via Getty Images

Egypt is looking to strengthen its relationship with Senegal, which will hold the presidency of the African Union (AU) next year.

In this context, Egyptian Ambassador to Senegal Noha Khader announced in an interview with the Senegalese newspaper Le Soleil on July 23 Egypt’s support for Senegal’s upcoming presidency of the AU, set to start as of January 2022.

The Egyptian support for Senegal’s AU presidency comes as Cairo gets ready for the AU-sponsored negotiations that may be relaunched soon to discuss ways to reach a binding legal agreement between Ethiopia, Egypt and Sudan following the completion of the second filling of the Grand Ethiopian Renaissance Dam (GERD) and the Ethiopian preparations for the third filling phase.

Egypt has been seeking to boost its economic presence in Senegal, and the Egyptian Ministry of Industry announced July 24 the organization of more periodic exhibitions of Egyptian products in the West African country.

Egypt and Senegal also signed July 9 a protocol for the establishment of the Egyptian-Senegalese Joint Business Council, which aims to double the volume of trade between the two countries — which stood at $67.6 million in 2020 — to more than $200 million over the next three years.

Senegalese Minister of Trade and Small and Medium Enterprises Aminata Asoum Diatta said during the signing ceremony that “her country is keen to advance economic relations with Egypt and enhance joint cooperation between the two countries in the fields of foreign trade and small and medium enterprises.”

On July 7, Egyptian Minister of Trade and Industry Nevine Gamea visited Senegal as the head of a large Egyptian trade delegation that included major Egyptian companies.

On July 10, Senegal announced its readiness to study the establishment of direct shipping lines with Egypt and the abolition of entry visas for investors.

The Senegalese Ministry of Trade stated July 8 that Egypt ranks fourth in countries exporting to the Senegalese market.

Egypt has also been seeking to court Senegal through investments. In the field of water and wastewater projects, Khader discussed Dec. 2, 2020, during her meeting with Senegalese Minister of Water and Sanitation Serigne Mbaye Thiam ways to boost joint cooperation between the two countries. The two officials also tackled the investment opportunities available to Egyptian businessmen in the field of water projects.

In the field of aviation, Egyptian Minister of Civil Aviation Mohammad Manar Enabah discussed during a September 2020 meeting with Elie C. Bay, the Senegalese ambassador to Egypt, the possibility of operating a direct flight between Cairo and Dakar. Enabah also expressed his country’s readiness to provide Egyptian expertise to Senegal in the fields of training, maintenance, and airport management and infrastructure.

Senegal is one of the important African countries that Egypt is trying to mobilize against Ethiopia in the GERD crisis. Egyptian Foreign Minister Sameh Shoukry visited Dakar in April and discussed with Senegalese President Macky Sall the Egyptian position in said crisis.

The recent Egyptian moves toward Senegal prompted Sall to state on July 10 that “his country will chair the next session of the AU in February and will make it a top priority to find a radical solution to the GERD crisis to preserve the historical rights of the Egyptian people.”

Sudan also followed in the Egyptian footsteps to take advantage of Senegal’s AU presidency next year. During her visit to Dakar in May, Sudanese Foreign Minister Maryam al-Mahdi called on Sall to pressure Ethiopia to reach a binding agreement on the GERD.

Ethiopia did not stand idly by in the face of the Egyptian-Sudanese moves toward Senegal. Ethiopian Ambassador to Dakar Melaku Legesse met July 4 with Sall, and the two sides discussed the Ethiopian government’s view of the GERD crisis.

In this context, Nader Nour el-Din, professor of water resources in the faculty of agriculture at Cairo University, told Al-Monitor, “Egypt is fully aware of the extent of the strength and influence of Senegal in Africa and all African organizations.”

“Egypt and Senegal have close relations, and Al-Azhar plays an influential role in Senegal and supports it in the fight against extremism and terrorism,” he added.

In December 2020, a Senegalese delegation headed by General Coordinator of Combating Terrorism in Senegal Saifallah Sol visited Al-Azhar Foundation in Cairo, during which the Senegalese delegation stressed the need for concerted efforts with Al-Azhar Foundation to combat extremism and terrorism in order to achieve security and stability in Senegal.

Nour el-Din pointed out that “the AU, currently headed by the Democratic Republic of the Congo, played a weak role in managing the GERD negotiations during the current year, so Egypt is trying to communicate its position and demands to Senegal ahead of its presidency of the AU.”

He explained, “It is clear that the negotiations will resume once again under the auspices of the AU before the third filling of the dam, a demand that many countries voiced at the [latest] Security Council session on the GERD crisis. So it is necessary to prepare for those negotiations and seek rapprochement with the influential players, most notably Senegal, which is to head the AU that is the current sponsor of the GERD negotiations.”

In April 2019, Sisi visited Senegal in the first such visit by an Egyptian president in 12 years. Sisi met with his Senegalese counterpart, Sall, and both agreed on the need to boost mutual cooperation on the economic, trade and investment levels.

“Senegal may play an influential role in the GERD crisis during its AU presidency in cooperation with regional, international and Arab powers such as China and the US,” Allam added.