In an attempt to counter Turkey’s expansion in West Africa, Egypt and the UAE seek to consolidate their ties with Senegal, the gateway to West Africa, by pushing forward new investments in the African country. 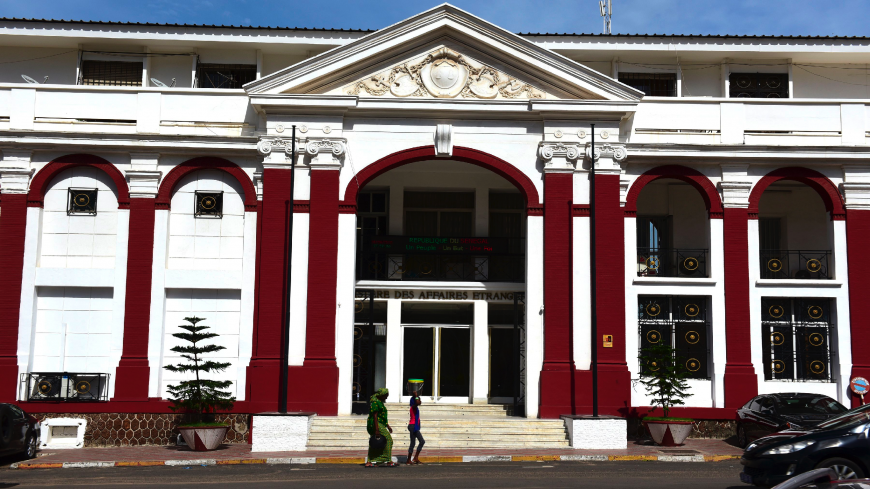 A picture shows the Ministry of Foreign Affairs in Senegal's largest city and capital, Dakar, on Sept. 18, 2018.

CAIRO — Egypt’s parliamentary African Affairs Committee announced Jan. 5 its intention to organize a visit to Senegal in a bid to discuss aspects of bilateral cooperation in agricultural and infrastructure projects and ways to set the wheel of investments in motion between the two countries.

May Mahmoud, a member of the committee, said in a press statement that parliament attaches great attention to “the historical and fraternal ties between the African brothers,” stressing that “Egypt is at the heart of Africa, and no one can influence its historical role in supporting African peoples.”

Over the past period, Egypt has sought to get close to Senegal by all possible means. On Dec. 2, 2020, Noha Khedr, Egypt’s Ambassador to Dakar, met with Senegalese Minister of Water and Sanitation Serigne Mbaye Thiam to discuss ways to enhance joint cooperation between the two countries and identify investment opportunities in Senegal for Egyptian businessmen in water and sanitation projects.

On Oct. 19, 2020, Abdullah Sau, head of the Senegalese Chamber of Commerce, Industry and Agriculture, received Khedr in the presence of the president of the Senegalese-Egyptian Business Council, Khaled Mikati, to discuss opportunities to increase trade exchange of several products between the two sides, notably textiles, construction equipment, carpets and home furniture. The two sides also discussed ways to boost Egyptian investments in the tourism and solar energy sectors.

Moreover, Egyptian Minister of Civil Aviation Mohamed Manar, who is also a pilot, met Sept. 30, 2020, with Elie C. Bay, Senegal’s ambassador to Cairo, and touched on joint cooperation between the two countries in the field of air transport.

Manar stressed during the meeting Egypt’s readiness to provide Egyptian expertise for training, airport maintenance and management, and infrastructure, among others. Both sides also discussed the possibility of operating direct flights between Cairo and Dakar.

These Egyptian moves came in the wake of the official visit on Sept. 11, 2020, of Turkish Foreign Minister Mevlut Cavusoglu to Senegal, a first of its kind at the Foreign Ministry level, to lay the foundation stone for the new building of his country’s embassy in the Senegalese capital, Dakar.

In a press conference, Cavusoglu said the volume of trade exchange with and the number of Turkish companies in Senegal is increasing rapidly.

“We want to raise the volume of trade exchange with Turkey to $400 million, and this is a common goal for us,” Senegal’s Foreign Minister Amadou Ba said during the press conference.

Amani al-Taweel, director of the African Program at Al-Ahram Center for Political and Strategic Studies, told Al-Monitor that the year 2020 witnessed intensive activities on the part of Turkey to consolidate its ties with West African countries, namely Senegal, by providing humanitarian aid and concluding cooperation agreements in various economic, political and social fields, in a bid to keep the lid on the state in Senegal.

“We are building a common future with Senegal, inspired by a deep-rooted historical bond. Our businessmen are ready to make greater contributions to the Senegalese economy,” Erdogan said back then.

The Turkish president also announced the signing of seven commercial and economic agreements with Dakar and said the two countries would expand cooperation in tourism and defense.

For his part, Sall said, “Turkish companies have played a vital role in infrastructure and development projects in Senegal, such as the [building] of the Blaise Diagne International Airport, the Dakar International Conference Center, the Sports Hall, as well as the construction of railways.”

He said Turkey stood at all times with Senegal and President Erdogan is a friend whose relations and cooperation with Dakar have deepened in recent years.

During a press conference on Dec. 31, 2020, the Turkish Red Crescent announced the distribution of medical aid in Dakar, including medical masks and sterilizers, to help the country face the coronavirus pandemic.

“Turkey’s increased moves in this direction have raised the concerns of some countries, such as Egypt and the United Arab Emirates, about Ankara’s ambitions in the region. Cairo and Abu Dhabi will try to block the road on Turkey’s attempts to have a foothold in West Africa,” Amani explained.

On Dec. 23, 2020, Dubai Ports (DP) World announced that it had signed an agreement with the Senegalese government to establish a seaport in deep waters in the Ndayane area, with investments amounting to $1.127 billion in two phases: The first includes the spending of $837 million, and the second $290 million.

Commenting on the Egyptian-Emirati efforts thwarting the Turkish incursion into West Africa via the Senegalese gateway, Amani said, “Despite being two heavyweights in the region, both Egypt and the UAE are well aware of the dangers that are being hatched in the region. I think they will be able to ‘subdue’ Turkey’s ambitions but not eliminate them, especially since Ankara has large investments in Senegal and had managed to establish a strong presence in the country.”

Mona Omar, former adviser on Africa to the Egyptian Minister of Foreign Affairs, said Egypt fears the same scenario would play out once again in Senegal after Turkey has managed to establish a presence in Somalia, the East African gate, where Egypt has no physical presence. She said Egypt has neglected the West African region and has been focusing on the Nile Basin countries only during the past decades, which paved the way for Turkey to gain a foothold there.

On Sept. 30, 2017, Turkey inaugurated a military base in the south of the Somali capital of Mogadishu. The base includes three military schools along with other facilities and is seen as the largest Turkish military training camp outside of Turkey. Some 1,500 Somali soldiers receive military training at the Turkish base.

Omar believes that Erdogan does not view Senegal as a country with natural resources and wealth only, but also as a means to encircle its southern neighbor, Libya, where he seeks to protect his political and economic interests through his areas of influence in West Africa.

Turkey has been under international criticism for its support of the Government of National Accord, based in the west of Libya, in the face of the Libyan forces led by retired Libyan Gen. Khalifa Hifter in the east of the country.