The 35th African Union Summit was held in Addis Ababa to discuss peace and security issues in Africa, but the Grand Ethiopian Renassiance Dam was not on the agenda. 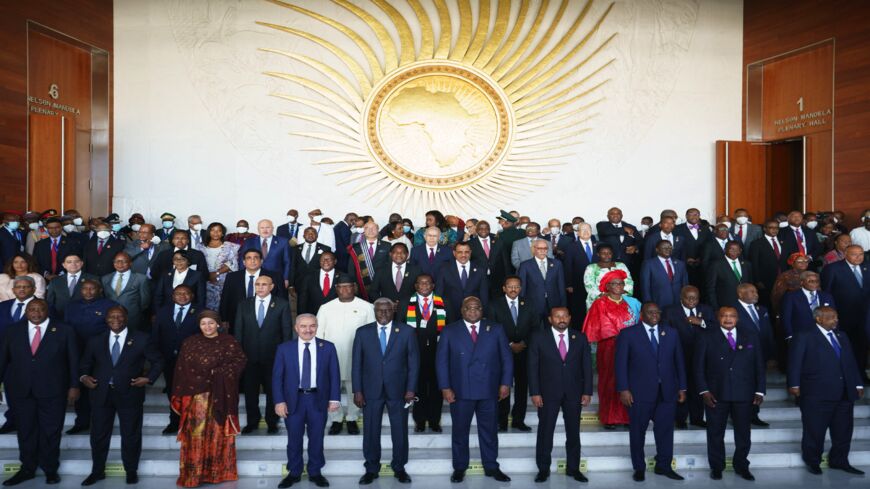 State heads pose during the 35th Session of the African Union Summit in Addis Ababa, Ethiopia, on Feb. 5, 2022. - AMANUEL SILESHI/AFP via Getty Images

CAIRO — Even as negotiations on the Grand Ethiopian Renaissance Dam (GERD) remain stalled, the 35th African Union (AU) Summit was held on Feb. 5-6 at AU headquarters in Addis Ababa. The summit did not tackle the GERD crisis, which has been strongly disputed between Cairo, Khartoum and Addis Ababa for more than a decade in Africa.

Heads of states and governments from the 55 AU member states participated in the summit’s meetings, including Egyptian Foreign Minister Sameh Shoukry.

The agenda of the summit focused on African peace and security-related issues and the repeated military coups in Africa. Four coups occurred within 10 months in the western part of the continent, including in Burkina Faso, Mali and Guinea, as well as a failed coup in Niger.

The agenda also included the repercussions of COVID-19, the member states’ positions on the decision to grant Israel official observer status at the AU, migration, poverty and economic integration.

Meanwhile, the AU summit unanimously voted to suspend the decision to grant Israel observer status in the pan-African organization. It also announced the formation of a committee of seven countries to examine this decision, including current AU chair Senegal, and Algeria, which strongly opposes this decision.

Commenting on why the GERD crisis was not discussed at the summit — even though it was held in Addis Ababa, which is a party to the crisis, and even though Cairo took part in the committee’s meetings — Mohamed al-Orabi, an Egyptian parliament member and a former foreign minister, told Al-Monitor that the 35th AU summit was not supposed to discuss the GERD issue and the dam crisis was not on the agenda.

Hence, Egypt was not expecting the GERD crisis to be discussed at the summit, he said, adding that the summit meetings are not the right place to discuss such a major crisis, which is a matter of life and death for both Egypt and Sudan.

Orabi added, “Cairo is counting on Senegal, in its capacity as AU president, to play a major role in bringing the GERD file to the dialogue and negotiations table, and to come up with a mechanism for an agreement that meets the demands of the three parties to the crisis. The AU summit is not concerned with discussing the GERD crisis and is not able to bring positive results in this file. Only general discussions of some general and outstanding issues related to Africa were held during the meetings at the summit.”

In his closing remarks at the AU summit, Senegalese President Macky Sall said that Africa will no longer accept military coups in some African countries and noted that the challenges facing the AU are related to peace, security, stability, combating terrorism and countering the military coups in Africa.

Orabi explained that the GERD issue is a priority for the AU chair, which is Senegal, in cooperation with other countries of major influence in the AU, such as Algeria, and they are both working to resume talks on the GERD.

He noted that the Ethiopian Foreign Ministry’s recent remarks that the Sudanese side is not dealing with the GERD file based on Khartoum’s interests but rather to the advantage of a third party (in reference to Egypt) is an Ethiopian attempt to divide the unified Cairo-Khartoum position that rejects Addis Ababa’s unilateral filling of the dam’s reservoir.

In a Feb. 12 televised statement, Sherif el-Gabaly, head of the Egyptian parliamentary African Affairs Committee, said the GERD issue will be resolved sooner or later, adding that Egypt is in good standing in Africa as the Egyptian policy is strongly oriented toward Africa.

In this context, Orabi said, “The Ethiopian side believes that dividing the Egyptian-Sudanese position is the first step toward progress in the GERD file. Yet the two countries are well aware of these malicious attempts that seek to drive a wedge between the two countries. These malicious attempts prove that Addis Ababa has no serious intention for progress to resume negotiations and reach a binding legal agreement that meets the aspirations of the three parties to the crisis.”

He added, “The Ethiopian side has been prevaricating and buying more time and has no intention to engage in serious talks. That is why we do not trust the Ethiopian side in reaching a binding agreement. This prevarication that has been going on for a decade has been the biggest obstacle to the success of any negotiation attempts or attempts to resume them.”

Salah Halima, former assistant foreign minister in Egypt, said that the GERD file was transferred to Senegal after the latter was handed the AU presidency and that regional and international efforts are currently being exerted to push forward the negotiation process.

Commenting on those meetings, Halima said the Emirati crown prince’s meetings come as part of international moves to push for the resumption of the GERD negotiations. He mentioned similar moves by Saudi Arabia, the United States and China.

Halima also condemned Ethiopia’s attempts to drive a wedge between Cairo and Khartoum, in reference to the Ethiopian Foreign Ministry’s statement on Sudan working to the advantage of a third party rather than for its own interests. He said such attempts are unsuccessful and will not lead to any progress because both countries are well aware of how dangerous Ethiopia’s unilateral actions on the GERD are.

Halima continued, “Egypt is counting on Senegal to play a pivotal role in resuming the GERD negotiations, particularly since Senegal had a similar experience [during a conflict] over the Senegal River Basin countries.”