Benjamin Netanyahu’s departure as prime minister of Israel is a loss of sorts for Erdogan when it comes to both domestic and regional politics. 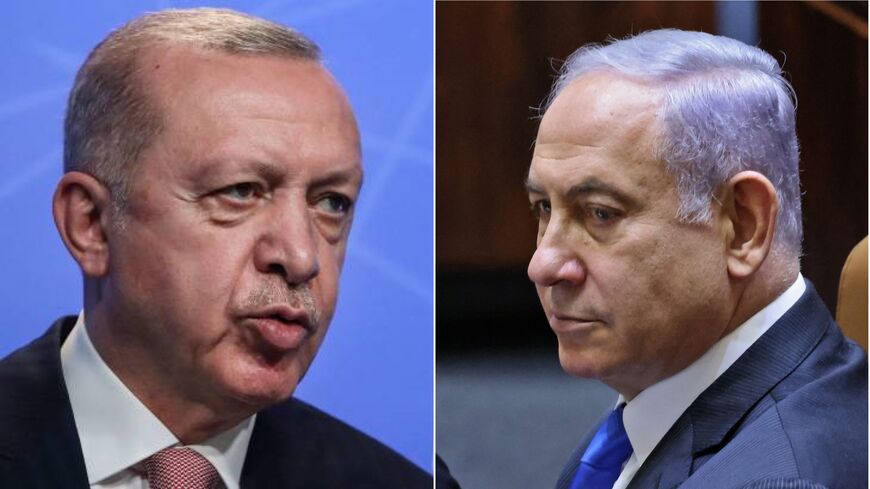 Turkish President Recep Tayyip Erdogan (L) speaks after the NATO summit at NATO headquarters in Brussels on June 14, 2021, while Israeli Prime Minister Benjamin Netanyahu attends a special session to vote on a new government that removed him from power, at the Knesset in Jerusalem, on June 13, 2021. - YVES HERMAN/POOL/AFP via Getty Images (L) / EMMANUEL DUNAND/AFP via Getty Images (R)

But a diplomatic source from Ankara, speaking on the condition of anonymity the day Bennett was sworn in, told Al-Monitor, “Erdogan will miss Netanyahu. They were enemies with a lot of benefits.”

This claim is counterintuitive and surprising, because whenever the two leaders made headlines when it came to each other in the last decade, they were usually furiously criticizing the other. Why then would Erdogan not be happy about Netanyahu’s departure? We can provide three reasons.

First, they strongly resemble each other in personas and in political discourse. They are strongmen who have long remained in power and do not want to let go of it. Indeed, opposition Good Party (Iyi Party) leader Meral Aksener said May 18, "Erdogan's Israeli version, Benjamin Netanyahu, did not hesitate to target the lives of civilians and children to stop his political rivals and protect his seat."

Erdogan, who had previously blasted Netanyahu for Israel's bombardment of Gaza, then lashed out at Aksener, saying she was out of line.

On May 20, Aksener came under verbal attack from a group in Rize, Erdogan’s home province; the confrontation caused her to cut her visit short. Erdogan said this was a “good lesson” for Aksener.

The same day, Erdogan’s lawyers filed a lawsuit against Aksener seeking 250,000 liras ($30,000) in damages for her comments likening him to Netanyahu.

But it can be argued that Erdogan's reactions show that Aksener was on target in her comparison of the two leaders. Aksener, Erdogan and their proxies angrily engaged each other over Netanyahu for weeks. This was just the latest example of how useful Netanyahu has become for Erdogan.

The diplomatic source said, “Both are democratically elected narcissistic leaders who would not bat an eye to do whatever it takes to hold power. For Erdogan it was as comforting to have Netanyahu in power as it was to have [US President Donald] Trump in D.C. They made Erdogan look better.”

The second explanation why Netanyahu's departure may not be beneficial for Ankara is centered around the fact that Netanyahu was a well-rounded enemy on multiple fronts.

Servet Akman, a former diplomat and a fellow with the Institute for Diplomacy and Economy, told Al-Monitor, “Erdogan and Netanyahu have never had the chance to be on good terms with one another. The two leaders have exchanged harsh accusations against one another in the past and never met in person even after the normalization of relations in June 2016. It is telling that the normalization deal was announced in two different cities by Netanyahu and then PM Binali Yildirim. The two leaders never had a phone call following the normalization and Erdogan’s call with Israeli President Reuben Rivlin was strongly criticized by Netanyahu.”

For domestic consumption, Erdogan, his subordinates and his family members regularly used Netanyahu as a punching bag. Netanyahu and his family would reply in kind, giving Erdogan ample opportunities to lash out again and silence opposition. The Palestinian issue has overwhelming support in Turkey and Israel bashing always pays off. And Netanyahu bashing had extra benefits.

In March 2019, when Netanyahu’s son Yair used the word Constantinople, Erdogan told Netanyahu to pinch his son’s ear. Erdogan savored each moment to rally his base, and aiming at Netanyahu was a direct and unifying way to do so.

A month after Erdogan’s blast against Yair and Benjamin Netanyahu, Erdogan's youngest son, Bilal Erdogan, criticized Israel for attacking Palestinians. He also claimed Israel was afraid of Turkey because the country was governed by graduates of Islamic high schools, known as imam hatip schools.

Selin Nasi, Ankara Policy Center London Representative, told Al-Monitor, “Anyone familiar with Turkish-Israeli relations in the last decade knows too well that there was no love lost between the leaders of these two countries. Both have sought to use foreign policy issues to mobilize their constituencies when they saw fit, and this has not fostered better bilateral relations.”

Nasi did not agree that Erdogan would miss Netanyahu. However, she cautioned, “Bennett might spell more trouble for bilateral relations. Unlike Netanyahu, who has been and still is a pragmatic and pro-status quo leader — read as favoring no solution to the Israeli-Palestinian conflict — Bennett advocates annexation, refuses a two-state solution based on the pre-1967 lines.”

Bennett and possible new leaders of Israel are likely to be less pragmatic and less caring about Ankara and Erdogan’s seemingly incurable anti-Semitism. In the last decade, Israel has expanded its foreign policy options, while Ankara has been sidelined on multiple fronts.

The third reason Erdogan might miss Netanyahu is that while the Israeli leader represented an old foe, he was one who still took Erdogan seriously. A senior bureaucrat in Ankara told Al-Monitor that over the years, “King Bibi and Sultan Erdogan had established their own way of communications and back track channels. Now most of these will become obsolete. It is not just that the devil you know is better than the unknown for Erdogan, he had a tacit understanding with Netanyahu.” Other senior bureacrats echoed these remarks.

The last example of this tacit agreement was in July 2020 when a conflict erupted that led to war over the  Nagorno-Karabakh enclave. Ankara was outspoken and full force behind Azerbaijan against its foe Armenia. Israel also provided regular and extensive arms transfers to Azerbaijan, but did so rather quietly. Azerbaijan is a strategic and profitable ally for both Israel and Turkey, and it serves their parallel interest in containing Iran simultaneously. Netanyahu’s pragmatism and the tacit understanding established between Ankara and Tel Aviv made sure the mutual support to Azerbaijan moved smoothly.

Louis Fishman, a historian at Brooklyn College, told Al-Monitor, “Erdogan and Netanyahu created a dynamic where despite the usual bickering between them the relations between the two countries remained on track, with trade continuing unhindered and even growing at times. However, Israel has retained the upper hand, almost writing Turkey off as a serious partner and preferring to keep its relations at a minimum.”

Fishman said, “Israel recognizes the fact that Turkey's investments in Jerusalem, West Bank, and Gaza, together with its successes in creating a pro-Turkish playing field among Palestinians, is greatly contingent on its relations with Israel. Thus, Turkey also is aware that beyond the regular bickering, it needs to remain within the confines of the status quo and that pushing Israel too far can hinder its close ties with Palestinians.”

There are multiple instances in the last decade where Erdogan's arguments about Israel oscillated. In 2018, he went on the record to argue that Israel and Turkey should accept they need each other.

Soli Ozel, a lecturer at Kadir Has University in Istanbul, told Al-Monitor, “I think that by now the relations between Ankara and Tel Aviv no longer depend on personalities as far as Israel is concerned.” And Ankara seems to be quite aware of this. The departure of Netanyahu means relations will have to work through proper state channels if both sides are willing. That is not Erdogan’s preferred method of conducting foreign policy as it diminishes his value domestically.

“There is a debate in Israel about Turkey and how to treat Turkey. My understanding is that opinions are divided. The need for having Turkey by Israel’s side is no longer as strong in my view and the depth of mistrust towards Erdogan is formidable,” Ozel said.

None of the experts and bureaucrats Al-Monitor spoke expect a normalization between the two countries anytime soon.