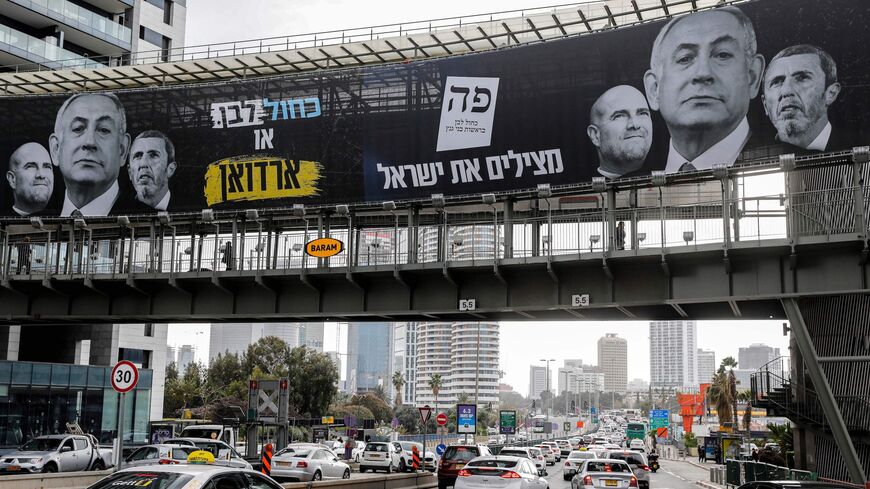 "I congratulate you on your victory in the elections and believe that the new government will continue the cooperation between the countries in all fields, in a way that will bring peace and stability to our region," Erdogan wrote, according to a statement from Netanyahu's spokesman Thursday.

The move comes after both Erdogan and Foreign Minister Mevlut Cavusoglu signaled that Turkey is ready to maintain relations with Israel’s incoming government provided that the Palestinians' rights and Jerusalem's status are respected. Yet experts express caution over the future of bilateral ties in the aftermath of the Israeli elections.

Cavusoglu, speaking at the parliament for his ministry’s annual budget, pointed out that Turkey and Israel had already restored full diplomatic ties by naming ambassadors and realized high-level visits. “The rights of our Palestinian brothers and the status of Jerusalem are important factors within this relationship. We are ready to advance the normalization process with the new government based on these factors,” Cavusoglu said.

Cavusoglu’s speech echoed the words of President Recep Tayyip Erdogan last week following the Israeli elections that brought Likud leader Benjamin Netanyahu back to power in one of the furthest-right coalitions in Israel’s history. Erdogan said he wanted to maintain Turkey's relations with Israel based on “mutual respect for sensitivities and common interests” regardless of the election outcome. He made no specific reference to Netanyahu, with whom he had often engaged in public name-calling throughout the late 2010s.

Namik Tan, Turkey’s former ambassador to Tel Aviv and Washington, called Erdogan’s words “clearly an olive branch extended to Netanyahu.” He went on, “Turkey has strived hard to normalize its relationship with Israel and, with various agreements signed and ambassadors named on both sides, the normalization is now institutionalized. I am confident that the two leaders — both politically savvy pragmatists — will carefully refrain from any backtracking on normalization.”

Ankara, like many capitals, has adopted a wait-and-see attitude as Netanyahu began his meetings with the leaders of the parties that make up his right-wing and religious parliamentary bloc. Unlike US President Joe Biden, Ukrainian President Volodymyr Zelenskyy and French President Emmanuel Macron, who called Netanyahu after his electoral victory, Erdogan has not so far called Netanyahu. Diplomatic sources say that any call between the two leaders is more likely to be made after the new government is formed.

“It is important to see who will be in the new government and occupy what posts,” a diplomatic source in Ankara told Al-Monitor. The source said that Netanyahu’s return to power was “neither a surprise” nor meant “an end to the normalization process.”

Academics and politicians maintain that the new Israeli government will increase risks to the fragile ties, only recently back on track after nearly a decade of tensions. “We are happy with the improvement of relations between Turkey and Israel, and we hope that the results of the elections in Israel will not deliver a blow to it,” said Unal Cevikoz, the deputy chair of the main opposition Republican People’s Party and a former diplomat. “It appears, however, that Netanyahu’s return to power will create complications in ties.”

Turkey and Israel, once historical partners, inched toward normalization last year, with Erdogan talking on the phone first with Israeli President Isaac Herzog and then with then-Prime Minister Naftali Bennet. The rapprochement accelerated with a visit by Herzog in March — the first presidential visit in 15 years — when the two sides hailed a new era.

“The visit of Benny Gantz, the Israeli defense minister and the leader of the Blue and White Party, five days before the election is also significant. Gantz is an important figure of the Israeli establishment,” Tan told Al-Monitor, saying that the visit aimed to cement certain aspects of the ties ahead of the polls.

Both Turkish and Israeli officials who worked on normalization maintain that they aim to reconstruct ties that will enable the two capitals to handle tensions “quietly and constructively.” Lillian said that the sides were working on launching a high-level committee that would defuse tensions before they blow up into crises that end with the sides recalling their envoys.

“In the last two decades, Israel has been a post that prevented ambassadors from getting too comfortable in their seats,” Cagri Erhan, the president of Istanbul-based Altinbas University, told Al-Monitor. Kerim Uras, ambassador-designate to Israel in 2010, could not start his job due to the Gaza flotilla crisis. Kemal Okem, named ambassador to Israel as the sides attempted a reconciliation in 2016, returned home after Israeli forces killed 60 Palestinians during protests on the Gaza border amid the opening of the US Embassy in Jerusalem in May 2018.

The crises were further fueled by Erdogan and Netanyahu’s verbal battles on Twitter. “Want a lesson in humanity? Read the 10 commandments,” Erdogan tweeted after Netanyahu accused him of being Hamas’ biggest supporter. A year later, when Erdogan called Netanyahu “the thief who heads Israel” during a campaign rally, Netanyahu retorted by portraying Erdogan as “a dictator who jails thousands of journalists” and “a joke.”

“Netanyahu’s return to power poses a serious risk to normalization,” Erhan told Al-Monitor, attributing the risk less to “bad chemistry” between the leaders and more to Netanyahu’s policies toward the Palestinians at home and his role as the architect of the anti-Turkey bloc in the eastern Mediterranean. “Add to this equation his alliance with the anti-Palestinian politicians, and normalization looks very much on a razor’s edge. Ideally, the two sides will keep the momentum going through trade, tourism, academic cooperation and intelligence. Still, I cannot quite picture the presidential visit [Erdogan has said he would like to make] to Israel anytime soon. Nor do I see any breakthrough in energy cooperation.”

Other experts are inclined to give Netanyahu’s new term the benefit of the doubt, particularly given that Netanyahu never invoked Turkey in his election campaign nor attacked the Lapid government for the normalization.

“Turkey and Israeli ties experienced both the best and the worst under Netanyahu,” said Gokhan Cinkara, a lecturer at the Konya-based Necmettin Erbakan University. Cinkara pointed out that it was Netanyahu who said that Israeli security forces were “doing their job” when they shot at a group of Turkish activists who tried to break the blockade on Gaza and then three years later, surprised many by publicly apologizing to Turkey for the loss of lives.

“Netanyahu is a politician who knows Turkey well, and it would be a mistake to assume his term would mean a return to 2018 and 2019,” Cinkara told Al-Monitor. “We are looking at a different stack of cards, not regarding his relations with Turkey but with his Arab neighbors. All countries are also waiting to see who will be in the coalition.”

The demand of Itamar Ben-Gvir of the far-right Religious Zionism-Otzma Yehudit alliance for the post of public security minister is alarming to Palestinians, Israel’s Arab allies and Turkey. “A terrorist at the head of public security” read a headline from the pro-government and accused antisemitic Turkish newspaper Yeni Safak.

A public survey carried out by Turkiye Raporu, an Istanbul-based pollster, said that 65% of Turks did not support the improvement of ties with Israel. In the survey carried out in October among 2,000 people, 34% said that they did not back the normalization of ties because they considered it a betrayal of the Palestinian cause and 31% said that they did not back it but considered it a necessity for foreign relations. Only 17% said they supported normalization.

Editor's note: Nov. 11, 2022. This article has been updated since first publication to include Erdogan's message to Netanyahu.