As Ankara's relations with Israel warm, Hamas is carefully maintaining its presence in Turkey. 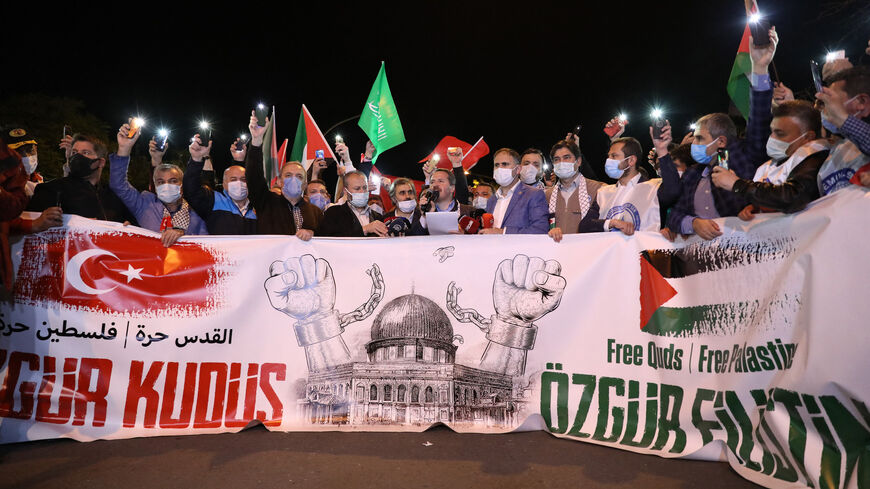 Protesters hold Palestine and Turkish national flags and chant slogans during a demonstration outside the Israeli Consulate in Istanbul on May 10, 2021. - ADEM ALTAN/AFP via Getty Images

Israeli Prime Minister Yair Lapid announced Aug. 17 that Israel and Turkey will restore full diplomatic relations and reappoint ambassadors for the first time since 2018. That year, Turkey withdrew its ambassador to Israel after the latter killed dozens of Palestinians during the so-called return marches that started in the Gaza Strip on March 30, marking Land Day.

Following a phone call with Turkish President Recep Tayyip Erdogan, Lapir tweeted Aug. 17, “The resumption of diplomatic relations with Turkey is an important factor for regional stability and major economic news for Israeli citizens and we will continue to work to strengthen Israel’s position in the world.”

At a press conference in Ankara on the same day, Turkish Foreign Minister Mevlut Cavusoglu said, “The decision to exchange ambassadors between Turkey and Israel came within the framework of a joint decision on resuming diplomatic relations between the two sides to the highest levels.”

He stressed that reappointing ambassadors in Turkey and Israel was important for the development of bilateral relations, adding, “We will continue to defend the rights of Palestine, Jerusalem and Gaza, and it is important that our diplomatic messages be transmitted directly to Tel Aviv through the Turkish ambassador to Israel, who will be named at a future stage.”

In an Aug. 23 interview with Turkish broadcaster Haber Global, Cavusoglu said, “Resuming full diplomatic relations with Israel does not mean that Turkey will change its policies in the Middle East.”

“Palestinian Authority President Mahmoud Abbas and Hamas welcome the normalization of diplomatic relations between Turkey and Israel. Therefore, we will better defend the Palestinian cause, and this should not mean that Turkey will make concessions on the Palestinian issue,” he added.

In its own statement on the same day, Hamas denied endorsing normalization between Israel and Turkey. It read, “We repeat our square rejection of all forms of normalization that contradict our national principles and the interest of the Palestinian people, Arab and Islamic peoples.”

During the period leading up to rapprochement between Ankara and Tel Aviv following the visit of Israeli President Isaac Herzog to Ankara on March 8, Turkey asked dozens of Hamas activists to leave Turkish territory and prevented others from entering, Israel Hayom reported April 26. The Israeli daily quoted an unidentified Palestinian source as saying, “The change in Turkish policy comes as a result of great pressure on Ankara on the economic level, amid the deteriorating Turkish economy and the collapse of the national currency, which caused prices to hike and purchasing power to decline.”

The article went on, “This has prompted Turkey to change its position in its international and regional relations, which may affect the presence of Hamas in Turkey.”

On Aug. 27, the Hebrew Makan channel quoted Irit Lillian, Israel's charge d'affaires in Ankara, as saying that the biggest obstacle hindering the development of Turkish-Israeli relations is Hamas' office in Istanbul.

She added, “Hamas is a terrorist organization. It is no secret that Israel expects Turkey to close this office and expel the activists from its territories.”

Back in 2018, Erdogan described Israel as “a terrorist state.” However, in the recent Israeli shelling on the Gaza Strip from Aug. 5 through Aug. 7 that killed 49 Palestinians and during which Hamas stayed on the sidelines, Turkey played a mediating role in reaching a cease-fire.

On Aug. 18, Hamas revealed that the movement’s political chief Ismail Haniyeh held a phone call with Cavusoglu on Aug. 8. According to Hamas’ statement, Cavusoglu stressed that the “Palestinian issue is a priority for Turkey, which stands firmly and permanently with the Palestinian people and their rights, especially in Jerusalem.”

In an interview with Al-Monitor, Hamas spokesperson Hazem Qassem denied that Turkey had requested Hamas members to leave its territory. He stressed that Hamas members are still present in several countries including Turkey and that Hamas will not change its positions against any form of normalization with Israel, which would greatly undermine the Palestinian cause and “encourage the Israeli occupation to escalate its crimes against the Palestinian people.”

Ibrahim al-Madhoun, a Turkey-based political analyst close to Hamas and director of the Istanbul-based FIMED Media Foundation, told Al-Monitor, “It is too early to talk about the impact of normalized relations between Israel and Turkey on Hamas.”

He added that Turkey is very capable of balancing its foreign relations. “In fact, on Aug. 23, Erdogan received Abbas, which indicates that Ankara is able to manage its foreign affairs in a manner that preserves its interests,” Madhoun explained that any news about tightened Turkish measures against Hamas members residing in Turkey is mere rumors spread by Israel to pressure the movement in Turkey.

Wissam Afifa, a writer and political analyst from Gaza, told Al-Monitor, “There is a consensus between Turkey and Hamas regarding the latter’s activity in Turkish territories, which is limited to political work in support of the Palestinian cause and not the military aspect.” He added, “This places Turkey in an embarrassing position that could prompt it to take measures against Hamas following the normalization of ties with Israel.”

Afifa explained that Turkey is not part of the axis of resistance, which includes Iran, the Syrian regime and Lebanon’s Hezbollah.

He believes that Ankara might try to reduce Hamas’ presence on its territory but “will not go as far as to sacrifice its relations with Hamas — the largest Palestinian resistance movement — which has been a major player on the Palestinian arena since its overwhelming victory in the 2006 parliamentary elections.”

He added that Hamas’ allies in the region have different roles. “While Iran is clearly supporting Hamas militarily, Turkey provides political support and relief funding. Meanwhile, Qatar handles both financial and political support through its grants. This diversity will help protect Hamas’ presence abroad,” Afifa said.

Mukhaimer Abu Saada, a professor of political science at Al-Azhar University in Gaza, told Al-Monitor, “Normalizing relations between Israel and Turkey will have both a positive and a negative impact on Hamas at the same time. On the positive side, Turkey will be able to take on the role of mediator between the two parties.”

Abu Saada added, “But on the other hand, the leaders of Hamas’ military wing will no longer be welcome in Turkey, as we saw on April 26 when Turkey requested the movement’s members leave its territory.”

He said, “Hamas’ political leadership is present in Qatar. This means normalizing relations between Turkey and Israel will not affect Hamas’ presence abroad.”