Turkey has asked some Hamas members to leave Turkey and prevented others from entering the country. 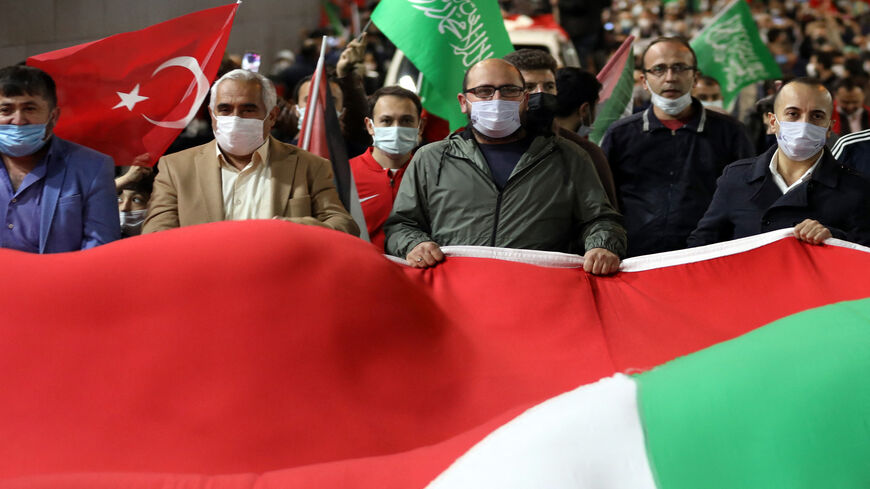 People demonstrate outside the Israeli Consulate against Israel's airstrikes launched on the Gaza Strip, killing at least 20 people, Istanbul, Turkey, May 10, 2021. - Adem Altan/AFP via Getty Images

Israel’s Israel Hayom daily reported April 26 that in February and March Turkey has requested dozens of Hamas activists to leave its territories, while preventing others from entering the country. The alleged request coincides with the rapprochement between Ankara and Tel Aviv.

The newspaper quoted an unnamed Palestinian source as saying, “The change in Turkish policy appears to be the result of great pressure on Ankara at the economic level, amid the faltering Turkish economy and the collapse of the national currency, which caused prices to soar and Turkish purchasing power to tank. This prompted Ankara to shift positions in international and regional relations, which may affect Hamas’ presence in Turkey."

The report added that it was too early to state that there is a crisis in the relations between Turkey and Hamas, as tension exists but Hamas leaders are wary of efforts to shun Erdogan who, on April 17, condemned Israel's recent practices in Jerusalem.

Meanwhile, Hamas showed restraint amid the Turkish-Israeli rapprochement. The Islamic movement contented itself with criticizing Herzog's visit to Turkey on March 8. It, however, did not mention Turkey or Erdogan, and called in a March 9 press statement for “not providing the Zionist entity the opportunity to infiltrate the Arab and Islamic region and tamper with the interests of the Arab and Islamic peoples.”

In the wake of the Tel Aviv operation March 30, during which Palestinian gunmen killed five people, Hamas spokesman Hazem Qassem criticized in an April 8 interview with Al-Mayadeen 8 the Turkish Embassy in Tel Aviv over its condemnation of the attack.

Qassem’s criticism comes within the framework of Hamas’ response to Turkey’s expulsion of its members from its territory during the past two months, according to the Israel Hayom April 26 report.

Relations between Turkey and Hamas have greatly improved since the latter achieved a landslide victory in the 2006 Palestinian legislative elections.

The shared Islamic reference and ideology (Muslim Brotherhood) of Hamas and the ruling Justice and Development Party headed by Erdogan have helped further consolidate these relations after the latter ascended to the presidency in 2002.

Meanwhile, the Israeli attack on the Gaza aid flotilla in 2010 caused tension in Turkish-Israeli relations, causing popular and official uproar against Israel, and further consolidated ties with Hamas.

Turkey received a group of Hamas prisoners who were released as part of the Shalit prisoner exchange and who were deported to Turkey in the fall of 2011, most prominently deputy head of Hamas’ political bureau, Saleh al-Arouri.

Ankara granted them Turkish passports in a bid to facilitate their movement, which was an indication of the positive development of relations between the two sides.

Mustafa al-Sawaf, Gaza-based political writer close to Hamas, told Al-Monitor that it was “unlikely for Turkey to ask Hamas members to leave its territories based on a request from Israel, because Turkey is a sovereign country that does not allow Israel to interfere in its sovereign decisions.”

He said, “Turkey might take certain measures to prevent any Hamas activities that could be considered by Israel as military actions. But Hamas understood Turkey’s position [when it comes to rapprochement], not to mention that it was one of the first countries that recognized Israel on March 28, 1949."

Sawaf added, “Turkey will also prevent Hamas from inciting against Israel in its affiliated media outlets working inside Turkish territories, which may be a move within the framework of the Israeli-Turkish rapprochement aimed at boosting the faltering Turkish economy."

Riad al-Ayla, professor of political science at Al-Azhar University in Gaza, told Al-Monitor, “Hamas understands the warm relations between Erdogan and Israel, which comes in the framework of efforts to boost the Turkish economy that has been struggling and the collapse of the Turkish lira.”

He said, “Turkish-Israeli relations will not affect Erdogan’s ties with Hamas as they share the same Islamic reference — that of the Muslim Brotherhood."

Ayla believes that Hamas will not repeat the mistakes of the past, referring to when the movement antagonized the Syrian government by supporting the Syrian revolution, which prompted Syrian President Bashar al-Assad to close Hamas’ offices in Damascus on Nov. 7, 2011.

“Turkey is an important country in the region; it plays a significant role for Hamas alongside Iran. Therefore, it will not allow its rapprochement with Israel to be a reason for rupture,” he noted.

He expects that Malaysia would be the alternative to Hamas, in the event of restricting the movement and forcing it to leave Turkish territory.

“Malaysia is an important arena for Hamas' political and economic work. It is impossible for Qatar to be the alternative, because Qatar is not an arena for political and financial investment for Hamas,” he concluded.