Many within Hamas are quietly disappointed that Islamist ally Prime Minister Recep Tayyip Erdogan may be pursuing reconciliation with Israel. 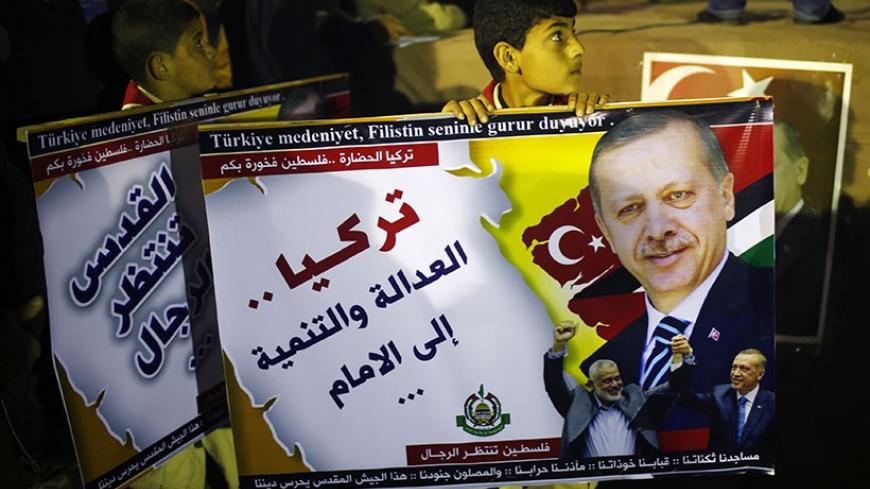 Hamas has remained silent about the possibility of a rapprochement between Israel and Turkey, but within the movement, mixed views remain.

“[Hamas] does not want to interfere in the Internal affairs of an ally country like Turkey,” a Hamas official told Al-Monitor. This official was slightly more optimistic than some of his peers, expressing hope that a possible Turkish-Israeli rapprochement would lift the blockade on Gaza and reduce the restrictions imposed on the entry of supplies. Hamas is largely confident it will not be the victim of any rapprochement between Turkey and Israel, and that Israel will not be able to impose a rupture of links with Hamas on Turkey.

This view is in line with the widespread impression among Hamas that relations with Turkey are governed by Ankara’s domestic and international calculations, and reflects its national interests. Also, the support for the Palestinian cause on the political and humanitarian levels stems from a wide spectrum of Turks, even if Prime Minister Recep Tayyip Erdogan backs Hamas only due to the Islamist background of his Justice and Development Party (AKP).

Hamas seems reassured that any rapprochement between Turkey and Israel will not be concluded at the expense of Erdogan’s stand toward Gaza, because this stand provides him with a portal to the Arab region and helps him play a key role in the surrounding regional environment. Erdogan may avoid explicit support for Hamas for fear of getting into a confrontation with the United States and Israel.

Turkish Deputy Prime Minister Bulent Arinc revealed in the beginning of May that Erdogan intends to visit Gaza in the near future, which reassures Hamas to a large extent. Hamas did not comment on the announcement of the visit, since previous dates for a visit were set but never materialized. One Hamas official wondered to Al-Monitor how Erdogan intends to reach Gaza.

“Amid the rupture in relations between Turkey and Egypt over the stance of the former toward the coup, the visit of Erdogan to Gaza will not take place through the Rafah crossing. Will he then use the Erez crossing, located north of Gaza, within the consent of Israel to mitigate the disappointment of Hamas vis-a-vis the reconciliation?”

Turkey has in the past few weeks held a number of pro-Palestinian events, helping assuage the concerns of Hamas about the expected Israeli rapprochement. On May 9, a large number of Arab and Turkish sympathizers participated in a solidarity vigil with Palestinian prisoners in Istanbul, attended mainly by exiled Hamas detainees including Husam Badran and Mussa Akkari.

On April 23-24, Istanbul hosted a conference titled Palestine International Forum for Media and Communication, with the participation of 400 writers and journalists, including prominent Arab journalists and sympathizers of Hamas such as Abdel Bari Atwan and Azzam Tamimi (both living in Britain), Mohammad al-Musfir from Qatar and Fahmi Huwaidi from Egypt.

A Turkish official who works on the Hamas file told Al-Monitor during a phone interview that Hamas can gain from an improvement in Ankara’s ties with Israel. “Despite the concerns surrounding the Turkish-Israeli reconciliation, [this] can benefit Hamas on many levels, including the mitigation of any Israeli military escalation, in addition to the efforts Turkey is exerting to open communication channels through its European relations to remove the movement from terrorism lists,” the Turkish official said, revealing that Hamas officials met with Western diplomats in Ankara and Istanbul.

Given the desire of Hamas to yield small gains from a possible Turkish-Israeli rapprochement, it is expected that the movement will present a proposal to Turkish authorities to build a waterway link between Gaza and the outside world. This proposal was made by the Euro-Mid Observer for Human Rights as a result of the exacerbation of the Gaza crisis and the closure of commercial crossings. Hamas can push to pass and implement this proposal if relations between Turkey and Israel are enhanced.

Despite some advantages, circles in Hamas do not hide their disappointment regarding Israeli reconciliation with Turkey, since they consider Erdogan to be an ideological ally. The organizational bases of Hamas previously relayed their impressions to Al-Monitor, describing Erdogan as “the Caliph of Islam, the ruler who delivered Israel a blow and the one who took vengeance for the killing of Muslims in Syria and Egypt.” To them, normalizing relations with Israel is not in line with these religious descriptions. This would reduce Erdogan’s status as a Muslim leader to a mere political ruler who puts the interests of his people first, as noted by another Hamas official.

The disappointment from an Islamist ally has reinforced the impression upon Hamas that it needs to focus on solidifying its Palestinian national credentials, as witnessed in the latest reconciliation with Fatah, and move away from its regional ideological links.

“By reconciling with Israel, Erdogan depicts himself as a leader of the Turkish people and not of the Islamic nation, and as a protector of the interests of the people who voted for him within the borders of his country, and not of the Palestinians who loved him. The reconciliation, however, will favor the growing inclination among Hamas toward having the national dimension and partisan interests prevail over ideological, religious concepts in its political relations,” said the Hamas official, who has been in contact with Turkey.

Hamas is concerned whether a potential Turkish-Israeli rapprochement narrows the group's regional horizon after its breakdown of relations with Egypt, Iran and Syria. “The decision-making corridors in the movement have raised this question in the past weeks. There are concerns about the communication between Turkey and Israel imposing more restrictions on Hamas’ regional relations, although we are confident Erdogan will not sell us out,” the Hamas official told Al-Monitor.

The most accurate analysis of the impacts of a possible revival in Turkish-Israeli ties on Hamas was mentioned in a Hamas internal document, which Al-Monitor was able to secure: “It is not expected under the current circumstances for Turkish-Israeli relations to reach normalization, and Turkey will continue with its policy of calculated support for Hamas and its demands to lift the blockade on Gaza. Hamas, however, is not in a position that allows it to impose its wishes or requirements on other parties. [Hamas] has to deal wisely with the Turkish-Israeli reconciliation so as not to find itself standing alone.”