Will Israeli-Turkish relations leave Hamas in the cold?

It remains unclear how Hamas-Turkish ties will be affected by the move by Turkey and Israel toward a resumption of full diplomatic relations. 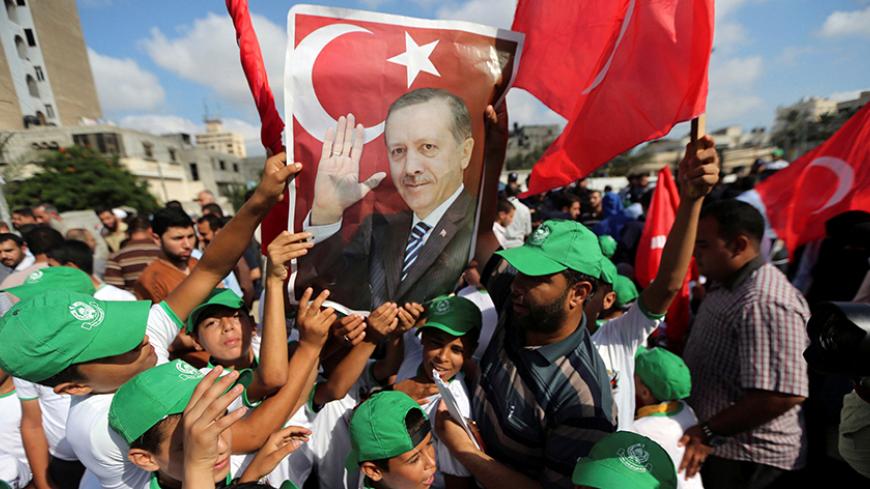 Turkey and Israel appointed ambassadors Nov. 15 as part of a normalization of ties. Israel appointed Eitan Na'eh as ambassador to Turkey, while Kemal Okem was named Turkey's ambassador to Israel. The two countries agreed on June 28 to resume relations after a six-year rupture sparked by an Israeli assault on the Mavi Marmara, a Turkish ship carrying humanitarian aid to Gaza, on May 31, 2010. It seems certain that their agreement to resume relations will affect Hamas' ties with Ankara.

Khaled Meshaal, head of Hamas' political bureau, had visited Ankara on June 24, three days before Turkey and Israel announced their reconciliation. On the day the Turkish-Israeli agreement was made public, Hamas issued a statement expressing its gratitude to Turkish President Recep Tayyip Erdogan for his support to Gaza and for official and popular Turkish efforts to aid Palestinians in Gaza and ease the siege against them. Hamas also said that it looked forward to Turkey's continued support of the Palestinian cause.

Husam Badran, the Qatar-based official spokesman for Hamas, told Al-Monitor, “Hamas-Turkish ties are solid, built on a strong foundation. They depend on Turkish official and popular support for the Palestinian cause. Palestine has a special intellectual and historic prestige in the eyes of the Turks, thus Hamas-Turkish ties will not be negatively affected by Turkey's foreign relations with various parties. Although Hamas, first, believes that the normalization of ties with the Israeli occupier does not serve the interest of our people, Turkish policy considers the lifting of the siege on Gaza a priority for which great efforts are being made.”

Yossi Melman, a security expert with ties to the Israeli security establishment, said on Nov. 5 that Israel had expressed its disappointment to Ankara that members of Hamas continued to operate in Turkey, although Israel had asked that they be expelled and their offices closed.

Said el-Haj, a Palestinian researcher in Turkish affairs based in Istanbul, told Al-Monitor, “Hamas-Turkish ties have always been non-strategic and have not included any financial or military support, neither before nor after the Israeli-Turkish deal. They differ from Hamas' previous ties with Iran or current ties with Qatar. The Turkish support for Hamas has been limited to the political [and in the] media. … Thus, their ties will not be affected much by the exchange of ambassadors or despite the tacit Hamas-Turkish understanding to expel from [Turkish] territory some Hamas leaders, such as Saleh Aruri, a member of Hamas’ political bureau. This understanding remained out of the media and preceded the Turkish-Israeli deal.”

Haj, who has contacts in Ankara’s decision-making circles, added that a resumption of Iranian support as an alternative to Ankara is not an option for Hamas, noting, “Hamas-Iranian ties are not at their best.” He added, “This is due to Iran’s deteriorating reputation among Hamas' popular base given its negative role in the wars in Syria, Iraq and Yemen. Also, Iran is not eager to restore ties with Hamas as before, although it has communicated with Hamas’ second- and third-tier leaderships. Iran can dispense with Hamas following its expansion in the region.”

One potential cause of concern for Hamas in terms of the Turkish-Israeli rapprochement is if the two states improve relations beyond the mere exchange of ambassadors and move toward closer ties. Israel's Channel 2 had an exclusive interview with Erdogan Nov. 20, and the day before, a Knesset delegation met in Istanbul with Turkish Foreign Minister Mevlut Cavusoglu and parliamentarians from the ruling Justice and Development Party (AKP) to discuss possible cooperation. The Israelis were also in Istanbul to take part in events related to the NATO Parliamentary Assembly's annual session. Earlier, on Oct. 13, Energy Minister Yuval Steinitz became the first Israeli Cabinet member since the rapprochement to visit Turkey, where he met with his counterpart, Berat Albayrak, an Erdogan son-in-law.

An AKP leader who spoke to Al-Monitor on condition of anonymity said, “The Turkish-Israeli rapprochement will have no negative impact on Hamas-Turkish ties. Ankara does not mix its foreign ties. Having ties with Israel does not mean that relations with Hamas should be cut or vice versa. The outcome of any Turkish-Israeli rapprochement [on the Palestinians] will be evident in [subsequent] Turkish support for the Palestinians.”

Former Mossad director Efraim Halevy told Yedioth Ahronoth on June 30 that Hamas stood to benefit from the Turkish-Israeli agreement because it would open the door to easing the blockade on Gaza, allow the entry of goods and construction materials to build a power plant and hospital, and raise the standard of living in Gaza.

Ahmed Youssef, former political adviser to Ismail Haniyeh, deputy head of Hamas' political bureau, and who has good channels of communication with the AKP, told Al-Monitor, “The exchange of ambassadors between Ankara and Tel Aviv is an internal Turkish affair, and we do not interfere in other countries' internal affairs. This is although such a move could result in providing Gaza with Turkish humanitarian aid. Also, the close Hamas-Turkish ties cannot be negatively affected by the Turkish-Israeli rapprochement. As for Hamas-Iranian ties, they are complicated given the complexities of the Syrian dossier. The restoration of Hamas-Iranian ties depends on a solution to the Syrian crisis and is not connected to the Turkish-Israeli rapprochement.”

Hamas' regional and international relations are not strong enough to allow it to take an assertive position opposing the Turkish-Israeli rapprochement, a move that in any regard would risk angering its closest ally, Erdogan, who has preserved close ties with Hamas leaders. At the same time, Hamas is hoping for some sort of breakthrough subsequent to the resumption of full relations between Turkey and Israel, in part to avoid embarrassment in the eyes of Palestinians and Arabs for having an ally that pursues ties with what it calls the “Israeli enemy.”