As Hamas absorbs the aftermath of the Turkish-Israeli agreement, some wonder whether Turkey should be blamed for failing to lift the siege on Gaza. 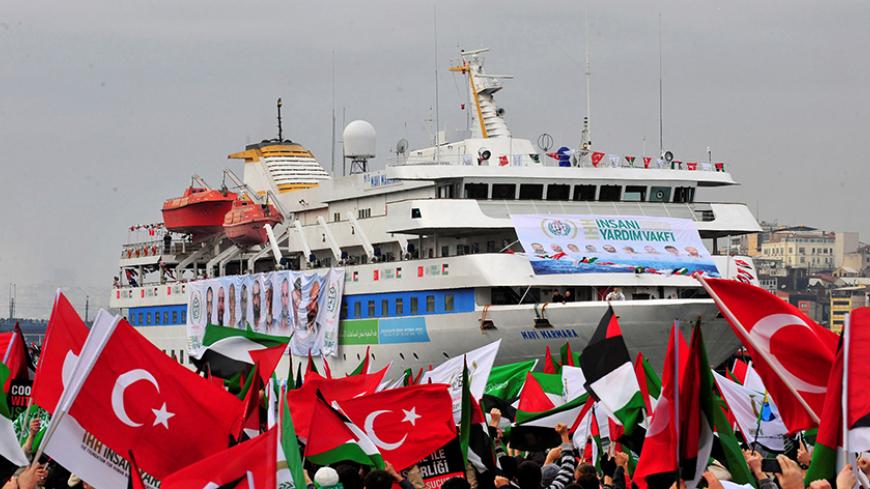 Pro-Palestinian activists wave Turkish and Palestinian flags during the welcoming ceremony for the Mavi Marmara at the Sarayburnu port of Istanbul, Dec. 26, 2010. - REUTERS

On June 27, Israel and Turkey declared they reached an agreement to normalize relations. The declaration did not have a positive ring at the Hamas grass-roots level, as the agreement did not stipulate the complete lifting of the Gaza blockade. However, Turkey will be allowed to deliver a 10,000-ton shipment of humanitarian aid, build a 200-bed hospital and establish a new power station and a desalination plant for drinking water.

The agreement came six years after the two countries broke off ties following the Mavi Marmara incident, when Israeli naval forces seized the ship on May 31, 2010, killing nine Turkish people onboard. Since then, Hamas and Turkey had strengthened their ties, and Turkey demanded an end to the siege imposed on Gaza after Hamas won the 2006 legislative elections.

“Hamas believes that under the Turkish-Israeli agreement, Turkey achieved as much as it can to ease the blockade on Gaza, which has been plagued by economic crises," Ahmed Youssef, a former political adviser to Ismail Haniyeh, deputy head of Hamas' political bureau, told Al-Monitor.

He said, "Although [Turkey] has worked to lift the blockade completely over the past years, [the agreement] has disappointed some Palestinians. Yet Turkey should not be blamed for failing to lift the siege. Turkey could have reached a deal with Israel in early 2015, but it continued to negotiate on lifting the siege. Eventually, Turkey showed the Hamas leadership the agreement, out of respect, which suggests that Hamas-Turkish ties are at their best.”

Palestinian reactions to the deal varied, particularly regarding the Gaza situation and Turkey's inability to fulfill its promise that the blockade would be completely lifted.

On June 27, Hamas issued an official statement thanking Turkish President Recep Tayyip Erdogan for the country's efforts to help Gaza and to ease the blockade. Turkey was keen to inform Hamas of the details of its agreement with Israel during a visit June 24 by Khaled Meshaal, head of Hamas' political bureau, to Ankara, where he met with Erdogan.

Said el-Haj, a Palestinian researcher in Turkish affairs based in Istanbul, told Al-Monitor, “Believing that Turkey had the ability to lift the siege completely on Gaza was unrealistic from the beginning. This is given the multiple Israeli, Palestinian and regional parties involved, although Ankara could have reached a compromise solution with Tel Aviv to ease the siege and recognize a larger Turkish role in Gaza by building a sea-lane passage [to Gaza]. Yet during the negotiations, Turkey waived the condition to lift the siege and limited its role to the provision of food aid to Gaza.

"The deal may prompt Hamas and Turkey to manage ties behind closed doors. Although Hamas is keen not to anger Turkey, the Turkish-Israeli agreement indicates that Hamas’ crisis has reached its foreign policy and regional alliances.”

Hamas is aware that Turkey agreed with Israel without achieving a complete lifting of the siege because of the internal and regional challenges Turkey faces, the latest of which was the June 28 suicide bombing attacks at Istanbul Ataturk Airport. Turkey is also dealing with the widening differences in the region — contrary to Turkey's "zero problems" policy announced after the Justice and Development Party rose to power in 2002.

While Turkey insisted that the deal with Israel not include a clear reference to driving Hamas leaders and members residing in Turkey out of its territory, the agreement stressed that Hamas will not be allowed to plan and carry out acts of hostility against Israel from Turkey. Israeli daily Yedioth Ahronoth posted an article June 27 including the names of Hamas leaders active in Turkey.

Yahya Moussa, a Hamas leader and chairman of the Palestinian Legislative Council's Oversight Committee, told Al-Monitor, “Hamas did not aspire to achieve more advantages from the Israeli-Turkish deal, which was not a bad surprise. The agreement was probably frustrating for some who are hanging by a thread. Yet Hamas’ decision-making circles are aware of the complex political equations ruling the region, most notably that the blockade on Gaza involves several aspects and parties in control of the region.

Hamas worked to contain “the shock” of the Turkish-Israeli agreement, which at first seemed to be a complete abandonment of the condition to totally lift the siege on Gaza, particularly since it did not stipulate the establishment of a seaport or sea-lane passage to the outside world. But people close to Hamas tried to defend and justify the Turkish position.

These people are probably reflecting Hamas’ desire not to direct sharp criticism toward Ankara, as it does not have the privilege of multiple regional and international ties, while other posts and reports of people close to Hamas continued to criticize the Turkish-Israeli agreement.

Abdullah Abdullah, a member of the Fatah Revolutionary Council and head of the Palestinian Legislative Council's Political Committee, told Al-Monitor, “The Palestinians and Hamas should not blame Turkey for waiving [its condition] for the deal with Israel. The deal represents a chance for Hamas to feel its extreme vulnerability, because it had great expectations from Turkey and did not realize that bad circumstances are governing Turkey’s ties with Russia, Syria, Iran, Israel and Egypt. This has prompted [Turkey] to speed up the signing of the agreement with Israel in a Machiavellian way, contrary to Hamas’ liking and hopes.”

Turkey signed the deal with Israel for purely Turkish reasons, regardless of whether Hamas approved or rejected it. The agreement may offer Hamas a chance to manage its foreign political relations based on its interests rather than on ideology. The Turkish-Israeli agreement may maintain the blockade on Gaza until further notice, with some inconclusive solutions.