The meeting between the Turkish and American presidents left key issues unresolved, with cooperation in Afghanistan emerging as the only progress to speak of. 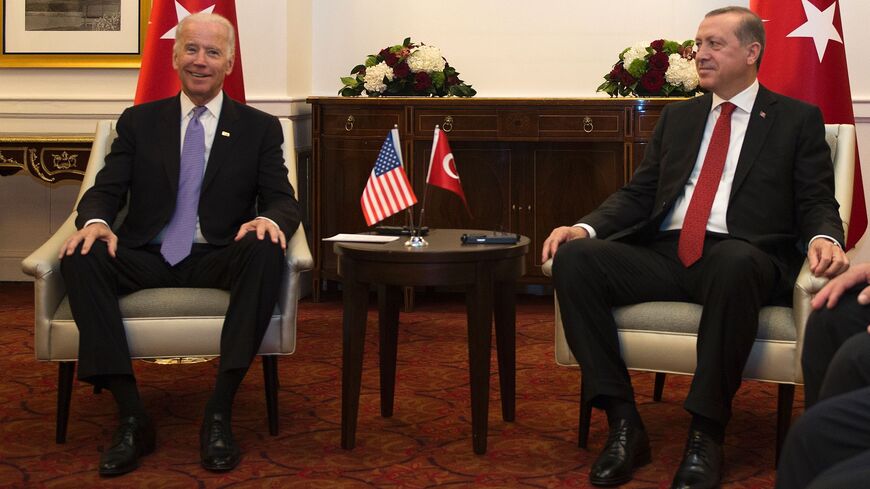 US Vice President Joe Biden (L)attends a meeting with President Recep Tayyip Erdogan of Turkey on the sidelines of the nuclear summit in Washington, DC, on March 31, 2016. - ANDREW CABALLERO-REYNOLDS/AFP via Getty Images

Over 10 days have elapsed since Turkish President Recep Tayyip Erdogan met with US President Joe Biden on June 14 on the sidelines of the NATO summit in Brussels.

The long-awaited meeting appears to have broken some ice between the two leaders. It remains unclear, however, what dividends Ankara secured from these talks. The general feeling is that it got little if anything, while many believe that Erdogan may have even made concessions he is keeping from the public.

Two issues in particular have become acid tests for measuring progress in ties, while multiple issues remain unsolved and continue to cause friction between the sides.

For Ankara, its demand that Washington end its alliance with the People's Protection Units (YPG) in Syria remains non-negotiable. Turkey says the Kurdish militia is a terrorist organization that poses an existential threat to its security. Washington continues to deepen its ties with the YPG and its political offshoots under various names. Any concessions on this point would have political consequences for Erdogan among his viscerally anti-Kurdish right-wing supporters. He needs the political support of these quarters to remain in power.

Washington's demand that Turkey rid itself of the S-400 air defense systems it bought from Russia also remains non-negotiable. It says these systems pose a threat to NATO assets, especially to the state-of-the-art F-35 fighter jet program. Days before the Erdogan-Biden meeting, US Secretary of State Antony Blinken told the Senate Foreign Relations Committee that Turkey was not behaving as a NATO ally with this purchase.

Erdogan needs the S-400 matter to be resolved so that US sanctions on Ankara can be lifted. A resolution would also enable Turkey to return to the F-35 program as a partner after being kicked out of it over the S-400 issue. Erdogan stressed once again after meeting Biden that Turkey’s position on the matter would not change. Any concession in this area would also cost Erdogan politically at home.

Nevertheless, a resolution appears as unlikely today as before the Erdogan-Biden talks. All that was agreed on was for experts from the two countries to get together to discuss how the differences could be overcome.

Galip Dalay of the Brookings Doha Center told the Karar newspaper Ankara is willing to take steps to resolve the S-400 issue but not the ones Washington wants. Dalay added, “The S-400 crisis is not a foreign policy crisis but a crisis of domestic politics.”

Erdogan was clearly hoping to open a direct channel of communication with Biden during their meeting in Brussels. He needs the kind of relationship he enjoyed with former President Donald Trump, who was willing to make direct interventions.

It was telling that Erdogan stressed his “long-time friendship with Biden” after their talks in Brussels.

He also told reporters that the two had agreed “to open direct channels of communication” to “discuss issues that divide them as well as issues they have shared interests in.”

Despite the images of camaraderie in front of the cameras in Brussels, it’s no secret that the two men are deeply wary of each other. Past remarks suggest that for Biden, Erdogan falls into the group of autocrats that must be brought in line by democratic nations.

Erdogan, for his part, seems convinced that Biden is just another Western leader who wants to see him toppled as president. Turkey’s debilitating international isolation and its economic cost on the country, however, have weakened Erdogan’s hand. Many observers agree that he desired this meeting more than Biden.

“Because of the economic situation Erdogan could not afford to resist Washington any longer,” said Ilter Turan, professor emeritus of political science at Istanbul Bilgi University.

“What Erdogan wanted was to personalize his relationship with Biden, but failed to achieve this,” Turan told Al-Monitor. “Biden is not keen on this; what he wants is institutional ties with Turkey, not personal ties with Erdogan.”

Erdogan has offered to keep Turkish security forces at the international airport in Kabul following the US military withdrawal from Afghanistan. “Its offer regarding Afghanistan shows the extent to which it is prepared to make sacrifices in order to improve ties,” Turan said. He added that Erdogan did not secure anything from his talks with Biden with regard to Ankara’s multiple demands from Washington.

Clearly, Erdogan needs to be more convincing if he wants to improve conditions for the Turkish economy through better ties with the United States.

The Turkish lira plummeted further after the meeting, indicating that the market has yet to buy into the positive image Erdogan is trying to create regarding ties with Washington.

Afghanistan, in fact, appears to be the only issue of substance that Biden concentrated on during his meeting with Erdogan, and he seemed pleased with what he obtained.

“We had long discussions, and I feel very good about our meeting,” Biden told reporters after the talks. “I’ll let the Turks tell you about it,” he added cryptically, suggesting that sensitive matters had been discussed that he would prefer Erdogan to reveal.

That Turkey came away with nothing from these talks with regard to the YPG and little progress was made on the S-400 matter displeased Erdogan’s vehemently anti-American ultranationalist supporters. They are also angry that Erdogan, by his own admission, did not bring up the matter of Biden’s recognition in April of the Armenian Genocide. It is a highly sensitive issue for Turkish nationalists.

Fielding reporters’ questions after his talks with Biden, Erdogan said, “Thank God this topic never came up.” His Islamist and right-wing supporters were left aghast.

Just prior to meeting Biden, Erdogan had said it was unthinkable that he would not bring up this issue and express Turkey’s deep displeasure over it.

“It remains unclear to what degree Biden considers Turkey an ally,” Devlet Bahceli, the leader of the far-right Nationalist Movement Party and Erdogan’s de facto coalition partner, said after the Brussels talks. He went on, “They encircle us from behind while claiming to be allies. They dig Turkey’s grave; they cling to the lie about a supposed Armenian genocide and then they come and talk to us about NATO. … How can we trust them?”

“The only story to come out is the Afghanistan story,” Dalay said. “The fact that Afghanistan is the only positive agenda today in Turkish-American ties also demonstrates how artificial these ties have become.”

Turan, for his part, believes Turkey’s offer to secure the airport in Kabul may help change the anti-Turkish atmosphere in the US Congress. “This may also help secure a transactional relationship between the sides,” he said.

Taking a more positive view on the Erdogan-Biden meeting, retired ambassador Ahmet Uzumcu believes that while it produced no surprises, that such a meeting took place is of itself significant for Turkey.

“There seems to be a willingness on both sides to address bilateral as well as international issues between the relevant institutions and experts,” Uzumcu, a former head of the Organization for the Prohibition of Chemical Weapons, told Al-Monitor. “This is important since the US and the EU intend to act together on international issues. Therefore we can expect a synergy to develop between our relationships with the EU and the US, which may be to Turkey’s advantage if played well,” he added.

Uzumcu said he expects Erdogan to adopt a more accommodating attitude with regard to the United States in particular and the West in general in the coming months “in order for his credibility not to continue being questioned and tested.”

Blinken laid down Washington’s ultimate position regarding Turkey during his remarks at the Senate Foreign Relations Committee before Erdogan and Biden met. While he acknowledged the serious problems that exist between the two countries, Blinken nevertheless referred to “overlapping interests” in Syria, Afghanistan, Russia and Iran.

“We have an interest in trying to keep Turkey anchored to the West,” Blinken said.