The two leaders' first meeting as heads of state led to detailed discussions, but there were no breakthroughs. 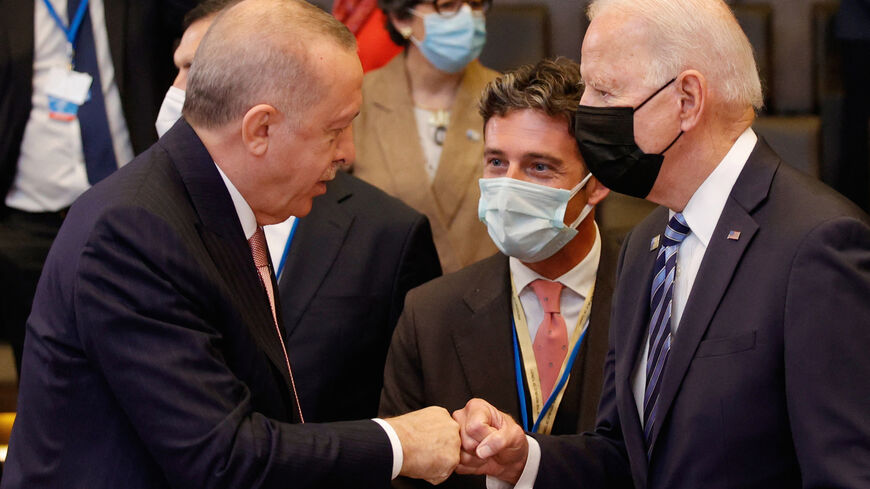 US President Joe Biden (R) speaks with Turkey's President Recep Tayyip Erdogan prior to a plenary session of a NATO summit at the North Atlantic Treaty Organization (NATO) headquarters in Brussels, on June 14, 2021. - OLIVIER MATTHYS/POOL/AFP via Getty Images

The long-awaited meeting today between Turkish President Recep Tayyip Erdogan and US President Joe Biden went pretty much as expected, with none of the big issues poisoning ties between the NATO allies getting resolved. The two leaders both said the 90-minute-long encounter on the margins of the NATO summit in Brussels had gone “very well” — Erdogan went as far as to claim that “We think that there are no issues within US-Turkey ties [that are unsolvable] and that areas of cooperation for us are greater than [our] problems.” However, Erdogan’s comments during a subsequent news conference offered little in the way of proof.

The deepest sore is Turkey’s acquisition of Russian S-400 missiles, for which Turkey has already paid a hefty price. It’s under an effective arms embargo from the United States and has been kicked off the F-35 consortium that produces the fifth-generation fighter jets. Erdogan repeated the line that Turkey had resorted to acquiring the Russian kit because Washington had refused to sell it Patriot missiles. In truth, a deal for the Patriots failed over technology transfer issues. Russia sold Turkey its “export” version of the missile batteries, so what’s the difference, critics ask.

Erdogan dodged reporters’ questions about whether any actual progress had been made on the matter. He would only say that defense officials from both sides were in discussions about it. Congress passed legislation that specifically states Turkey has to give up possession of the S-400 in order for sanctions to be eased.

Biden also clearly spurned Turkey’s repeated demands to ax the Pentagon’s partnership with the Syrian Kurdish-led Syrian Democratic Forces. Turkey insists the armed group that helped the US-led coalition defeat the Islamic State are part of the Kurdistan Workers Party, an armed group that’s been fighting Turkey since 1984 and is labeled a terrorist group by the EU and the United States. The Syrian Kurdish fighters are not. Erdogan told reporters he had “regretfully” observed during his meeting with Biden that the United States continued to maintain that distinction.

Western diplomats present at the summit said Erdogan had struck an uncharacteristically subdued tone throughout the event, giving assurances that Turkey was a loyal and critical NATO ally. Erdogan acknowledged that the issue of Biden’s use of the term "genocide" to commemorate the World War I massacre by the Ottomans Turks of more than 1 million Armenians on April 24 — making him the first American president to have done so — had “thankfully” not come up during their meeting. Yet Erdogan had publicly pledged to air his ire over the issue during his face time with the US president.

“There was no chemistry with Biden, no ice broken yet,” said a senior Western official speaking on condition of anonymity to Al-Monitor. The official added that Biden had taken a very robust stand against authoritarianism “including within the alliance.” Erdogan and NATO member Hungary’s Prime Minister Viktor Orban are both viewed as authoritarians, while Poland’s president Andrzej Duda is trending in that direction.

Still, Erdogan sought to present the meeting as a success, telling reporters he had invited Biden to Turkey and Biden had said once his schedule is clear he will go there. But he gave no indication that Biden had invited him back. Erdogan said he would be traveling to the United States to attend the UN General Assembly opening in September and to inaugurate a Turkish cultural center in New York.

“Erdogan is not enjoying a free pass anymore, except from the Brits who are openly pro-Turkish on everything and even S-400 despite their anti-Russia stand,” the Western official noted.

Nicholas Danforth, a senior research fellow at the Hellenic Foundation for European and Foreign Policy, said, “So far the spin is exactly as expected and says little about the substance. Ankara got a good photo op and keeps pretending there is some kind of positive dynamic.”

This is of critical importance to Erdogan, as he struggles to put the faltering Turkish economy back on track and lure foreign investors who’ve been deserting the country in recent years.

The US dollar continued to gain value against the Turkish lira today after weakening temporarily in the run-up to the Biden-Erdogan meeting on the back of positive hype about its outcome.

Afghanistan is being touted by Ankara’s cheerleaders as an area where the two countries can work together. Ankara has offered to operate and protect the Kabul airport after US and NATO forces withdraw from the Central Asian country, and NATO chief Jens Stoltenberg affirmed that Turkey would play a key role. However, the Taliban says it is opposed to Turkey’s continued presence. Turkey’s allies Pakistan and Qatar, which hold sway over the Islamist militia, are expected to intervene on its behalf.

“At best, behind the scenes both leaders conveyed a desire not to exacerbate their already considerable differences. The real question is how long this comfortable balance of delusion and dysfunction can endure,” Danforth said. “If they really did have a candid meeting it won’t solve any problems but at least it might help prevent the emergence of new ones,” he added.

There was no readout from the White House on the Erdogan-Biden meeting as of the time of publication.