Ankara denies the suggestion from Moscow that a second batch of S-400s is headed for Turkey and says it is an effort to stall Turkey’s talks with the United States and Europe. 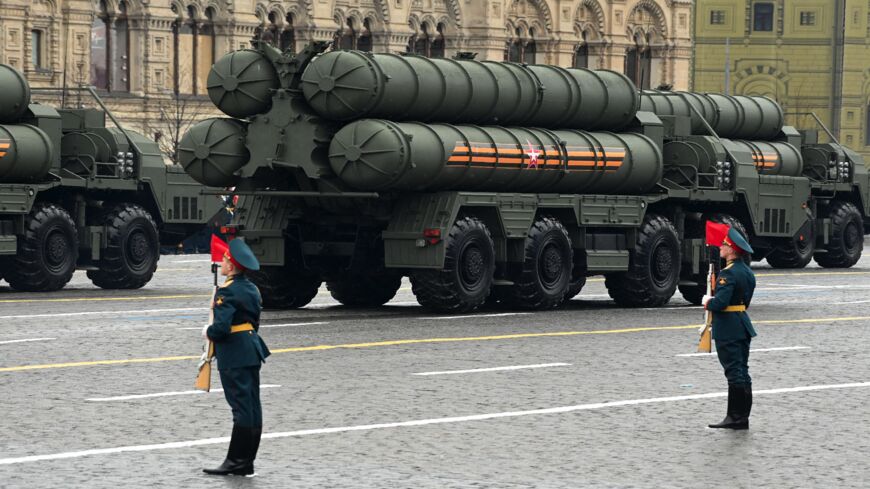 The military logic of Turkey’s highly controversial purchase of S-400 anti-ballistic missile defense systems from Russia in 2017 continues to defy many analysts.

The topic remains a major sticking point in Turkey’s strained relationship with the United States and its European allies.

It has also deprived Ankara of a strategic asset, such as the state-of-the-art F-35 fighter jets it hoped to bolster its air force with. Turkey was expelled from that program by the United States because of its multibillion-dollar S-400 purchase.

It is still not clear where and when Ankara hopes to deploy the Russian systems and what any possible scenario for their ultimate use will be.

Nevertheless, what many feared could now be turning out to be true. Indications are emerging that Moscow may be using the S-400 issue to apply pressure on Turkey at a time when Ankara is trying to improve its ties with the West.

The announcement last week by Alexander Mikheyev — the head of Russia’s arms export agency, Rosoboronexport — that the second batch of S-400s would soon be heading for Turkey created a stir in Ankara.

Fielding questions from reporters during the Army 2021 Forum in Moscow, Mikheyev said the final touches were being given to an agreement regarding this sale.

He said the deal would be finalized shortly. “We are working on it. And ‘shortly’ means this year, of course."

Clearly unhappy about the timing of this statement, Ankara’s response to Mikheyev was icy, to say the least.

Sources close to Turkey’s defense industry denied that any such deal would be concluded in the coming months.

“This is a topic that can be discussed at any time, but we have no such request at this stage,” a defense source told BBC Turkish.

Today’s issue, according to the same source, is Afghanistan and the close dialogue between Ankara and Washington regarding this topic.

“The Russian side is either declaring its intention or trying to manipulate the cooperation we are engaged in with the United States,” the source said.

President Recep Tayyip Erdogan was also circumspect. He touched on the topic in a general manner when asked by reporters during his flight home from a visit to Bosnia Herzegovina and Montenegro.

“We are not reluctant about the second batch of S-400s from Russia or about similar topics. We have taken many steps with Russia regarding the S-400s or other defense industry matters,” Erdogan said.

However, he refrained from going into details and said nothing to indicate that a deal for the delivery of more S-400s was in the pipeline and would be concluded by the end of the year.

“At this point, Russia has nothing to lose as far as the S-400s are concerned. The sale has been concluded and the money received,” said international relations professor Ilter Turan from Istanbul’s Bilgi University.

When questioned by Al-Monitor, Turan suggested that Moscow is also pleased by the political results of this sale.

“Regardless of whether Ankara makes these systems operational or not, this purchase has resulted in doubts about Turkey’s commitment to [NATO] and sowed the seeds of discord within the alliance,” Turan said.

Analysts believe Erdogan is caught between a rock and a hard place with regard to Russia today. His vision of establishing strategic ties with Moscow to replace Ankara’s seriously deteriorated ties with the West has proven to be little more than a pipe dream.

Ankara has discovered over these past three years in particular that differences with Moscow and Russia over issues such as Syria, Libya, the Caucasus and Ukraine are not only insurmountable but are also sources of potential tensions between the two countries if not managed carefully.

This has also been a period in which Erdogan has had to reflect more realistically on just how dependent Ankara is on the West for a host of reasons, the most pressing one being the state of Turkey’s deteriorating economy.

The S-400 issue has also resulted in US sanctions being slapped on Turkey under the Countering America's Adversaries Through Sanctions Act (CAATSA).

Erdogan’s meeting with President Joe Biden on the sidelines of the recent NATO summit in Brussels also highlighted his need to improve Turkey’s ties with the United States.

These ties have regressed seriously in recent years over multiple issues. The S-400 topic is only one of these.

Erdogan’s offer to Biden to help Washington extricate itself from its debacle in Afghanistan was also seen in this light by seasoned diplomats.

Responding to persistent calls from Washington, especially from Congress, for Turkey to change its stance on the S-400s, Erdogan nevertheless stressed prior to meeting Biden that Turkey’s position on this matter would not change.

Erdogan’s political position at home has been weakened due to mismanagement by his administration on many levels, so he can ill afford to be seen as backpedaling on such a controversial issue.

He knows that doing so would add fuel to the opposition’s claim that his foreign policy choices have been disastrous for Turkey.

Many argue that Erdogan has landed himself in a trap of his own making with the S-400 issue by handing Russia a card that it can use to try and influence Turkey’s decisions.

Moscow is closely monitoring Erdogan’s efforts to reach out to the West for economic support and assistance against a new flood of refugees, this time from Afghanistan.

“Making such a statement at a time when Turkey is trying to improve ties with the United States could be an attempt to try and obstruct that process,” said Turan, referring to the remarks by the CEO of Rosoboronexport.

The Russian side has also made it known through various channels that it is generally unhappy with Turkey’s positions on regional conflicts ranging from Syria and Libya to Ukraine and the Caucasus.

Al-Monitor’s Amberin Zaman has highlighted Moscow’s most recent rebuke to Turkey over Ukraine and Crimea.

Turkey’s critical assistance to Azerbaijan in wrestling back Nagorno-Karabakh from Armenia also ruffled feathers in Moscow.

Russia is doubly sensitive to this issue because Turkey is supplying the Ukrainian military with the same drones that it supplied the Azeri armed forces with to great effect.

The once much-touted notion by Erdogan and his followers that Turkey and Russia could establish strong ties with a view to jointly opposing the West has proven to be the fallacy that it always was.

Made aware of this at a time when it faces serious problems on all sides, Ankara is trying to restore its place in the Western alliance.

The need for Turkey’s support — especially in Afghanistan now — also ensures that the United States and Europe are keen to continue cooperating with Turkey on a host of practical matters.

“Turkey’s desire to join [PESCO] shows that while it wants to prevent NATO from losing strength, it also does not want to be left out of [Western] structures other than NATO,” Yinanc wrote in her column for the T24 news portal.

Turan recalled that Turkey had actively participated in recent NATO exercises and posed no problems for NATO ships using the Montreux Treaty to access the Black Sea for military maneuvers.

“Turkey is taking steps at the present time to balance the ties it is developing with Russia. Turkey and Russia continue to cooperate but at the same time they are trying to counterbalance each other's strength,” Turan said.

Turan added, however, that Turkey does not want to shut the door on Russia either with regard to topics like the purchase of more S-400s “because it is not sure how relations with the West will progress.”