US, NATO wait to see if Russia-Turkey defense deal goes through

Turkey’s recent move to acquire a Russian S-400 missile defense system has raised eyebrows in the United States, as Moscow looks on with a smile. 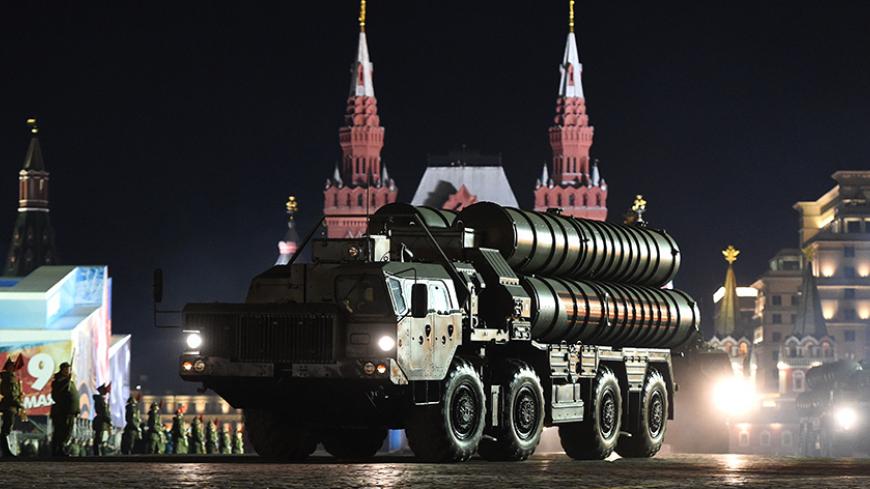 Turkey’s plans to procure an advanced long-range air and missile defense system (LORAMIDS) has been dragging on for 10 years, but now it could be leading to a profound crisis of confidence between Turkey and the US-Western security blocs.

The latest indicator was a July 23 statement by Chairman of the US Joint Chiefs of Staff Joseph Dunford at an Aspen, Colorado, security forum: “[Turkey has] not bought the S-400 air defense system from Russia. That would be a concern, were they to do that, but they have not done that."

Russia did not comment on Dunford’s statement, but Turkey reacted harshly. President Recep Tayyip Erdogan said the United States had not helped Turkey one bit in acquiring LORAMIDS, which he said is urgently needed. That's why Turkey had to look for alternatives and signed an agreement in principle with Russia.

In a July 13 story, "Turkey Chooses Russia Over NATO for Missile Defense," Bloomberg reported that the proposed deal for four S-400s would be worth $2.5 billion.

On July 28, Erdogan spokesman Ibrahim Kalin said Turkey has been deeply disappointed by the attitudes of the West, and the United States in particular, about LORAMIDS. The agreement with Russia has been mostly concluded, he said, disclosing for the first time that Russia has agreed to joint production and technology transfer.

Many wonder if this development will affect Turkey’s NATO membership.

Turkey’s quest for LORAMIDS has been problematic from the outset. Ankara’s ultimate goal is to manufacture its own system. Ankara has already made some progress with the Hisar-O medium-range air defense system made by Roketsan A.S., the Ankara-based affiliate of the Turkish Armed Forces Foundation. Turkey's goal is to develop this model and manufacture its own LORAMIDS by 2025. It's no secret that Roketsan is cooperating with Paris-based Eurosam on this project. In the meantime, Turkey is determined to fill its urgent security needs, given the Syrian crisis and Iran’s aggressive ballistic missile program.

When Turkey went shopping for a LORAMIDS, it received offers from the Eurosam French-Italian partnership for the Aster 30 SAMP/T; from China for its China Precision Machinery Import and Export Corp.’s HQ-9/FD-2000; from Russia’s Rosoboronexport with the S-400; and from US Raytheon for PAC-3 systems. Turkey launched negotiations in 2013 for the $3.4 billion Chinese HQ-9 model, but called off the plan in June 2015 because the HQ-9 did not have anti-ballistic features and the company was not willing to discuss technology transfer. No doubt, NATO pressures played a role in the decision to call off the Chinese contacts. Meanwhile, Turkey felt that because of the growing ballistic missile threat from Syria, it urgently needed a defensive system. NATO tried to fill the void by deploying US, German, Italian and Dutch Patriot and Aster systems on Turkey’s Syrian frontier from 2014 to 2016.

In the days following Erdogan’s announcement of the S-400 as his system of choice, the Turkish news media became very interested in the affair. In just four days, the Turkish media printed 36 news reports and 12 commentaries on the S-400. According to some media outlets, 80% of the public supported the S-400 without reservations, 15% were somewhat cautious and only 5% were against it. These statistics indicate Erdogan’s influence over the media, as well as the growing anti-West sentiments in Turkey.

Security analyst Turan Oguz told Al-Monitor the S-400 will provide defense against short-range ballistic missiles with a 620-mile range. Also with the S-400, Turkey will be able to monitor air activity up to 372 miles in neighboring air spaces and lock its radars onto them at a distance of about 250 miles. Oguz said this capacity will enhance Turkey’s military, political and diplomatic deterrence in the region and minimize any surprise actions against Turkey. Oguz also believes these systems will significantly increase Turkey’s military superiority in the Aegean Sea.

Those commenting cautiously on the S-400 acquisition have technical and political reservations. Deniz Zeyrek, of the daily Hurriyet, finds Turkey’s selection of the S-400 a risky move that will erode NATO’s "collective defense" strategy set out in its charter, and it will create more dependence on Russia.

Defense analyst Arda Mevlutoglu told Al-Monitor that until Turkey develops its national defense industry — which won’t be easy — Turkey will have to procure LORAMIDS from external sources. “Long-range ballistic missile and air-defense systems have to operate as an integrated network of intertwined elements to be effective against cruise or ballistic missiles, which are targets hard to acquire and eliminate. Otherwise, your system will be limited for use against planes and helicopters at medium and high altitudes. Used singly, S-400 will have limited effectiveness. We have to continue at full pace to develop national radar and air defense systems. I am afraid procuring the S-400 will stall those vital projects,” he said.

Hakan Kilic, an expert who opposes Turkey's purchase of an S-400 system, has two technical objections. First, he doesn’t believe Russia will ever give Turkey its advanced radar technology, software and guidance systems, even though “Turkey will pay $5 billion for a system from a leaflet, without even a test video." Moreover, he said, the S-400 will be incompatible with other radar and communications systems. "I think that such a stand-alone system, which in principle can be used only against airplanes, is much too expensive,” Kilic said.

Kilic also believes that a system that's not part of an integrated umbrella will be easily defeated by both NATO and Eastern bloc countermeasures. “Why should I pay billions of dollars for a system that I won’t be able to use productively in case of war?” he added.

Also raising eyebrows is Russia’s silence while the S-400 is becoming a full-fledged crisis between Turkey and the West.

Moscow State University political science expert Kerim Has identified two reasons for Moscow’s silence: “First, Russia is waiting for the right time. Second, final signatures have not been affixed. The Kremlin doesn’t want to sound like it's contradicting Erdogan by having to say, ‘No, we haven’t affixed our final signature,' because it prefers the NATO/S-400 debate to widen" and create discontent.

Mikhail Barabanov, a senior research fellow at the Moscow-based Center for Analysis of Strategies and Technologies, attributes Russia’s silence to domestic politics. "This sale causes mixed reactions in Russian public opinion and among experts, given the outbreak of anti-Turkish sentiments" after Turkey shot down a Russian plane in 2015, as well as Turkey's membership in NATO and the country's "contradictory attitude toward the Ukrainian crisis."

He added, "Apparently, the Kremlin does not want [domestic] public discussions on this issue and is trying to conduct a deal without publicity" within the country.

Has and Barabanov don’t believe the S-400 can be delivered to Turkey before 2020, even if a final accord is reached. Has emphasized his belief that Russia is pleased with the raging arguments. “Russia is delighted because the S-400 debate can lead to a rift in its primary geopolitical foe, NATO. A possible breakup in NATO-Turkey relations has the potential of being the grandest strategic gain of the 21st century for Moscow. Moreover, by showing that it can sell such systems to a NATO country, Russia boosts its standings in the global weapons market,” Has said.

Barabanov believes Russia won’t actually transfer S-400 technology to Turkey. He said, “The order volume is too small, and the import of technologies will require a long-term agreement, which is clearly not there. The Turkish side understands this well.”

Barabanov, who drew attention to NATO member Greece’s use of the S-300PMU1 long-range, surface-to-air missile (SAM) system for a long time, added, “I believe that the question of the alleged incompatibility of Russian SAM systems with NATO systems is too politicized and not practical.”

Regardless of speculation, it's obvious Washington is concerned with Turkey’s efforts to acquire the S-400. Russia is happy but silent, and Ankara is emotional and furious with NATO and the United States.