Turkey’s final choice for its anti-missile system will offer important clues whether the country will turn to the West or the East. 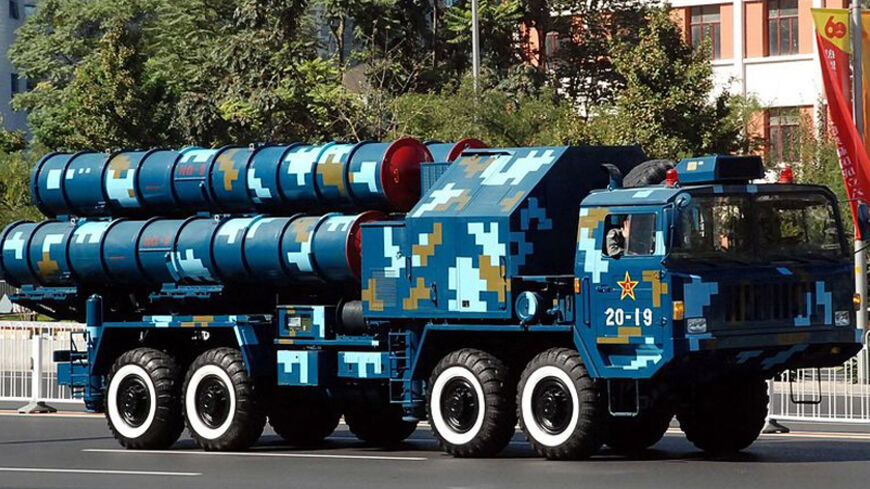 China's HongQi-9 (HQ-9) launcher was part of China's 60th anniversary parade, Oct. 31, 2009. The HQ-9 is the domestic version of the FD-2000 missile that Turkey appears to be having second thoughts about purchasing. - Jian Kang

After Turkey decided in 2006 to procure a long-range air and anti-missile defense system known as T-Loramids, a long and a hot contest pitched the US PAC-3 Patriot, Russian S-400, French/Italian SAMP/T and Chinese HQ-9 models. Raytheon-Lockheed Martin of the US and European Eurosam companies made particular efforts to win Ankara’s favor. While everyone was expecting one of these two companies to win the contract, in September 2013 a bombshell hit the agenda when Turkey decided on China’s state-owned Precision Machinery Import-Export Corp (CPMIEC), which was on the US sanctions list on charges of violating the embargo on Iran. The contract was awarded for the FD-2000 model, the export derivative of HQ-9 system manufactured by the company.

As not much attention is paid to transparency and accountability in Turkey’s weapons procurements, the public did not fully learn the reasons for the decision to go with the Chinese bid.

The public was able to learn a little about the background of the decision thanks to columnists close to the government. According to some columnists, the decision was based purely on CPMIEC’s low price bid and its unconditional agreement with Turkey’s contractual conditions. Columnists claimed that the Chinese company overcame the competition with its offer of 50% joint production and technology transfer.

According to some other writers, political motives — not just economic and technology-transfer ones — played a part. For example, economics writer Suleyman Yasar of the pro-government daily Sabah said the world’s economic and political focus was shifting to Asia. As Turkey is rapidly progressing toward becoming a global actor, it wanted to shape its security policy in line with economic opportunities.

From a commercial viewpoint, China's bid was significantly lower when compared with US-Russian-EU missile systems. Strategically speaking, the Chinese bid was offering a flexible system that is conducive to technology transfer, joint production and resales to third countries as well as opening the gates of Asia to Turkey.

According to a defense official in Ankara who didn’t want to be identified, Western countries, instead of trying to understand Turkey’s demands, simply say, “Trust us, we are your ally.” The same official noted that the persistent US and European disregard of Turkey’s requests for transfer of nuclear and space technology spurs Turkey to work with Russia in nuclear energy and with China in space activities. The understanding in Ankara is that the United States and Europe want to keep the reins on Turkey in these two fields. The official believes that the real culprits are the United States and Europe, which leave Turkey in the dark in these fields and do not behave as true allies. It is not wrong to say that a vast majority of the military and civilian security bureaucracy in Ankara subscribe to the same view.

The question is often asked why Turkey needs a long-range air and anti-missile defense system. At the moment the most advanced medium-altitude air defense system Turkey deploys is the 40-kilometer-range (25-mile) I-Hawk. One squadron of I-Hawks is based at Istanbul and the other is mobile in the southeast. Despite the growing missile threat in the region, Turkey doesn’t have a long-range air and anti-missile defense system. That is why Patriot batteries from the United States, Germany and the Netherlands have been deployed in Turkey during the Syrian crisis.

Turkey itself is engaged in efforts to develop its air force and long-range air defense systems. Turkey has ordered 100 new F-35 new generation fighters and decided to set up an air force Combined Air Missile Command.

What is the status of this protracted saga of the missile purchase now? The headline of a December 2013 Aktuel magazine article was “How Does Turkey’s Choice of China Alter the Balance?” The subhead was “While Western countries are trying to get Turkey to retract its decision, China is standing tall with its success.” The article basically said that Turkey, with its correct decision, not only had dropped a bomb on the Western security alliance but had also crossed a major psychological threshold toward an independent and nonaligned foreign policy,

But now, one year later, Turkey’s position is the total opposite of what Aktuel was saying. Although China may still be proud of its first sale of this scope ever to a NATO country, the Turkish side is certainly perplexed. Negotiations with the Chinese firm were extended for the fifth time in August. Turkey now says it will make its final decision by Dec. 31.

After Turkey announced it will review its contract with the Chinese company, President Recep Tayyip Erdogan, on his way back from the NATO summit in Wales, told journalists that negotiations with China were continuing. He said, “But the French, who are in the No. 2 position, came to us with new offers. Now we are talking with the French. Joint production is very important for us.” This was, of course, Turkey’s winking at the French-Italian company, which in August said it was making interesting improvements in its bid. That officials of the Defense Industry Undersecretariat accompanied the president in that very brief visit to Paris at the end of October did not escape notice.

Lale Kemal, who found Turkey’s maneuvers “strange,” wrote: "Ankara for some time now, because of alliance pressures and growing awareness of the reality that the Chinese missiles will not provide the security Turkey needs, has been trying to come up with ways of scrapping the negotiations with China. But while doing so Ankara doesn’t want to create the impression that it had buckled under Western pressure."

Ankara, while emphasizing that negotiations with China are continuing, is actually trying to find a plausible reason to end those negotiations. What could be Turkey’s way of getting out of that contract? According to the most likely scenario discussed in Ankara, it is to eliminate the Chinese company from the running by declaring that it hasn’t fulfilled the technical specifications on time and at the required levels, but by also offering China some privileges in other military contracts. China-Turkey cooperation in space operations and rocket engines is one way out. Another way out could be the preparation of a new set of technical specifications that will require the missile system to be used also against naval threats, with the possibility of mounting the missiles on naval platforms, a modular structure that would enable its quick upgrading to a more advanced model, and requiring a radar range of more than 1,000 kilometers (621 miles). The Chinese offer of the FD-2000 doesn’t match any of those specifications. The Aster-30 Block I model offered by French-Italian partnership does.

Prime Minister Ahmet Davutoglu, as the chairman of the Defense Industry Executive Committee, will make a decision on the bidding by Dec. 31.

Will Davutoglu surprise everyone by still preferring China or opt for the French-Italian partnership? Will he listen to his head or his heart? No matter which, there is no doubt that his decision at the end of December will constitute a major clue as to which way Turkey will turn in the coming years.