Turkey’s bargaining with Russia for the S-400 air defense system raises a number of military issues, the least of which being that the system is incompatible with NATO's defense structure. 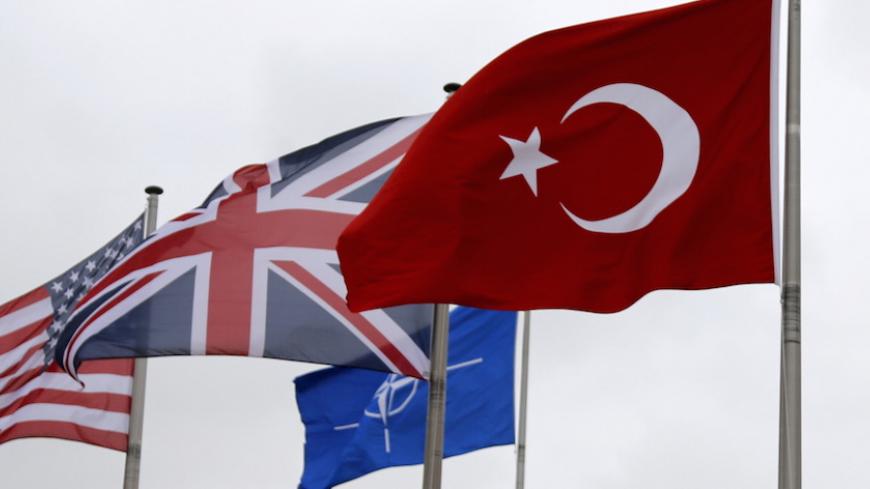 A Turkish flag (R) flies among others flags of NATO members during the North Atlantic Council following Turkey's request for Article 4 consultations, at the Alliance headquarters in Brussels, July 28, 2015. - REUTERS/Francois Lenoir

Following Turkish President Recep Tayyip Erdogan’s March 10 meeting in Moscow with President Vladimir Putin, it was reported that Turkey was engaged in negotiations to procure the Russian-made S-400 air defense system. Sergei Chemezov, the CEO of the Russian state-owned Rostec, said on March 14 that Turkey had asked for credit to buy the system, but that a deal had not yet been reached. “As soon as an agreement is signed and a decision is made on the amount of the loan, then we will sign a contract for the supply,” he said. Kremlin spokesman Dmitry Peskov confirmed a day later that both sides were interested in a deal.

NATO member Turkey opting for a Russian defensive system has serious ramifications, no doubt affecting Turkey’s strategic military and political relations. Since deciding that it should have its own defense system instead of relying solely on NATO, Turkey has been wavering between the various offerings of its Western allies and Chinese and Russian alternatives.

Turkey's desire for its own long-range air defense system did not begin with the Justice and Development Party. Ankara began toying with obtaining the US-made Patriot system since the 1991 Gulf War. Today, Turkey maintains its own US-made MIM-14B Nike Hercules and MIM-23B Hawk and British-made Rapier air defense systems. Defense experts say these medium-range systems, developed in the 1950s, are inadequate against the latest aerial weapons and advanced jets.

Given the surprising, and for Ankara somewhat worrying, progress of Iran’s national defense industry, Turkey has been questioning the wisdom of confining itself to NATO assets. Thus, in the last few years, Turkey has been thinking of acquiring a long-range air defense system in addition to developing its own national missile system. In 2013, it took bids for Raytheon-Lockheed Martin's Patriot system, Rosoboronexport's S-300-400, Eurosam's SAMP/T Aster 30 and the Chinese CPMIEC FD-2000 defense missile systems.

A tender was awarded to China in 2013 at slightly more than $3 billion. The highly controversial decision was, however, canceled in November 2015, just before the G-20 summit in Antalya as a gesture to Western allies. Following the July 15 coup attempt and with the Ankara-Moscow rapprochement, the possibility of making a deal with Russia for a system gained momentum. According to Erdogan, Turkey now prefers the S-400 because Russia reduced its initial 2013 price considerably.

Turkey is not the only country interested in the S-400. According to a 2015 agreement, Russia will be delivering 48 launch pads to China, and negotiations are ongoing to sell 80 launchers to India. After a long delay, Russia began delivering S-300PMU2 systems to Iran after Tehran agreed to a nuclear deal with the six world powers.

Turkey’s situation is, however, different from these countries, because any system procured outside NATO could be incompatible with the alliance’s current defense structure. Turkey has a ready answer to objections that the S-400 cannot be integrated. Returning from Moscow March 10, Erdogan told journalists, “There are some who cite the NATO concept as an objection. This is not an appropriate approach. Today [NATO partner] Greece is using Russian missiles. Everyone can formulate its own defensive concepts. If we cannot obtain the facilities we need from within NATO, then we have to look for different sources. Also there are other dimensions. Unfortunately in Syria, we saw the weapons of our NATO allies in the hands of terrorists.”

Defense Minister Fikri Isik said the S-400 will not be integrated into the NATO system. For starters, NATO will not allow integration, plus Turkey cannot use NATO funds or facilities to integrate it into its national radar system. Of note, the Greek model has not been successful because of NATO integration-related problems, so the S-300s Greece has deployed on Crete are basically in case of dog fights with Turkish planes over the Aegean. In regard to Turkey, defense experts point to several other problems that could arise.

The S-400 deployed in Turkey will not be linked to the system's early warning radars, because they are in Russia, thus reducing the battery's potential effectiveness. An S-400 battery deployed near the Syrian border, where it is most needed, would be facing a Russian S-400 battery deployed at Syria’s Khmeimim air base, raising the question of what happens when the two batteries identify corresponding radar from the same family. Turkey's S-400 would automatically identify NATO jets as enemy planes, potentially leading to problems involving the alliance's planes flying out of Incirlik Air Base.

The issue regarding which missile defense system to procure is not confined to debates on military-technical aspects, so what led Turkey to first approach China and then Russia? Is the rapprochement with Russia a tactical move to prod the West into making a better deal than Moscow or does it have strategic feasibility or significance?

The Russians are not yet convinced that Erdogan is genuinely interested in their S-400, and indeed skeptics believe he might be engaging in political blackmail of a sorts to procure Western systems at lower prices. After all, Turkey used the possibility of purchasing Patriots to get the Chinese to lower the cost of the FD-2000 before deciding against it. Many think that Erdogan brought the S-400 to the table to expedite normalization with Russia. Regardless of what is motivating Erdogan, the mere existence of the bargaining between Ankara and Moscow is nerve-wracking for the north Atlantic alliance.

Looking at the issue from Moscow's perspective, Putin obviously has more than money in mind with the S-400. In 2008, when Russia marched into Georgia to defend South Ossetia, there were doubts about its military prowess. Russia thereafter revamped its defense industry and in 2015 began displaying what it had achieved. Russian technology being used in Syria has raised interest, and selling the S-400 to Turkey would make it even more appealing. Turkey would be the first NATO country using modern Russian weapons. Greece has old Russian technology. The S-400 would inevitably lead to dependence on Russia and is likely to open the door to long-term military relations. Putin has been guardedly trying to exploit that Ankara has more mutual geopolitical and strategic priorities with Moscow than with the West.

None of this, however, means that Moscow will wrap up the bargaining and soon begin delivering S-400s to Turkey. Russia could well prolong negotiations and deliveries until it feels confident about Turkey’s positions. Ankara’s canceling its agreement with China gave birth to serious doubts about Turkey's reliability. Russia is not concerned about the foreign policies of China, India and Iran, but believes that Turkey’s NATO membership and vacillating positions require careful monitoring.

How might NATO respond to Turkey's dual approach to its defense? Is Turkey prepared for whatever it might be? Turkey striking a deal with Russia is not something with which NATO can deal with comfortably. Today there are countries questioning Turkey’s membership given the alliance's mission and the Soviets’, now Russians’, adversarial role. Ankara’s decision to block NATO partnership projects in retaliation for European Union states prohibiting rallies concerning switching Turkey's government to a presidential system will only further this debate. Adding the S-400 to the prevailing tensions with Europe could well open Turkey’s NATO membership to even more debate.