Also:  Bibi plots his comeback, a woman boxing coach trains men in Egypt, and the latest from Gaza, Jordan, Iraq, and Turkey. 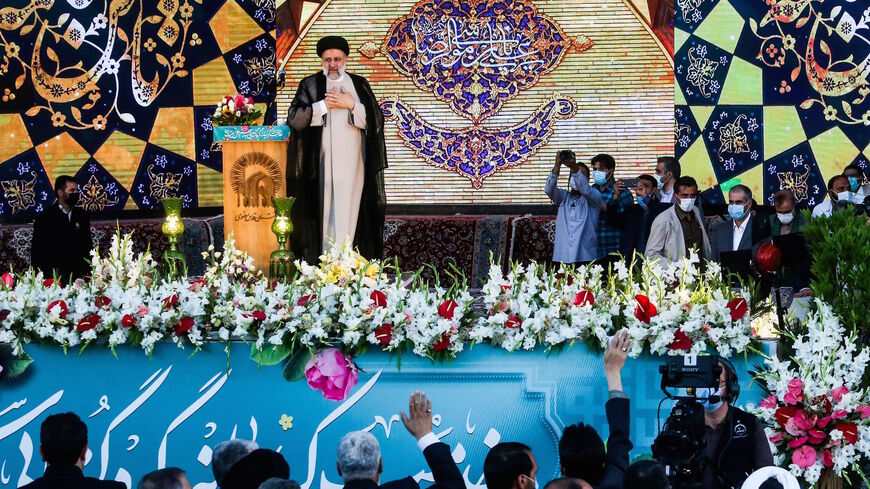 Iran's President-elect Ebrahim Raisi delivers a speech at the Imam Reza shrine in the city of Mashhad in northeastern Iran, on June 22, 2021. - MOHSEN ESMAEILZADEH/ISNA NEWS AGENCY/AFP via Getty Images

Hot Take: Why an Iran nuclear deal could be a win-win for rivals Rouhani and Raisi

Everything or nothing? The parties to the Joint Comprehensive Plan of Action (JCPOA), as well as the United States (which withdrew from the Iran nuclear deal in May 2018), may soon convene in Vienna for the seventh and perhaps final round of talks to bring the United States back into the JCPOA fold. There is anticipation of a possible accord, and declarations of low expectations. An Iranian government spokesman said this week that "unless there is agreement on all the agenda points, there is practically no deal," apparently referring not just to relief from banking and oil sanctions, as we report here, but also those sanctions imposed on individuals and entities linked to Iran Supreme Leader Ayatollah Ali Khamenei and maybe even incoming president Ebrahim Raisi, who takes office Aug. 3. A US official said June 24 that "serious differences" remain to be bridged in the talks.

Here come the Hezbollahis. Timing is of the essence. Raisi is part of a wave of "Hezbollahis," the vanguard of what Khamenei calls the "second revolution" to cultivate "a faithful, revolutionary, professional and confident manpower." Ali Hashem writes that "while the decision to engage with the West will not change" under Raisi, "the tone, expectations and ceiling are going to see a clear shift."

Raisi’s window. Before that happens, Raisi and Iran’s outgoing president, Hassan Rouhani, could score a win-win if they can revive the JCPOA in some form. Rouhani wants the win for his own legacy, as the deal was both his greatest achievement and, after the Trump administration withdrew from it, a mortal blow to the moderate-reformist camp. Raisi, as Sanam Vakil writes, knows that "the swiftest formula" to address Iran’s deep economic challenges "begins through the revival of the JCPOA." If Iran can close the deal before he takes office, Raisi can reap the benefits while not having to be seen as compromising with the West.

Since leaving office, Benjamin Netanyahu has posed for selfies, answered to the title of “prime minister,” and enjoyed the perks of his former job — all while plotting to dismantle the newly formed Israeli government.

As Ben Caspit writes, Netanyahu “is acting like a man possessed, hanging on to the remnants of his past glory and trying to fuel his popularity and his standing as a leader only temporarily out of office.” Netanyahu hopes the government led by his former protege, Naftali Bennett, will quickly fail, and in the meantime has tried to drive a wedge between Israel’s new leaders and the White House.

As Netanyahu fights for his political survival, his Likud party is gearing up for a war of succession. Afif Abu Much looks at who among Likud’s leadership is most likely to challenge Bibi for control of the party and whether his rivals have what it takes.

Amid growing frustrations with Palestinian President Mahmoud Abbas, members of his Fatah party in the Hamas-ruled Gaza Strip have announced their resignations.

Mai Abu Hasaneen writes, “The resignations come at a tense time for Abbas and Fatah, with critics claiming the authorities employ a policy of alienation and exclusion against whoever opposes the octogenarian president's policies.” The resignations followed Abbas’ recent dismissals of several Fatah figures, as well as the killing of Nizar Banat, a political activist and Palestinian Authority critic who died in PA custody.

For more news out of Gaza, check out this this deeply reported story from Hasaneen on the uptick in violence against women and how Palestinian feminists are pushing for changes to the law.

Osama Al Sharif looks at what the departure of Netanyahu means for Jordan’s ties to the Jewish state. Relations were strained under Netanyahu, with Sharif writing, “It was no secret that King Abdullah had lost trust in Netanyahu who, in Amman’s view, violated every agreement and understanding reached with Jordan over the years.”

Jordan has yet to comment publicly on the formation of Israel’s new government, perhaps because Bennett is no less right-wing than his predecessor on key issues. Bennett’s Yamina party rejects a two-state solution in which Israel and an independent Palestine would coexist, and supports expanding Jewish settlements in the West Bank.

The meeting, which focused on economic, political and intelligence cooperation among the three countries, marked the first official visit by an Egyptian head of state to the Iraqi capital since 1990. Mamouri writes that the agenda covered security threats such as the Islamic State and regional conflicts in Syria, Libya and Yemen.

Turkey is trying to shore up regional support for its offer to safeguard Kabul’s civilian airport after the US and NATO withdrawal. Fehim Tastekin has the latest on Ankara’s outreach to Pakistan and Iran, as well as the Joe Biden administration, which has welcomed a “lead role” for Turkey in securing the Hamid Karzai International Airport.

Turkey’s proposal comes at a tense time for US-Turkish ties, which are strained over a range of issues, including Ankara’s purchase of Russian defense systems. Semih Idiz writes that during their recent face-to-face meeting, President Recep Tayyip Erdogan and Biden made progress on Afghanistan but little else.

In the south of Egypt, Sabah Abdel Halim trains male boxers on the latest techniques. Women boxers are uncommon in Egypt; women coaching men, in boxing no less, is unheard of. Rasha Mahmoud has the story here.

Extremely long lines at gas stations have become a common sight in Lebanon, where crippling fuel shortages are deepening the country’s financial crisis. Gasoline-filled storage containers are causing fires in homes, and gas station workers have become the targets of near-daily attacks by people seeking the rationed fuel. Abandoned cars are scattered across the country’s streets. Hanan Hamdan examines what caused the crisis, why people are turning to the black market for gas and how Lebanon’s government is trying to stop the smuggling of fuel to neighboring Syria.

What we are reading: “Learning poverty” in the Middle East

More than half of children living in the Middle East and North Africa experience “learning poverty," meaning they can’t read or understand age-appropriate text. The gender gap is profound, with boys far more likely to be in learning poverty than girls in the region. A new World Bank report explores how Middle East countries can better teach the Arabic language, specifically Modern Standard Arabic, to young children. Read the full report here.