The move constituted another diplomatic win for Libya's transitional government ahead of elections in December. 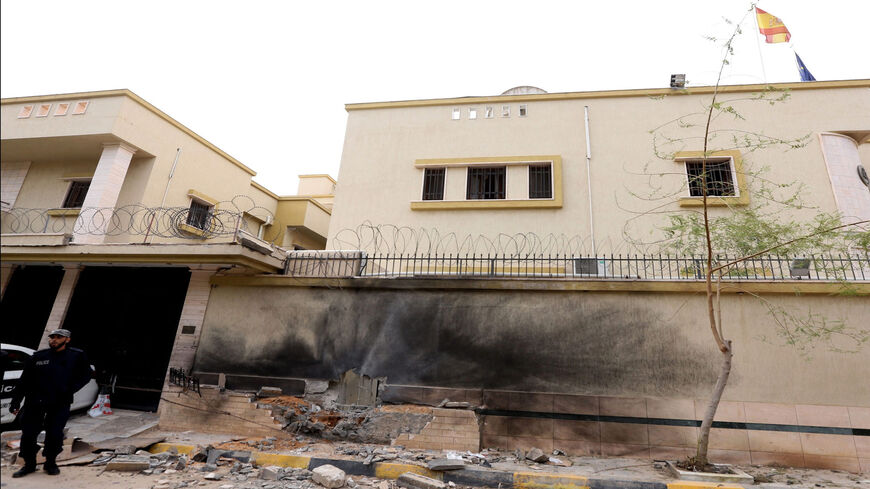 Libyan police stand guard outside the Spanish Embassy in Tripoli after a bomb exploded outside the building during the night without causing injuries, April 21, 2015. - Mahmud Turkia/AFP via Getty Images

The Spanish Embassy in Libya reopened June 3. Libya’s head of government said during a press conference marking the occasion that the country is experiencing a historic moment.

“We are witnessing a new stage in Libya of stability after years of war and destruction,” Abdulhamid Dbeibah said. He thanked Spain for “supporting Libya’s democratic transition.”

Spanish Prime Minister Pedro Sanchez visited Libya to reopen its embassy and resume bilateral relations between the two countries. Spain closed its embassy in the capital Tripoli in 2014 at the start of the Libyan civil war, moving its Libya mission to neighboring Tunisia.

Libya’s civil war ended last October with a cease-fire between the Government of National Accord in Tripoli and the eastern-based Libyan National Army led by strongman Khalifa Hifter. A transitional government headed by Dbeibah took office in March and elections are scheduled for December. Libya had been in chaos since the 2011 NATO-led intervention against longtime ruler Moammar Ghadafi during a national uprising.

The new unity government has gained some recognition from other Mediterranean and North African states since being sworn in. France reopened its embassy in Libya in March. Tunisian President Kais Saied visited the same month.

Sanchez also met with the president of Libya’s Presidential Council Mohammad Younes Menfi. The council is part of the transitional government. They discussed stability in Libya, business ties between Libya and Spain, security matters and the fight against the coronavirus, according to a Spanish government release.

Spain is a potentially important partner for Libya because it is a member of the European Union. Spain is also a destination for people crossing the Mediterranean Sea from North Africa.