The next government is not composed yet, but outgoing Prime Minister Benjamin Netanyahu is already preparing his next campaign for the premiership from the opposition benches. 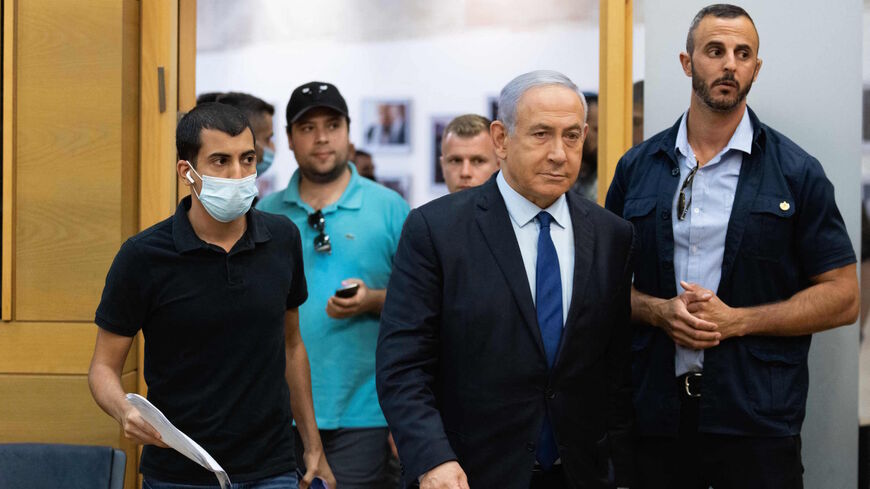 Israeli Prime Minister Benjamin Netanyahu arrives at the Knesset to deliver a statement in Jerusalem, May 30, 2021. - YONATAN SINDEL/AFP via Getty Images

Prime Minister Benjamin Netanyahu seemed to be in a great mood, reported a senior political figure who met with him privately May 31. Just a few hours earlier, the prime minister hosted his old friend, Republican US Senator Lindsey Graham, in his office in Jerusalem. Netanyahu seemed at ease and was said to be beaming as he left the meeting. Graham, who is known for his hawkish foreign policy views, has been outspoken in his support for Israel and Netanyahu.

The source told Al-Monitor on condition of anonymity that Netanyahu had a very positive attitude. Nothing about his behavior suggested that just hours earlier, the government that is likely to replace him made significant progress in achieving its goal. Yamina chair Naftali Bennett announced that he was determined to serve as prime minister for the change bloc. It sounded like the death knell for the Netanyahu government.

It is fairly safe to assume that Netanyahu succeeded in hiding his inner emotional turmoil from his guests during his meetings yesterday. Bennett, who is not yet 50, had served as his chief of staff when Netanyahu headed the opposition. Now the man that Netanyahu had come to disdain and refer to as the “high schooler,” is about to replace his old boss.

Far from a resounding defeat at the polls, the shift is the product of political maneuvering and coordination by the many parties on the left and the right who joined forces to unseat Netanyahu. Bennett heads a party with just seven seats while Netanyahu heads the largest political grouping in Israel: He controls 30 seats from people who voted directly for the Likud under his leadership, and another 22 seats from those who voted for him indirectly as leader of the right-wing bloc that their parties support. Netanyahu believes that he won the election, only to have his victory stolen by Bennett.

The new government is expected to be sworn in next week in what is sure to be a dramatic historic event. Netanyahu will leave office after serving as prime minister for 12 consecutive years as well as the house on Balfour Street that has become a symbol of his long rule.

Netanyahu’s remarkable struggle to survive lasted two and a half years, in the face of numerous criminal indictments. He is likely to keep trying to stop the new government until the very last moment.

The big questions now are: What will Netanyahu do on the day after he is removed from office? What are his plans? And what will happen to Israel’s political system after this explosive change. Israel’s right- and left-wing blocs may be coming together, but the coalition is built only on his ouster.

All signs seem to indicate that Netanyahu plans to remain politically active as head of the opposition. It will be his third time in that position, and he is likely to be once again a powerful and effective opposition leader. If the new government falls in a matter of months, a fifth election will be held, and he will be able to return to the prime minister’s office.

It may sound ridiculous to some, but Netanyahu is the kind of person who never gives up. He sees himself as a historic leader of the Jewish people, whose life mission is to ensure Israel’s safety and security. His opponents see him as a dangerous individual who is clinging to his seat, come what may. They regard him as a corrupt leader who became progressively unrestrained the deeper he got into trouble. His base of supporters — a very large one — credit him with leading Israel toward unprecedented diplomatic and economic achievements. Most of all, they still see him and as someone the left cannot truly defeat.

His rivals recognize that he is still a powerful public figure, and the new government will act quickly to pass laws to prevent him from running again for premier because of his criminal indictments him.

Netanyahu is already campaigning to return to office from his new position as head of the opposition. His speech after Bennett’s announcement that he plans to serve as prime minister provides a rough outline of his plans.

But to all of his opponents and enemies, Netanyahu looked like he had lost his nerve. Gone was his typically cool demeanor as he delivered his speech. Instead, he seemed tense and battered, like a man who had just lost the fight of his life. Most of all, Netanyahu looked humiliated.