If Blue and White leader Benny Gantz neglects to reward the Arab sector for its crucial role in bringing down the government of Benjamin Netanyahu, he will find himself back in the opposition. 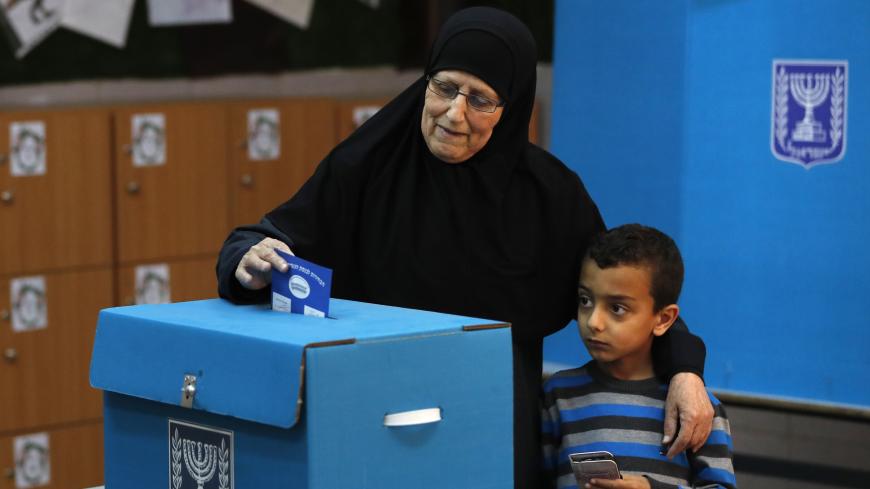 Prime Minister Benjamin Netanyahu addressed the 2012 AIPAC conference about the Iranian nuclear threat. Using a famous English adage, he told his audience, “If it looks like a duck, walks like a duck and quacks like a duck, then what is it? That’s right, it's a duck!” Today, that duck is Netanyahu — a lame duck. Now that 99% of the votes are counted, it looks like the Netanyahu era is over.

With just 31 seats for the Likud and 55 for the right-ultra-Orthodox bloc, it is obvious that Netanyahu failed in his efforts to win 61 seats without Liberman, which would have assured him a coalition that could have adopted legislation to protect Netanyahu from indictments. Thus, early this October, his attorneys will have to appear for a pre-indictment hearing before Attorney General Avichai Mandelblit without immunity from prosecution on the horizon. As such, he will do anything he can to keep his position as prime minister. According to Israeli law, a prime minister can serve even while he is indicted, right up until his verdict.

Anyone who has followed Netanyahu’s career will know that he will be the last person to throw his hands up and admit that he lost the September 2019 election. That is why, in his election night speech, when he was already aware of the Joint List’s success with 13 seats, Netanyahu stressesd that under no circumstances should there be a government with “anti-Zionist parties.” He hoped to prevent Blue and White Party chairman Benny Gantz from as much as holding talks with the predominantly Arab group. He seemed to have forgotten that the Joint List is in no rush to join any coalition, and that the ultra-Orthodox parties can hardly be called Zionist.

Despite his election night declaration that he would work to form a “Zionist government,” Netanyahu was quick to meet with the ultra-Orthodox parties the very next day to form a technical bloc led by him and including Yamina for a total of 55 seats. Then, on the morning of Sept. 19, he called for the formation of a broad unity government with Gantz and his Blue and White Party. Yes, the same Gantz about whom he once said, “If he can’t protect his own phone, how will he protect the country?”

The election results may have been devastating for Netanyahu, but they did not stop him from tweeting about Iran or attacking Channel 12 in a Facebook post, his way of signaling that everything is business as usual. It is possible that deep inside, he is starting to realize that the end is approaching, but he will never admit it. Refusing to acknowledge a loss is an essential part of his strategy. It is no different from the way that up until now, he and his people refuse to admit that he failed to form a coalition government after last April’s election, preferring instead to drag the whole country into a new round of elections that only hurt him in the end.

The Joint List's 13 seats only added fuel to the fire already raging on Balfour Street after Netanyahu poured so much effort into maximizing voter turnout in right-wing strongholds and suppressing the Bedouin vote in the Negev. Netanyahu ran an ugly campaign, based on incitement and even borrowing from the anti-Semite playbook in his attacks on the Arab population. No methods were out of bounds, as evidenced by the chatbot text that he sent to his supporters that claimed, "Arabs want to annihilate us all — women, children and men.”

Though the polls didn’t show it growing in strength, the Joint List won 13 seats in this election (compared to just 10 seats in April). Furthermore, the voting rate among the Arab sector rose to 60%, while the general voting rates were about the same in September as they were in April. (Contrary to the language used by Netanyahu in the past, even this time around, Arab voters did not really "come out to the polls in droves." Arab voting rates were actually even higher in some past elections).

It seems as though this time, “the country’s best election strategist,” as Netanyahu once described himself in a 2016 conversation with former Labor chair Avi Gabbay, made a serious strategic mistake in going for the jugular of Israel’s Arab citizens far too early in the game. In the past, Netanyahu would wait to incite against the Arab population until election day or shortly before it.

True, this election began with what the Arab population regarded as two positive articles in Haaretz and Makor Rishon. It is unlikely that the author of these articles, Netanyahu confidant Nathan Eshel, would have published them without Netanyahu’s approval. But shortly after their publication, Netanyahu changed direction. His election campaign turned into a relentless persecution of the country’s Arab citizens. The proposed camera law was followed by accusations of “stealing the election” and an endless barrage of incitement.

This incendiary campaign went on long enough to rouse Arab voters from their apathy and send them to the polls. Without realizing it, Netanyahu had become an outstanding campaign strategist for the Joint List. He helped the party stir the Arab towns and villages from their long slumber. These discriminatory acts, along with Joint List head Ayman Odeh's statement that he would be willing to join a center-left coalition — an idea supported by 80% of Arab voters — and, of course, the reunification of the Joint List contributed to raising the voting rate among the Arab sector. However, the lion’s share of the credit should go to Netanyahu himself.

The Arab sector showed a certain maturity in this election. It overcame its dissatisfaction and anger with its representatives and went out to vote because it saw a chance to have a real impact on the outcome, unlike so many previous elections. The inevitable conclusion is that the Israeli center-left will not be able to replace the right-wing government without the support of the Arab population. If Gantz continues to ignore the Arab sector — if he continues to send the message that the Arab population has played its part by bringing down the Netanyahu government and expects the Joint List to recommend him to form the next government without paying for the endorsement — the center-left could quickly find itself back in the opposition for many long years to come. No one in the Arab sector is willing to hand out free gifts anymore.