Blue and White head Benny Gantz' rejection of forming a government with the Joint List has left the Israeli election campaign even more deadlocked than the two previous ones. 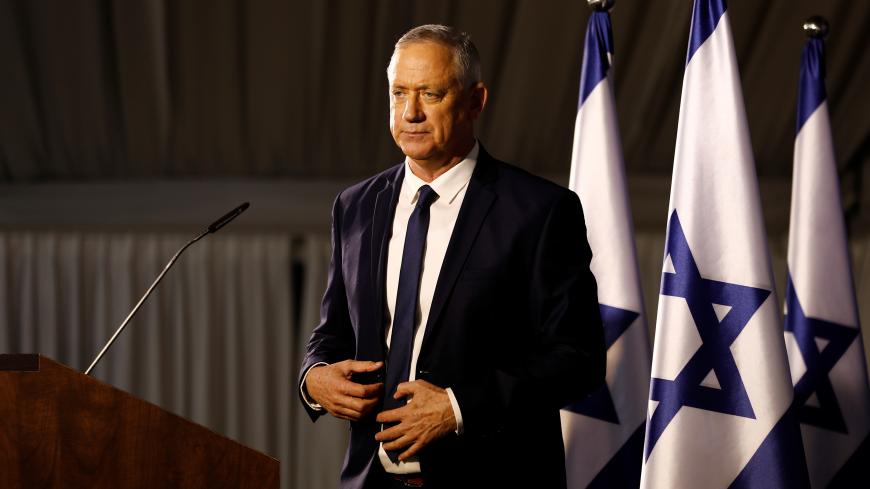 Two weeks after Benjamin Netanyahu stood beside President Donald Trump at the unveiling of the US peace plan, it turns out that none other than Blue and White Party chair Benny Gantz gave him the greatest election gift of all. The announcement didn’t break the deadlock in the polls, as Netanyahu was hoping. The good news came from an entirely unexpected direction. It happened at an election rally on Feb. 11, when Gantz disavowed any potential ties with the Joint List and said that it would not be a part of any government he forms. It only served to expand the emerging gap between him and the party he needs to recommend him to the president to form the next government.

After two elections in the past year, Gantz has learned to be a disciplined campaigner. The distance that he is now putting between himself and the Joint list is all part of a tactical move cooked up by his advisers. They are working under the assumption that once the leftist parties joined together as the Labor-Gesher-Meretz list, there is no longer any risk of the center-left bloc losing votes. This new alliance is sure to pass the Knesset entry threshold and the Blue and White Party is now free to appeal to soft-right voters. They hope that the two or three seats from the soft right that they now hold will not return to Netanyahu’s embrace after the release of the Trump peace plan, which is a dream deal to the Israeli right. The party understands that it must keep this electorate at all costs, even if it means disavowing the Joint List, which includes Knesset member Heba Yazbak. This is why they also supported disqualifying her from running, thus pleasing the right while angering the Joint List.

“The Joint List cannot be part of any government I form. … The Joint Arab List and I are deeply divided on the diplomatic, national and security concerns of the State of Israel. … My disputes with that party’s leadership over national and security issues alone are deep, sharp and irreconcilable,” Gantz tweeted Feb. 11. This is a dramatic statement from someone who embraced the leaders of the Joint List as recently as last September, conferred with them and managed to get most of the party’s Knesset members to recommend him as their candidate to form the next government. At the time, Joint List chair Ayman Odeh considered it to be a historic event and a refreshing example of cooperation that fostered a mood of hope. It now seems that this brief thaw between a center-left Zionist party and the Joint List is over. It means that Gantz would encounter difficulties forming a majority coalition after the March 2 elections, thus probably offering Netanyahu at least a few more months as prime minister.

On the morning of the day Gantz dismissed the Joint List, Odeh gave a dramatic interview to Army Radio. It may have been one of the most important interviews of the entire election season. In it, he attacked Blue and White's behavior over the last two weeks, particularly for the support of senior party leaders for the Trump peace plan. He then demanded that Gantz renounce the plan, making it a condition for his party’s support, saying, “If we don’t hear Gantz make a very sharp statement in opposition to the idea of transfer and annexation, we will not recommend him under any circumstances.”

Odeh also stated unequivocally that there is no chance of him supporting a government that includes Liberman. “We will not support any government in which Liberman is a member. We don’t mean ‘anyone but Netanyahu.’ We are opposed to the path taken by Netanyahu and the right. We want to replace that entire path,” he said.

Odeh left no room for doubt on wether he will abstain. “No,” he declared. “We will vote against it.” When asked if he realizes that by doing this, he would be preventing Gantz from becoming prime minister, Odeh still would not walk back his statement. “We can reach 61 seats without Liberman. There is no way that we would support a government with Liberman and there is no way we would support Gantz, given the positions he has taken over the last two weeks.”

Based on these statements by Gantz and Odeh, it seems Gantz is drifting further away from the prime minister’s office. Compounded by the rhetoric of Yisrael Beiteinu chair Avigdor Liberman, who takes every opportunity to call Arab Knesset members “supporters of terrorism’’ and a “fifth column,” Israel faces an even more aggressive campaign than last election's. Any movement by the Joint List and Blue and White closer to one another have now come to a crashing halt. It looks like more Knesset members will recommend Netanyahu to the president than will recommend Gantz, so even if Blue and White has two or three more seats, Netanyahu will likely be one tasked with forming a government — if the Supreme Court doesn’t intervene first and disqualify him over his indictment.

After the second round of elections, Gantz was very close to becoming prime minister. Back then, Blue and White took a serious look at the possibility of forming a minority government with outside support from the Joint List and with Liberman abstaining. Such a situation would have guaranteed Gantz a majority vote even without 61 seats for his coalition. Given Odeh’s statements this week, however, it looks like the Joint List is taking a tougher stance this time.

Spokespeople for the Blue and White Party as well as Liberman often claim in interviews and statements that there will not be a fourth round of elections, and that a Zionist government will be formed without Netanyahu. Such statements are nothing more than a combination of wishful thinking and psychological warfare. They are based on the assumption that Netanyahu’s bloc will fall apart after the election, that Yamina (or at least part of the party) and maybe even one of the ultra-Orthodox parties will join them, or that the Likud will replace Netanyahu. But such a picture is not realistic. First of all, Netanyahu’s position in the Likud is stable and there is no chance of him being deposed. Furthermore, while the anti-Netanyahu camp is far from united, with many irreconcilable differences between the various factions, as Gantz himself admits, the center-right bloc is very solid and unified. Furthermore, none of the squabbles between Netanyahu and Yamina’s Naftali Bennett have long-term political repercussions. Yamina will not recommend Gantz even if Netanyahu has been toying with the party and has grown his own at its expense. Furthermore, the ultra-Orthodox parties will go with Netanyahu freely and willingly.

“It is a balance of terror. We have no choice. What do you want us to do, form a government with Liberman?” an ultra-Orthodox minister commented to Al-Monitor on condition of anonymity. “Ninety-nine percent of our electorate wants Netanyahu to be prime minister. We are with him."