Is Blue and White strong enough for life in opposition?

The election results have relegated the Blue and White Party, a team created solely to topple Prime Minister Benjamin Netanyahu, to the opposition benches. 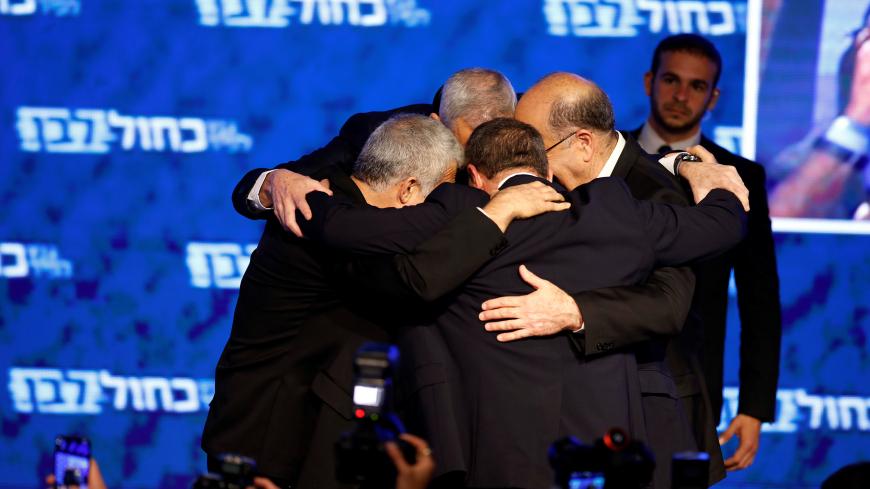 Optimists in the Blue and White Party predicted during the election campaign that winning 34 to 35 seats in the 120-member Knesset would be a political watershed. Any figure above the target, said the strategists of the newly minted party established to unseat Prime Minister Benjamin Netanyahu, would guarantee them power.

On April 9, it turned out they had met their optimistic target but lost the fight. Prime Minister Benjamin Netanyahu’s Likud won the same number of votes for his Likud party, but is better positioned to form a government due to the strong showing of the right-wing bloc and its numerical advantage over the left and center-left. On April 11, after the final results were published, the Likud got one extra Knesset seat, reaching 36 mandates.

In fact, Netanyahu has devoured the right, wiped out his nemesis Naftali Bennett of the New Right Party, eliminated the outcast Zehut Party of Moshe Feiglin that had been a thorn in his side and managed to contain the ultra-right United Right Party, still leaving him sufficient partners with whom to form a stable government, his fifth. On the other hand, Lt. Gen. (res.) Benny Gantz and his Blue and White co-chair Yair Lapid brought Labor to a historic low by pirating its voters, leaving them with very few significant partners with whom to form a government. The fact that Israel’s Arab parties are not considered viable partners by the center-left and are not players in the coalition maneuvering makes the task of this political bloc virtually impossible.

What happens now? Blue and White was established on the fly to achieve a single goal: bringing down Netanyahu. It is led by a quartet consisting of former military chief Gantz, who hooked up with another former chief of staff, Lt. Gen. (res.) Moshe Ya’alon, who had formed the Telem Party. The two then joined forces with Lapid and drew in a third former military chief, Lt. Gen. (res.) Gabi Ashkenazi. It all happened within two weeks and two and a half months prior to election day. This patchwork creation is composed of representatives from the political right and left, social activists and additional generals (two former major generals, two police commissioners, a former deputy head of the Shin Bet agency and a former deputy Mossad chief). The quartet runs this strange hybrid from what has been dubbed “the cockpit,” with Gantz at the controls and the other three as co-pilots. Whether this strange creature can survive in Israel’s political jungle and opposition exile is unclear.

In 2005, Prime Minister Ariel Sharon formed a similar party, Kadima. Netanyahu sought repeatedly to dismantle Kadima and cannibalize it for his Likud, but failed. Kadima nonetheless disintegrated less than a decade later. Is there sufficient glue within Blue and White to ensure its survival and ability to challenge the next Netanyahu government from the benches of the Knesset opposition?

“It all depends on what the interests are,” a senior party figure told Al-Monitor on condition of anonymity. “It all depends on the alternatives. Right now, we are united behind one goal and none of us has other options. We are here to stay.”

Let’s start with Lapid. This is his third election campaign. If he bows out now, so soon after aligning himself with Gantz and company, he will lose the political capital he has accumulated and Yesh Atid will become a niche party devoid of real prospects. Lapid has to stay the course. The same goes for Gantz. He has no political experience and has no reason to give up after winning 35 Knesset seats in his first ever run for office. Ya’alon made the best deal in aligning his tiny Telem, which has no electoral base, with Gantz and Lapid and turning himself into a significant political force. He is not going anywhere, either, nor is the charismatic and popular Ashkenazi, who has told associates that Blue and White intends to provide an alternative to Netanyahu, protect Israel’s democracy and keep going.

Netanyahu’s possible indictment in three cases of suspected corruption makes any talk of a Likud-Blue and White unity government irrelevant. Even if some magical formula can be found to make it possible, such a government would fall apart once Attorney General Avichai Mandelblit makes his final decision to indict Netanyahu, expected by the end of the year. Would anyone bother forming a unity government for eight months? Probably not.

The only one who could reshuffle the cards is US President Donald Trump with his impending “deal of the century” for Israeli-Palestinian peace. The Washington rumor mill suggests its unveiling is near. Are Trump and Netanyahu coordinating? Might the US president bring to bear his considerable weight to convince Gantz, Lapid and their fellows to help Netanyahu make history? The prospects of such a scenario are slim to nil.

Right now, the guys over at Blue and White are high on motivation and good intentions. “We have almost half the people behind us,” another senior party source told Al-Monitor on condition of anonymity. “People who voted for us and view us as their last hope, the final barrier to the destruction of Israeli democracy. We cannot disappoint them.”

Blue and White’s game plan is to operate like a disciplined military unit and try to “make life miserable” for Netanyahu, as Lapid announced on April 10. There is, however, a world of difference — or more precisely, a wide and dangerous expanse of desert — between the military discipline ingrained in the party heads and the rest of the political arena. Most of the party’s new Knesset members are political novices clueless about political work, and they may be deeply disappointed to realize that life in the opposition is hard and unrewarding most of the time. Not all are likely to survive the adventure.

Meanwhile, Netanyahu has been busy. He is trying to engineer a blitz to bring Kahlon and his small Kulanu Party back into the fold of the Likud. Also on his agenda is a bid to dismantle the United Right alliance and pull its less radical wing led by Rabbi Rafi Peretz (HaBayit HaYehudi) into a mega-Likud comprised of over 40 Knesset members. It would hand him ultimate control of state affairs with the support of the disciplined, obedient 15 Knesset members of the ultra-Orthodox Jewish parties and make the task of the Blue and White opposition tougher than ever.

Blue and White has set itself a target of undermining Netanyahu’s legitimacy. “It is inconceivable,” one of the party’s putative Knesset members told Al-Monitor on condition of anonymity, “for half the people of Israel to ignore the fact that we have a prime minister under suspicion in three criminal cases who will soon be indicted for bribery. The existence of Blue and White, a party with tremendous electoral backing and broad support, provides a real alternative to Netanyahu’s corrupt regime.”

The party is now waiting for the evidentiary material and testimony against Netanyahu, expected to leak out once Mandelblit hands it over to the prime minister’s legal team. Senior party officials are hoping the material will highlight the extent of government corruption under his aegis. “We have to lead a broad public protest against the phenomenon of corruption in general and by Netanyahu in particular,” one party member told Al-Monitor on condition of anonymity. “We have to take control of the public discourse and the street, to display our presence and set the agenda. We must not give Netanyahu a chance to evade this truth contained in the hundreds of binders of investigation material. This will be our test and this will be our mission.”

This determination will come up against one of the most skilled politicians in Israeli history. Netanyahu proved during the recent campaign that he is still going strong and that he can deconstruct and reconstruct any agenda. On the other hand, Blue and White has finally provided a counterbalance. We are witnessing a heavyweight fight between two almost equal forces that has just begun.