Naftali Bennett might be the first to serve as prime minister, but alternate Yair Lapid will be the strongman of Israel’s new cabinet. 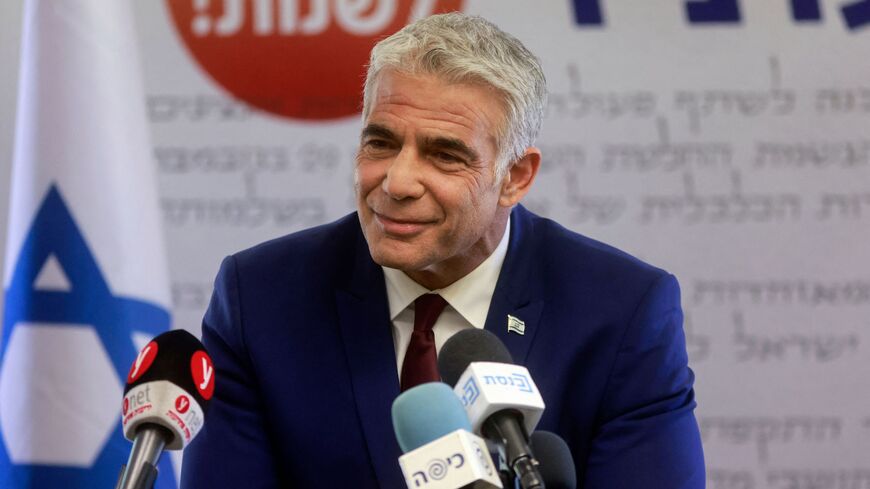 Leader of Yesh Atid Yair Lapid gives a statement at his party's office at the Knesset in Jerusalem on June 7, 2021. - MENAHEM KAHANA/AFP via Getty Images

Barring any last-minute surprises, Yamina chair Naftali Bennett will be sworn in as prime minister of Israel on June 13. Unlike any of his predecessors, he did not form his own government, and he will not control it. It was Yesh Atid leader Yair Lapid who was mandated by the president to establish the new cabinet.

Prime Minister Benjamin Netanyahu will head to the opposition benches after 12 consecutive years in office. In the last few years, he dominated Israeli politics, singlehandedly controlling every aspect of government, in a manner so extreme that he was accused of authoritarian tendencies.

What will the new government look like, and who will actually run it? It will probably take a few months for the extent of the changes to become clear. It seems as though the center of power in the new government will not be concentrated in one person. As information about the coalition agreements starts to leak out, Bennett is looking like a weak prime minister, subject to pressure from all sides. It is not at all clear how he will be able to govern.

While questions regarding the kind of government that Israel can expect are of enormous significance, the only answers so far like in slogans like “anyone but Netanyahu” and platitudes like “government of change” and a “government of healing.” They appear aplenty in the foundational documents of the new government with banalities and bromides like, “The government will work to mend the rifts between the various parts of Israeli society and fortify Israel’s foundations as a Jewish and democratic state, in the spirit of the Declaration of Independence.”

But the government’s actual agenda remains hazy: “The government will work to strengthen Israel’s national security and safeguard the security of all Israeli citizens, alongside its constant pursuit of peace.” In the agreement’s final version, there is no mention of any agreement “to avoid acting unilaterally,” even though according to numerous publications, that statement appeared explicitly in earlier drafts of the coalition agreement.

Beyond these very broad expressions of desire for change, Israel is experiencing a tectonic shift. Never in all of Israel’s history has there been a prime minister who did not manage the coalition negotiations personally. In this case, however, Bennett has relegated the task to Lapid, who will be the next foreign minister.

Officially, Lapid will serve as alternate prime minister and foreign minister. In practice, political analysts estimate he will be the strongest person in government and the ultimate arbiter, together with the new finance minister, Yisrael Beitenu chair Avigdor Liberman. He has concentrated enormous power in his own hands, and it will be felt by all the other ministries. Lapid, like Bennett, will have veto power over every government decision, so every policy will be decided jointly by both men.

Remarkably, Bennett spent his election campaign warning about how dangerous Lapid is. He cautioned his supporters that Lapid was part of the far left, and then promised that he would never allow him to become prime minister. Then again, he also promised not to sit in the same government as the Arab Ra’am or any other party on the left, appealing to his right-wing base. Then he violated them all. Over the last few weeks, he scoured his social media accounts and erased any evidence of his broken promises. Of course they can still be found online anyway.

As the final coalition agreements come to light, it's becoming obvious that the new prime minister will lack any real power to instigate change.

Yamina, led by Bennett, and Yesh Atid, led by Lapid, signed a coalition deal that will serve as an umbrella agreement for all the other coalition agreements, defining the general guidelines of the future government and how it should function. The six other parties in the coalition signed agreements only with Yesh Atid, since Lapid was the one holding the mandate from the president. Thus, only Yesh Atid has a commitment to the other parties.

The future premier is thus not officially part of the agreements with the other partners. It seems to have been done intentionally to overcome the sharp ideological differences and opposing worldviews of the various coalition partners, which run from far right to the extreme left.

Take, for example, the agreement with Meretz, a party headed by an openly gay Knesset member, Nitzan Horowitz. This agreement includes a commitment to advance the rights of the gay community. On the other hand, the agreement with the Islamist Ra’am, headed by Mansour Abbas, contains no mention of GLBTQ+ rights. This should come as no surprise. The party considers homosexuality a sexual perversion. The leader of the party said as much explicitly this week: “No law pertaining to deviants will be passed with the support of Ra’am’s votes. They know that this is our position and that we are serious about it. If they have the majority to push such a law through by force without our votes, that is their business, but under no circumstances will we take part in that.”

The agreements also state that the addition of other parties to the coalition once the government is formed would require the approval of the prime minister and the alternate prime minister, meaning that Bennett will be impotent to change the make-up his own government.

Other clauses in the various agreements that show how weak Bennett will actually be concern the Knesset’s important committees and forums. These agreements determine that the topics of all discussions by the government and its committees will be determined on the basis of an agreement between the serving prime minister and the alternative prime minister, each with the power to veto the other. Voting power in the government and the ministerial committees will be equal, and the serving and alternative prime ministers will have ministerial responsibility for the parties in their respective blocs.

The Security Cabinet will consist of 12 members, divided equally between the two blocs, The serving prime minister will determine the agenda of its meetings.

To complete the picture, it is important to note that the person heading the largest party in the country — and by a significant margin — is Netanyahu, who controls 30 seats. In all of Israel’s 73 years, the prime minister has headed the largest party, with one exception in 2009, when the Likud, headed by Netanyahu, had 27 seats, while Kadima, headed by Tzipi Livni, had 28, yet sat in the opposition.

Moves are underway to prevent Netanyahu from running for the Knesset in the next election by introducing a change to the Basic Law. This effort is spearheaded by New Hope  leader Gideon Saar, who lost to Netanyahu in a Likud primary. This highly specific law affecting one person may not be approved by the Supreme Court. Nevertheless, it offers a window into the less glamorous aspects of the impending change facing Israel.