The swearing-in featured Likud and Religious Zionism lawmakers cursing and insulting the new government in a taste of what the opposition has in store for new Prime Minister Naftali Bennett and his shaky coalition. 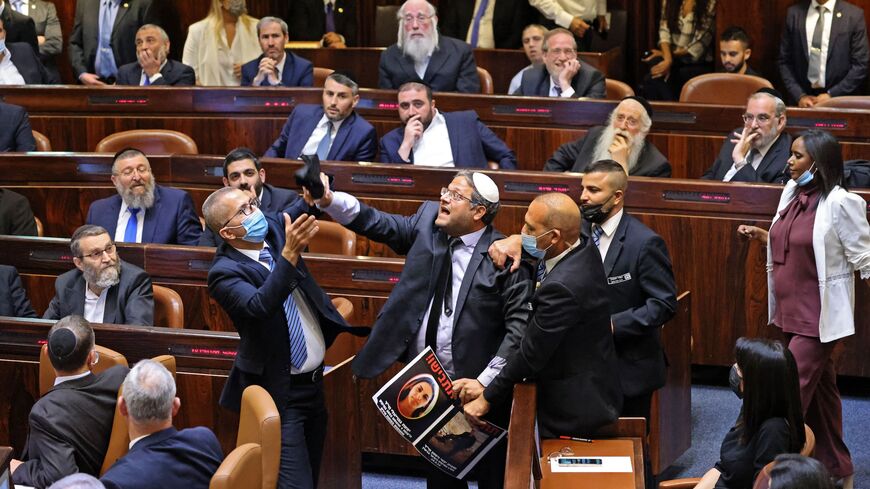 Israeli Knesset member Itamar Ben-Gvir, who heads the Jewish Power (Otzma Yehudit) party, gestures as he's held back during a special session to vote on a new government at the parliament in Jerusalem, on June 13, 2021. - EMMANUEL DUNAND/AFP via Getty Images

The swearing-in of Israel’s new government on June 13 was one of the most turbulent events in the Knesset's history. The ceremony was interrupted with jeers from the new opposition. It was somewhat to be expected, given the political chaos in Israel for the past two years. The historic coalition was formed to put an end to former Prime Minister Benjamin Netanyahu’s long term in office. It achieved that one goal, but now it faces a complicated social and political reality that could bring it down like Netanyahu himself.

Usually a new coalition's balance of power and breakdown into blocs are clear, but not this time. The new government was approved by a single vote, with 60 Knesset members voting for and 59 voting against and one abstention. Prime Minister Naftali Bennett and the members of his change bloc will have to ensure that they have the majority needed for every single vote. With a bellicose opposition led by Netanyahu, it will be a Sisyphean task.

Yesterday played out like the denouement of a Shakespearean drama. Bennett, now 49 years old, was chief of staff to Netanyahu when he last served as head of the opposition. Netanyahu was his mentor. Bennett admired him so much that he named his eldest son Yoni after Netanyahu’s late brother who was killed in the Entebbe raid in 1976. Then Bennett took him out.

Many people now say that it was bold and patriotic of Bennett to break his promise to his right-wing electorate by forming a government with parties on the left and even an Arab Islamist one. But what is seen as an act of courage by those Israelis who longed to see Netanyahu gone, is seen as political betrayal by the other half of the country.

Shouting and jeering accompanied Bennett’s inaugural address to the Knesset. There were endless interruptions by Knesset members from the Likud shouting that he was a “liar” and a “cheat,” giving voice to the feelings of most voters on the right.

The opposite scene played out at last night’s victory celebration in Rabin Square in Tel Aviv, where it was Netanyahu who was disparaged and insulted. In an apparently improvised song, singer Ahinoam Nini included the line “We got rid of Haman,” comparing Netanyahu to the villain in the Book of Esther.

“Tel Aviv is celebrating, but the country’s periphery is in mourning,” Likud Knesset member David Bitan told Al-Monitor when the inauguration was over.

Israel’s new government is a “government of change” in every sense of the term. It represents a shift in Israeli politics, and the cabinet will be Israel's most diverse ever. It will have more women and two Arab ministers, including Issawi Freij of the leftist Meretz. The party is returning to the halls of government after 22 years in the opposition.

Bennett will apparently be a weak prime minister who is easily extorted in a government also controlled by Foreign Minister Yair Lapid, who is the alternate prime minister, and Finance Minister Avigdor Liberman. Bennett heads a party with just six seats and very little public support. His coalition partners are well aware of the circumstances that led him to the prime minister’s office. On the other hand, he is still prime minister. He has been given a once-in-a-lifetime opportunity to show that he is fit to serve in this lofty position.

Yesterday, just two hours after his government was sworn in, the coalition partners met to raise a toast while their supporters and families cheered. Then Bennett received a phone call from US President Joe Biden. Biden’s warm words to Bennett signaled that the US administration is eager to work with him, and Bennett is expected to visit the White House.

But even with all the well-wishing, there will be diplomatic and security challenges ahead. Bennett will have to tread carefully in a government that is ideologically polarized. A large part of his coalition supports the creation of a Palestinian state, while his own segment crept further to the right during the Trump administration. Then there is the nuclear agreement with Iran, which is back at the top of the agenda. Will Bennett challenge Biden, like Netanyahu challenged President Barack Obama? Or will he align himself with Biden’s approach?

What is certain is that Netanyahu will stand up to him, reacting to every action and statement that Bennett makes about security and diplomacy.

It is fair to say that Netanyahu will be both a blessing and a curse to the new government. His insistence on remaining in politics is the glue that will keep the coalition together but he will also be a shadow haunting their every move.

Netanyahu's speech yesterday may have been even more significant than Bennett's. He told his million-plus supporters that he intends to stay on and fight, repeating the catchphrase from "The Terminator" “I’ll be back.” He told his Likud base, “Don’t be upset and don’t give up. Stand tall. I will lead you in a daily struggle against this dangerous left-wing government. With God’s help, it will happen much sooner than you think.”

However, Netanyahu reportedly told people in private conversations over the weekend that it will take some time before this government falls. In fact, he estimated that it could take between a year and a half and two years. In political terms, that is enough time for everything to be turned upside down. He may also have to rehabilitate his own status in the Likud after losing power.

Netanyahu’s speech did not include any congratulatory remarks to his successor. He did not wish the new government the best. This detail alone makes it clear that Bennett’s new coalition will not have a single day of peace. Netanyahu will leave Bennett to flounder and thrash about on his own as he struggles to lead the country.

Israel unseated the person who led it for a total of 15 years — more than any other prime minister before him. But the man often called a political phoenix is assuming the mantle of leader of the opposition for the third time in his career, a position he knows how to work from as he fights to regain power. In the next few months, Israelis will have a better idea about what lies ahead for the new government. How united is it really? Will Bennett grow into the role and show real leadership ability? Will Netanyahu survive the internal struggle brewing in the Likud and run again in the next election? Israel got the change it wanted, but at the cost of political stability.